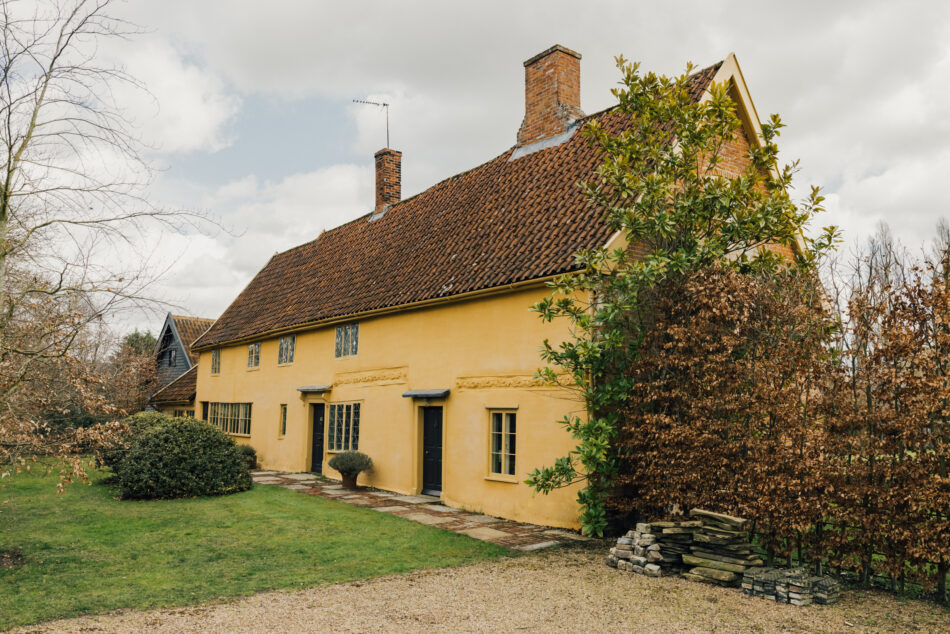 “Clues to how the house has been used over the centuries are imprinted in its fabric” - Ros Byam Shaw, author

York’s Tenement, an incredible timber-framed Suffolk farmhouse, is believed to mainly date from around 1592. The house extends over 3,390 sq ft and has been lovingly restored by the current owners during their years of guardianship. It is surrounded by extensive private gardens landscaped in the classical English style, and well located in the pretty village of Yoxford, a stone’s throw from the coast and the celebrated towns of Aldeburgh and Southwold.

The house has medieval origins, but largely dates from about 1592 (with some later additions). The current owners have lived in York’s Tenement since they bought it in 2008; they undertook an extensive restoration of the house, preserving its character by keeping an abundance of original details, whilst making it fit for modern living.

When they first bought it, many of the house’s original features and much of its history were hidden: the walls and ceilings had been straightened with plasterboard and partitions had been used to create smaller rooms. There was also carpet throughout the upper floor, hiding the beautiful floorboards. During their restoration, the owners made some rare finds, revealing all of the original floors on the first floor complete with old strips of tin used to mend the boards. They also carefully removed a brick infill to reveal the interior of a Tudor inglenook fireplace.

York’s Tenement is approached down a private driveway that leads to parking space for multiple cars. Entry is straight into the heart of the home to an open-plan dining room and kitchen that runs tyhe width of the house, benefitting from a dual aspect and all-day sunlight. To the left is the kitchen, complete with an Aga which sits opposite the original workbench. Their more modern appliances are hidden in a utility room to the rear, where there is also a butler sink and WC. Characterful flooring runs underfoot, a combination of stone slabs, bricks, terracotta tiles and oak planks. It is thought that this part of the house was once used as a workshop. A wooden staircase leads to a room above the kitchen, currently used as a study. Here, the vestiges of thick dried paint lines the walls, which dates back to when this room was part of the workshop below.

In the dining room, there is a large open fireplace with a Bressumer beam over it, and a door that opens onto the garden. Beyond is the sitting room, the floor lined with hardy East Anglian floor-bricks, and with more exposed beams overhead which have been painted in Farrow & Ball’s “Cord” to match the walls. An inglenook here provides a focal point around which the current owners have arranged their furniture. This room would once have been double-height with a hearth in the middle, but was divided in the 16th century to create two floors. Adjacent is a wine cellar/storage room; a single-storey room and is possibly the oldest in the house. It has a medieval mullioned window which is now blocked in. This room would once have been used as a dairy and retains its drain in the floor.

Adjacent is the “Regency Room” which lies in the ground floor extension, likely to have been added in the early 1800s. This has the original decorative door surround, a Regency fireplace and windows which frame views of the garden. At the end of this floor is a drawing room/study, with delicate casement windows on the gable end, another open fire and inbuilt shelving. This room has a return door to the entrance lobby.

From here, a staircase ascends to the first floor and the bedrooms. The first-floor landing has floorboards of exposed oak, with traditional tin strips fixing some of the boards. The principal bedroom has an en suite bathroom with a pitched ceiling and floorboards painted in Farrow & Ball’s richly coloured “Terre d’Egypte”. The Regency extension houses another bathroom; a beautifully light room with views from the freestanding cast-iron bath over the garden.

Set opposite Cockfield Hall, the main entrance leads from the road to York’s Tenement, meandering past paddocks en route. A high beech hedge separates the driveway from a second entrance, shared with the neighbouring house. Immaculate south-facing formal gardens are located to the rear, executed in a traditional English style to present a bucolic view of nature. They are enclosed within parkland-style fencing and mostly laid to lawn, interspersed by a number of mature trees.

Immediately surrounding the house is a brick terrace, a sun trap in the summer and perfect for outdoor dining. Beyond is an open-fronted cart lodge surrounded by more gardens, which extend approximately one acre around the house. Further afield are wildflower and water meadows next to the River Yox. There is a former well, a useful brick and flint constructed store, a separate closed courtyard area and gate providing access to the secondary driveway, a potting shed and a lean-to wood store.

The land is almost entirely stock-proofed and has been let to a sheep grazier on an annual basis. At the end of the garden is a pretty, private spinney.

Yoxford, a charming historic village a few miles inland from Dunwich on Suffolk’s Heritage Coast, sits between Southwold and Aldeburgh. The village has two pubs, a restaurant, a post office, a primary school and several well-regarded antique shops. The wider area has an abundance of great pubs such as The Eel’s Foot Inn at Eastbridge, good restaurants, and wonderful local food suppliers, including Emmett’s Deli. More extensive facilities are available in the nearby towns of Saxmundham (Waitrose & Tescos) and Framlingham (included in The Times’ list of the “10 Best Places in the UK to Live for Families”).

The railway station at Darsham is a three-minute drive where trains into Ipswich connect with trains to London Liverpool Street.

The World of Interiors – September 2012

Please note that all areas, measurements and distances given in these particulars are approximate and rounded. The text, photographs and floor plans are for general guidance only. Inigo has not tested any services, appliances or specific fittings — prospective purchasers are advised to inspect the property themselves. All fixtures, fittings and furniture not specifically itemised within these particulars are deemed removable by the vendor.
York's Tenement — Yoxford, Suffolk
Interested? Let’s talk