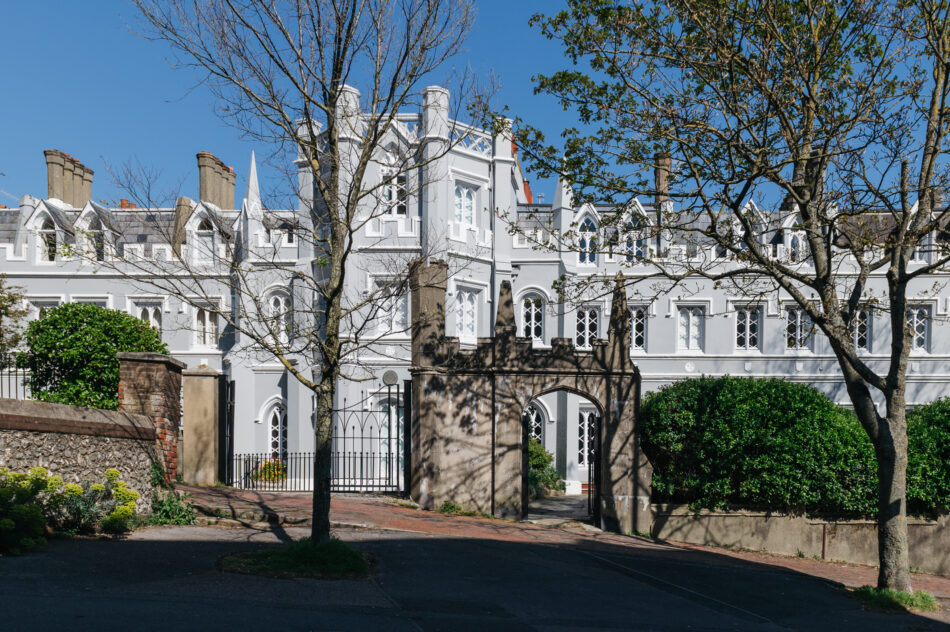 This charming three-bedroom house is situated below Brighton’s ancient parish church of St Nicholas. It is positioned in the middle of Wykeham Terrace, a Grade II-listed confection of 19th-century Tudor-Gothic revival style. Built around 1830, it is attributed to architect Amon Henry Wilds and has a light stucco façade with dramatic Gothic arch windows. Thick walls and deep-set lancet windows lend a sense of ecclesiastical calm to the house, and it is only a few minutes’ walk to The Lanes and the bustling Brighton seafront. Extending to around 1,800 sq ft and arranged over four floors with a courtyard garden and cellar spaces, this has been a happy family home for many years to the current owners and retains many of the original period features.

Built around 1830, Wykeham Terrace nestles into the ridge under the old church and is set back from the road behind gates. The terrace was conceived as a residence for the burgeoning population and was home to a variety of philanthropic causes in the 19th century. The early 20th century saw the whole terrace purchased by the Territorial Army to provide accommodation for military families. Today the terrace is a well-maintained, Grade II-listed example of characterful Brighton architecture. For more information, see the History section.

The house is set back from the street behind a pinnacled front wall with original ironwork. Ensconced in the handsome row of grey and white stucco houses, the façade is a romantic medley of Gothic, Tudor and Regency elements, often seen in 19th-century Brighton architecture.

Upon entry to the house, light streams in through the dramatic double lancet window in the hall. The living room is at the front of the plan, an open space accentuated by a pair of gothic windows with flat hood moulding. The original fireplace acts as a centrepiece for the room. Here, a moody palette is employed, and original floorboards run underfoot. Curvilinear lines, original decorative architrave and bi-fold doors divide the open space from the rear, currently used as a study.

Downstairs there is a spacious open-plan kitchen and dining room with a slate tiled floor, opened fire breast and cast-iron radiators; windows overlook a small terrace at the front. At the rear, a garden room lets in swathes of light, and a pair of French doors provide access to the courtyard. There is ample built-in storage under the stairs, a utility room and a WC.

The main bedroom is at the front of the second-floor plan and features deep-set gothic gable windows, overlooking a parapet, a striking fireplace, and cast-iron radiators. At the rear of the second floor is the generous family bathroom with a separate shower stall, free-standing bath and cast-iron radiator. A sizable skylight at the top of the house floods the stairwell with light.

The first and second floors house the three bedrooms and the main bathroom. At the front of the first floor, there is an en suite bedroom with its original fireplace and dramatic windows; a smaller back bedroom overlooks the courtyard.

A central courtyard is the focal point of the lower ground floor. A garden room extends along the side of the courtyard with substantial glazed French doors, which open out into the outdoor space making the area feel connected to the other rooms on this floor. The space acts as an additional outdoor room for alfresco dining and entertaining in the warmer months. A smaller terrace at the front of the plan allows light into the front of the ground floor space, while a door provides access to the ample cellar storage area extending under the space to the front of the terrace.

St Nicholas Rest Garden is just outside the front gates of the terrace, with large green areas and gardens adjoining the historic churchyards. Brighton’s charming shingle beachfront is less than a 10-minute walk away.

Wykeham Terrace is a stone’s throw from the beach and minutes from The Lanes. A warren of narrow, twisting alleyways, The Lanes were once the centre of the fishing village of Brighthelmstone, and it still features many late 16th and 17th-century houses.

This lively area is now known for upmarket restaurants, quaint tea rooms, and traditional pubs. The bohemian and ever popular Kemptown is a 20-minute walk away and is known for its cafes and delis, bars, independent shops and the annual carnival.

The historical charm of neighbouring Lewes and the natural beauty of the South Downs are both within 10 miles. Brighton Rail Station is less than a 10-minute walk from the house and offers direct trains to various London stations, each taking around an hour.

Clustered on the ridge around the ancient parish church of St Nicholas, the medieval settlement of Brighthelmstone was little more than a bucolic fishing village plagued by French raids through much of the 16th and 17th centuries. With the arrival of the 19th-century passion for cold water bathing, Brighton saw a huge influx of fashionable health seekers.

A flurry of building developed Brighthelmstone into the Brighton we know today. JMW Turner famously captured this transitional phase of the town in a series of watercolours painted around the same time Wykeham Terrace was being constructed.