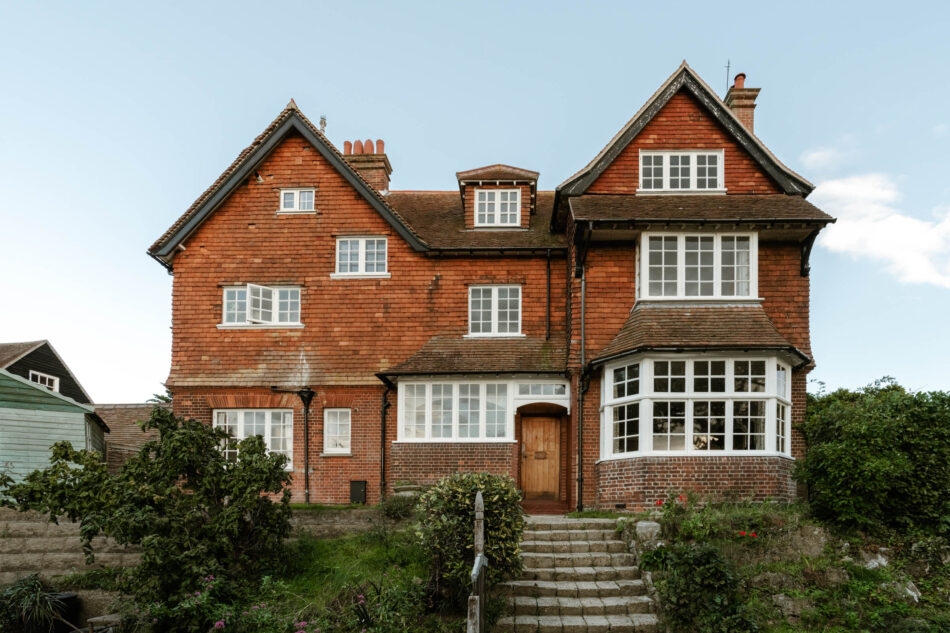 The house retains many Edwardian features, including the wood-panelled fireplace surrounds, floorboards, picture rails and coving

This handsome seven-bedroom Edwardian home in Sheringham, Norfolk, has a wonderful façade constructed from red bricks, with tall gables and extended chimney stacks, typical of the era. The house is angled east-west in orientation to take advantage of the far-reaching views over the town and its coastline and to maximise sunlight throughout the day and the beautiful sunsets over the sea in the evenings. Extending over 3,200 sq ft, the house comprises a lovely open-plan kitchen, living and dining room and an additional, more formal sitting room, as well as a lovely mature garden.

Built in the early 20th century, the house is a lovely example of an Edwardian family house. Constructed from small, likely handmade red bricks and clad in terracotta tiles. Like many of the domestic homes of the time, it demonstrates the era’s innovations and preoccupations, with large bay windows and a simple, almost rustic approach to building, incorporating locally found materials.

The house retains many brilliant original features, including the beautiful wood-panelled fireplace surrounds, floorboards, picture rails and coving. Unusually, the fireplace in the sitting room has a window immediately above it and therefore has a curved flue to allow for this. The interiors remain virtually unaltered and are a fantastic example of early 20th-century design. As such, this unique house may require some updating. For more information, please see the History section.

Entry is into a wide hallway with a raised seating area next to a west-facing window. Immediately in front is the open-plan kitchen and living room, complete with a walk-in pantry and utility room. Wonderfully proportioned, all rooms in the house have big windows that draw light into the plan and original wooden floorboards. The kitchen comprises white cabinetry set against wooden worktops. A striking original fireplace with a tall wooden surround occupies one end of the room, bookended by a tall window and a glazed door.

A large double-aspect sitting room lies at the front of the house with another open fireplace crowned by the window, and a protruding bay window, which frames green views of the front garden. There is also a study and a guest WC on this floor.

On the first floor, a galleried landing leads to three good-sized bedrooms, each with its own fireplace and a family bathroom. From this floor, it is possible to get glimpses of the sea, a view which improves further from the top storey. The second floor is home to another wide landing leading to three more bedrooms and a second family bathroom. In the principal bedroom, part of the ceiling has been removed, revealing the beams and increasing the volume. There is also a characterful exposed-brick chimney.

Outside, there are garden areas on three sides of the property. One is laid to lawn; there is also a vegetable patch and various sunny patio areas. Pretty wisteria grows up the side of the house, next to a greenhouse. There is also a garage, shared with the neighbouring house.

Sheringham is a picturesque coastal town surrounded by woods and heathland with quaint back streets. The town has retained its old fishermen’s quarter, where brightly coloured crab boats are moored on the beach below the promenade.

The town is home to good pubs, restaurants, shops and the popular Sheringham Little Theatre, alongside its café, The Hub. Each year, Sheringham is witness to a week of Viking-themed events in February, as well as a Crab and Lobster Festival, shared with Cromer, in May, and a spectacular carnival in August.

The Norfolk coastal path leads from the town to Beeston Bump, with incredible views over the North Sea, Sheringham and nearby West Runton. There are many pretty villages and towns nearby, including Holt, an attractive rural Georgian town with plenty of facilities, including a market, a clothes retailer called Old Town, an excellent fishmonger and a good game butcher. The Black Apollo coffee shop also roasts its own coffee.

The North Norfolk coast is renowned as one of the most beautiful areas of the UK, with incredible sandy beaches, such as Holkham, and large areas of protected marshland. It is notable for its number of excellent places to eat out, such as Wiveton Hall Café and No. 1 Cromer. A little further afield is the popular Gunton Arms, a traditional pub with rooms in one of the area’s fine historic parks.

From March to October, there are several historic homes to visit, including Sandringham and National Trust properties at Blickling & Felbrigg. The Holkham Estate, with its stunning beach, wildlife reserve and magnificent house and grounds, is within easy reach by car.

Sheringham runs services to London via Norwich. Norwich itself is approximately an hour and 55 minutes from London Liverpool Street by train.

The Norfolk coast has historically been well-known as a place to fish for crabs, lobsters and whelks. Lower Sheringham, where this house is, became more of an urban district in 1901 due to this booming industry.

It peaked during the late 19th and 20th centuries due to the arrival of the railways, which made it possible for fish to be transported more efficiently to markets locally and in London.

Most of Sheringham was built during this period, and there is an interesting range of buildings, some constructed using traditional Norfolk methods using flint and a few Edwardian buildings such as this.