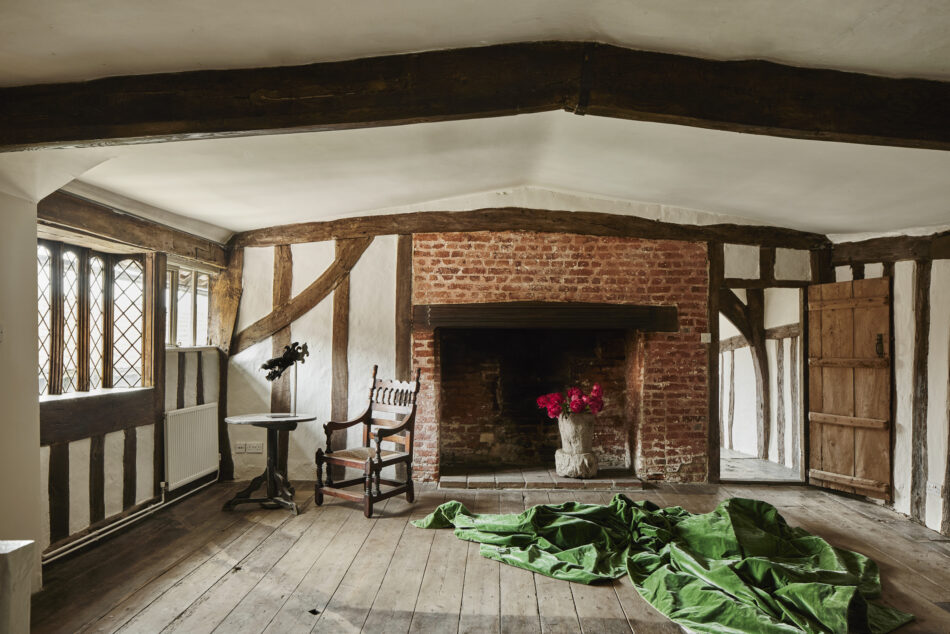 The sophistication of the Tudor remodelling of the gothic house can be seen in the elaborately moulded beams, the oriel window and the four brick fireplaces

This exquisite Grade II*-Listed extended Wealden hall house is located in the beautiful village of Debenham, Suffolk. Arranged over two storeys, it extends to over 3,000 sq ft of internal living space, enriched by magnificent original details and awash with natural tones. The garden stretches behind the house, with the original well and a range of period barns which spans to around 800 sq ft. A lane running from the garden leads immediately to a nature reserve and extensive meadows, woodlands and miles of footpaths and bridleways across unspoilt countryside.

Debenham is within a conservation area and is known for its array of well-preserved medieval and Tudor houses. St Mary Magdalene’s, a Grade I-listed 13th-century church, dominates the street.

The oldest part of the house, The Old Hall, was built in the early 1400s and forms the centre of the house with a clay pamment tile floor. A massive timber ceiling was added to the hall in the early 16th-century. Later, the addition of a grand Renaissance wing at the rear doubled the size of the house. The sophistication of the Tudor remodelling of the gothic house can be seen in the elaborately moulded beams, the oriel window and the four brick fireplaces. Historical analysis has suggested that the luxurious use of timber for the house was linked to the dissolution of the monasteries, which saw the sale of extensive church and ancient woodlands.

The current owners have undertaken extensive research into the history and architectural backstory of the house, consulting such respected vernacular historians as Timothy Easton, architectural, brick and timber specialists from various institutions, and historic paint specialist Pedro da Costa Felgueiras. Their work has revealed original features that were previously hidden. For more information, please see the History section.

The house has a façade of outstanding historical character. The west-facing, timber-framed front, complemented by a giant wisteria, has a distinctive double-height porch with a four-centred arched entry surrounding a grand 16th-century timber door. The entrance reveals a brick floor in early ‘Suffolk whites’ and timber-framed cross-passage with moulded beams.

Immediately to the right of the entrance is the oldest part of the house, The Old Hall, featuring a fifteen-inch deep fluted crossbeam. This room is centred around an impressive inglenook fireplace with a ‘sacrificial hearth’, a vernacular alternative to iron firebacks.  The rear wall of the fireplace consists of tiles laid on edge, which would have been replaced as they degraded; a wood-burner now sits in the recess but the original hearth is visible. A half-glazed Georgian door with 18th or 19th-century initials scratched in the glass leads to a smaller reception room, originally the parlour of the medieval house. A Georgian sash window features an original panelled shutter that recesses beneath the sill.

A further glazed Georgian door leads into the 16th-century wing, The New Hall. A magnificent reception room, ceilings here are of an unusual height for the period, and moulded timbers continue. This stately room, once functioning as a magistrate’s court, has another large hearth, oak flooring and a large window looking onto the courtyard. To the right, is a striking original clerestory, made up of an arcade of small gothic window arches that were sealed off when the neighbouring property was enlarged around 1600. The room also features a walk-in pantry from the 1800s and useful storage space to the left of the fireplace. High ceilings allow natural light to flood from the large windows overlooking the courtyard.

To the left of The New Hall is the 17th-century kitchen or’ keeping room’ with a charming red Rayburn range. A second kitchen or scullery has a door leading onto the stone courtyard and garden. At the rear of the plan is a study or bedroom with an en suite WC and French doors that open onto the garden.

A staircase ascends from The New Hall to a large first floor reception room with three bedrooms arranged around it. The room features a tie beam, a vaulted ceiling, a fireplace, and a distinctive oriel window glazed with early leaded diamond panes. Numerous original floorboards run underfoot throughout the first floor. The arches and studs of the timber-frame create long perspectives and echoing linear patterns that catch the eye in a beguiling way. A bedroom to the rear of the plan overlooks the garden and woodlands beyond. On the left there is a mullioned window overlooking a landing reached by three steps, which offers a unique view of the 16th-century north façade of the house and leads to a bathroom and the main bedroom. Here, a carved section of a beam with a twisted skein or guilloche pattern is a unique example of the early architecture of Tudor House and could be a reference to the village’s source of wealth, the wool trade.

The main bedroom at the front of the plan is en suite. Generously proportioned with a large original fireplace, vaulted ceiling, and leaded windows, this is an airy room bursting with historic features. A door in this room gives access to the porch’s first storey, formerly a strongroom that overlooked the market square; it is now a charming alcove with views through leaded windows.  A third bedroom is adjacent to this main room, showing the beautiful lines of the principal 15th-century frame.

The walled, east-facing garden is blooming with roses, herbaceous borders, and mature shrubs, while a paved courtyard overlooks a box hedge knot garden. The exterior rear façade of the house is striking in feature and painted in the distinct Suffolk Pink hue. Another mature wisteria fills the garden with scent when in riotous bloom in the summer and shades a south-facing seating area. The large well has a pretty ironwork cover and a ladder descending its verdant, ferny sides. A raised bricked area provides a perfect spot for alfresco dining.

An ironwork pergola, with a tangle of wild and domestic roses, leads to the back of the garden and to a small, wild orchard area with mature quince and mulberry trees. Beyond lie the extensive period barns and outbuildings, which are largely untouched and provide scope for a variety of potential uses. A gate opens to a lane that leads from the garden to fields and open woodland, as well as providing access for a vehicle.

Tudor House is located in the attractive village of Debenham on the pretty High Street. Situated roughly halfway between Framlingham and Stowmarket, Debenham has an excellent grocer, butcher, florist and several thriving coffee shops, including the popular River Green Café and deli, as well as a local brewery. The Red Lion is recently reopened as a restaurant and the Woolpack pub, an old-fashioned, licenced beer house, is also on the High Street. Debenham also has an ironmonger, a well-stocked shop, Post Office, and a newsagent. Local farmers’ markets can be found in Framlingham, Eye, Diss and Aldeburgh, and vineyards in Monk Soham and Bruisyard.

The Station and Watson and Walpole are both popular restaurants in nearby Framlingham. The Leaping Hare at Wyken is both a celebrated restaurant and vineyard. A celebrated Spanish delicatessen, Emmett’s, can be found in nearby Peasenhall and an excellent fishmonger in Orford, Pinney’s of Orford. For South Indian cuisine Chennai Dhosa in Ipswich offers further choice in cuisine.

The arts are similarly well served in the area. Snape Maltings and Leiston Abbey host celebrated musical concerts that draw many international musicians. There are also areas of outstanding natural beauty nearby, with nature reserves at Minsmere and Redgrave and Lopham Fenns. The stunning Suffolk coastline with vast tracts of reedbeds, heath and beach is around half an hour by car. Likewise, Sutton Hoo, one of the most important archaeological discoveries of the 20th century, is close (also on the banks of the River Deben, which gives Debenham its name). The village has a historical association with drama; the theatre photographer Angus McBean lived opposite Tudor House, and the filmmaker Emeric Pressburger lived for many years in the next parish (some villagers still remember both of them).

The nearest train station is in Stowmarket, an easy 20-minute drive, with services to London Liverpool Street in around 80 minutes. Ipswich, a 30-minute drive away, provides frequent connections to London, as well as to Cambridge and Norwich.

With origins stretching back to the Iron Age, Debenham (meaning ‘deep valley’) takes its name from the River Deben that runs through it. Evidence shows that the area was settled by both the Celts and later Romans. The evocatively named Blood Field, north of the town, is reputedly the site of a historic battle with the Danes around 870 AD.

Mentioned in the Domesday book of 1086, Debenham held markets and fairs several times a year. The town was a notable dairying centre until a transition in the latter 18th century saw it rely on grain and arable crops. James Cornish, the son of a 19th-century vicar, wrote of trees being felled and hedges removed until: “[the] district was entirely grubbed up and transformed into corn land”.

A significant fire in 1744 saw extensive damage to much of the earlier structure of the town. However, by 1814 it had procured a fire engine to ward against this threat. Debenham is now celebrated for its well-preserved vernacular and medieval architecture.