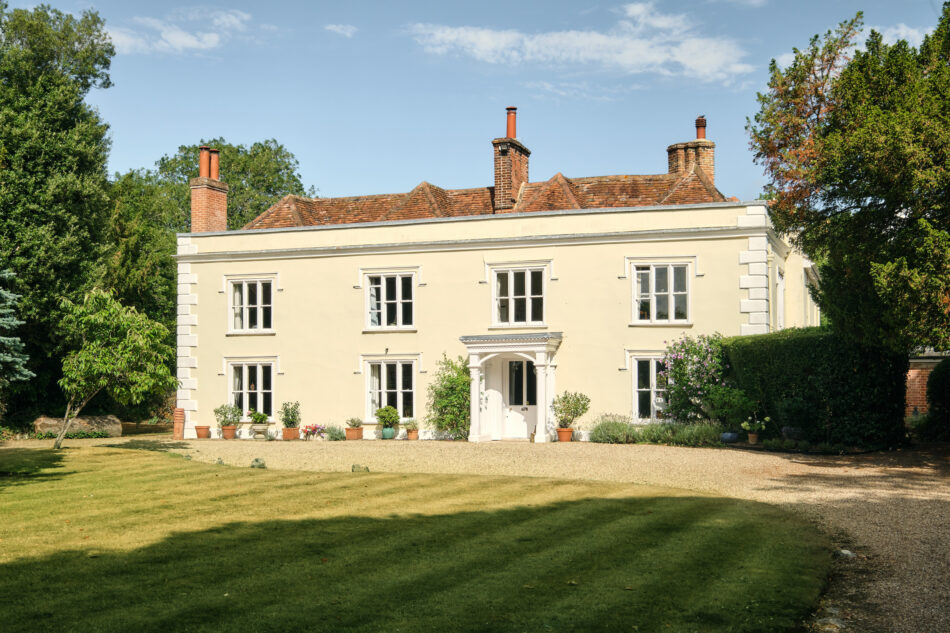 A 16th-century hall house, later extended, resulting in an imposing house with a handsome Georgian façade

This unique Grade II-listed seven-bedroom house in Great Horkesley, Essex, is believed to date from at least the 16th century, with its lovely Georgian façade a later addition. Surrounded by two acres of manicured garden and approached via a formal, sweeping driveway, the house is in a private position on the edge of a pretty village. The house extends over 5,000 sq ft internally, including a separate one-bedroom annexe found in a later addition, a further carport containing an incredible studio space and additional storage.

This 16th-century hall house, with possibly earlier timber framing, was remodelled and extended in the early 19th century, resulting in grand classical proportions externally. The windows were replaced with a collection of wooden tripartite sashes with heavy mullions and hoodmoulds. It was then extended again with a Victorian intervention resulting in a lovely red-brick rear elevation. It had one final extension – the spacious annexe – at some point in the middle of the 20th century. For more information, please see the History section.

Entry is into an exceptionally wide entrance hall. To the rear of the house is the kitchen, a lovely room with two large sash windows, painted in ‘Mizzle’ by Farrow & Ball, bathing it in light and framing views over the garden. The kitchen is serviced by an Aga, as well as a separate oven. Shaker-style cabinetry is set against a dark granite worktop. A door opens into an original double larder. With its original brick floor and slate shelves, this most likely would have been a cool room.

Adjacent is a lovely family room. Again, the wood has been accented in the same gentle ‘Mizzle’, celebrating the original window frames, shutters and panelling. A woodburning stove sits at one end, with two alcoves above, while the original beams run the length of the ceiling.

To the other side of the hallway, through a wide archway, lies a generous dining room. The room has been painted an ochre, set against wooden floorboards. Another wide opening leads down steps to the sunken living room. Both rooms enjoy large fireplace surrounds and working fires.

Stairs ascend to the first floor, passing a large Victorian window, where there is a spacious landing. From here, are four generous bedrooms, two smaller ones currently used as studies. One bedroom has an en-suite bathroom, and there are two further family bathrooms.

To the rear of the house, a corridor leads past a guest cloakroom to the annexe, which is separated from the main house by a door. This is an expansive and flexible space, which the owner has used as a studio in the past, as well as a one-bedroom flat, which can be rented out easily because of its separate electricity meter and oil tank. The living room has a wall of glazing, resulting in a wonderfully bright space. The annexe is serviced by its own kitchen and shower room.

Beautiful, verdant grounds of approximately two acres surround the property, contributing to its feeling of privacy and seclusion. The garden is composed of a combination of lawn and herbaceous borders and an area of preserved, mature trees, which adds to the house’s privacy and seclusion. To the rear of the house is a York stone terrace – the perfect place for outdoor dining – and beyond, an expansive orchard with pears, apples, damsons and cherry plums. The orchard becomes a field of daffodils and wildflowers in the spring, encouraging a wild variety of wildlife.

To the front of the house is a timber-framed barn used in the past for stabling and farm storage. A separate three-bay cart lodge provides plenty of garaging, whilst the studio area sits above.

The house sits on the edge of the pretty village of Great Horkesley, which is situated three miles north of Colchester and just outside the renowned Area of Outstanding Natural Beauty, the Stour Valley. As the former capital of Roman Britain, Colchester is steeped in history, including the beautiful ruins of Colchester Castle, the Roman Theatre and St Botolph’s Priory. The town has an excellent range of galleries, cafes and restaurants, including the Firstsite gallery, The Minories and Hollytrees Museum.

There are several other attractive villages and market towns in the area, including Nayland, Higham, East Bergholt, Dedham and Hadleigh, most of which provide a range of independent shops and public houses. The wider area has several local golf clubs, numerous beautiful walks, bird watching and sailing along Essex and Suffolk’s coast, as well as the River Colne and Stour.

The area is extremely well connected; nearby Colchester station provides regular rail services to London Liverpool Street, from 50 minutes. The A12 is easily accessed from the area and offers access to the M25, London, Suffolk’s coastline and the South-East.

The house is nestled on the edge of the pretty village of Great Horkesley, which is three miles from Colchester. With a long history, the village was named after Horkaslay – the Saxon name for “farmland for herds”, which would mainly have been sheep.

The village is now surrounded by agricultural land, growing a variety of crops. In fact, before farmers drained the land, it would have been exceptionally boggy.