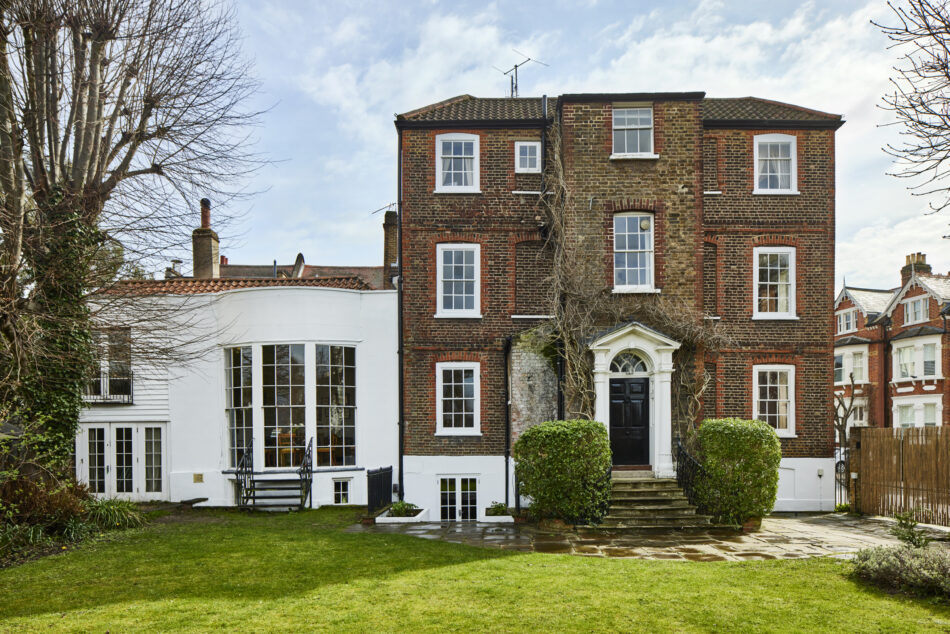 This elegant Grade II-listed house is located on The Vineyard, a coveted residential street moments from the centre of Richmond and the banks of the Thames. It was built during the reign of Queen Anne and features wonderful Regency additions, including a ballroom that looks out onto the private walled garden through curved sash windows. Internally, the house exceeds 3,700 sq ft across four light-filled levels.

The Vineyard meanders north-east from the Grade II-listed St Elizabeth of Portugal Church at its southern end, past a variety of almshouses and Clarence House, a 17th century Grade II-listed house associated with Bernardo O’Higgins. O’Higgins was a Chilean independence leader who liberated Chile from Spanish rule in the Chilean War of Independence (1812-1826); he is commemorated on the wall of the property with an English Heritage blue plaque.

The house lies off a widening bend on a tree-lined section of The Vineyard, where an original red London phonebox still stands on the cobbled pavement. Entrance is via the west-facing garden, through electric gates which lead the way to off-street parking. Formal entry to the house is from the paved perimeter, where tapering stone steps bordered by hedges lead up to the raised ground floor. One of the Regency additions is the entrance vestibule, which extends the chequered-tiled hallway beyond an arched transom where the original door once stood.

To the right is the first of many reception rooms; a beautifully panelled drawing room with an open fireplace and shuttered south-facing windows, which extend across two aspects. To the left of the hall is a family room where afternoons can be whiled away reading; this is also used as an occasional study. Beyond lies the exquisite former ballroom, now a music and living room, with oak flooring and a slate fireplace flanked by bespoke bookshelves. Elegant floor-to-ceiling sash windows curve to frame superb views of the garden.

The lower-ground level is divided into two distinct sections, with a study/reception area at the southern end, and an open-plan kitchen and dining room at the other. This space has stone flooring and painted timber ceilings, as well as an automated electric Aga. From the dining room, steps lead up to the garden through French doors. To one side of the house is an independent annexe, linked to the main house through a storage passage behind the kitchen. This is set over two levels and has a kitchenette on the upper floor.

An ornate timber staircase lined with coir matting ascends from the entrance hall to the upper levels of the house, where two generous bedrooms can be found on each floor. These have charming views over the garden and have been carefully finished with a smart colour palette of blues and greens to create a distinct atmosphere in each space. On both the first and second floor, a bathroom and shower room lie between the bedrooms.

The brick-walled garden is exceptionally private and largely laid to lawn. It can be accessed from the lower-ground dining area and several of the ground floor rooms. Mature trees dot the perimeter and in one corner there is a dedicated seating area for lunches in the warmer months – and the cooler ones, for those willing to brave the British weather. Further planting opportunities abound for those with green-fingered tendencies.

Richmond-upon-Thames is a historic borough of south-west London that was formed in the 16th century during Henry VIII’s reign. It was recently listed as the best place to live in the capital, following a government survey that noted its superb open spaces, excellent eateries, historic architecture, good schools and low crime rate.

The Vineyard is a particularly sought-after residential road near the centre of Richmond. It is within easy walking distance of the restaurants, shops and station at Richmond as well as Richmond Park and the schools for which the area is renowned. At the end of the road is Friars Stile Road, noted for its excellent and comprehensive collection of shops and eateries, namely Italian restaurant, La Luna di Luca, popular gastropub, The Malborough, L’Amandine Patiserrie and Coffee House, Richmond Hill Bakery and The Good Wine Shop. The Richmond Theatre is nearby, as is Petersham Nurseries with its excellent restaurant and garden shop. The River Thames is just a stone’s throw from The Vineyard – the perfect spot for a slow Sunday stroll, and a gateway into central London for avid walkers.

Quick access to central London is available from Richmond train station and Richmond Underground station, which lie a few hundred metres away from the house.

Please note that all areas, measurements and distances given in these particulars are approximate and rounded. The text, photographs and floor plans are for general guidance only. Inigo has not tested any services, appliances or specific fittings — prospective purchasers are advised to inspect the property themselves. All fixtures, fittings and furniture not specifically itemised within these particulars are deemed removable by the vendor.
The Vineyard — London TW10
Interested? Let’s talk