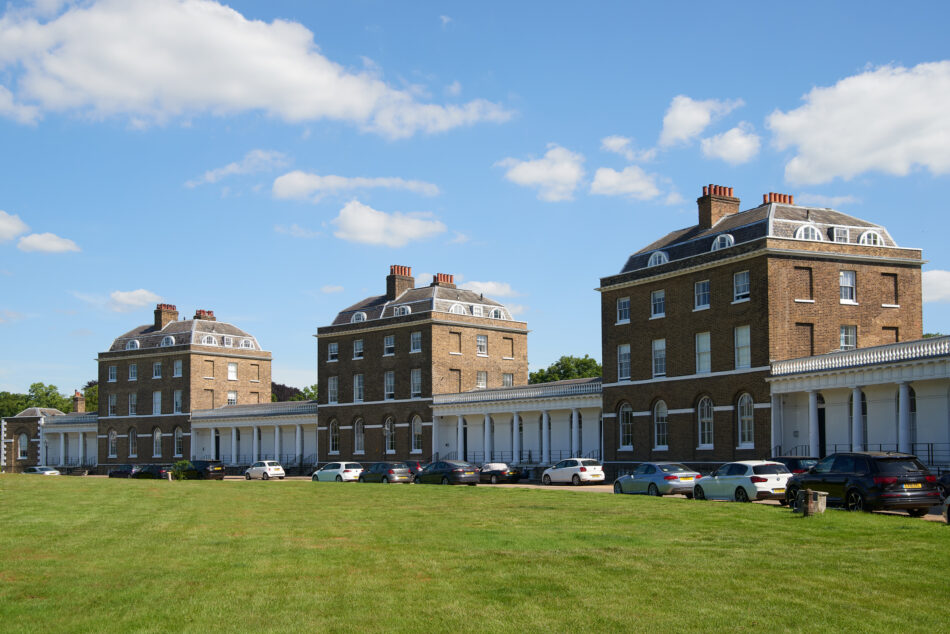 One of the most nationally significant examples of Georgian domestic architecture; a true masterpiece

This beautiful one-bedroom apartment lies on the Grade I-listed Paragon in Blackheath. The crescent is one of the most significant and high-quality examples of Georgian domestic architecture nationally and underwent significant renovations during the 1950s, following damage during the Second World War. This apartment occupies the linking colonnade between the seven main blocks and has tremendous amounts of glazing, plus wonderfully high ceilings. The sense of volume creates a grand, beautifully proportioned home, within minutes of the best of south London.

Construction started on The Paragon in 1794 and continued until January 1806. The project was a partnership between architect Michael Searles, associate and contractor William Dyer and timber merchant and landowner John Cator, who bought the 300-acre Wricklemarsh Estate in the 1780s with a view to developing the land. The Paragon was the first of these developments and now forms the northern boundary of the Cator Estate, a 282-acre complex of private roads and exceptionally high-quality architecture from the Georgian period through to contemporary developments.

The original 19th-century purchasers of the 14 semi-detached houses on The Paragon enjoyed the use of nine acres of land. This provided a small amount of parkland and pleasure ground, along with kitchen gardens, fish ponds and pasture for dairy cows. As London expanded and Blackheath became an inner-city suburb, the houses changed hands and uses, with one becoming a school and another a hotel. During this time, much of the purity of design was lost and incongruous additions were made.

The buildings suffered badly from bomb damage during World War II. However, following the war, architect Charles Bernard Brown valiantly made it his cause to restore the buildings. From 1947-58, the whole crescent was restored and converted to the apartments that lie here today. Missing interiors and brickwork were replaced ‘like for like’, using salvage recovered from the great Georgian townhouses of central London that were bombed or demolished after the war.

A front door on the upper ground floor opens to a grand communal hall. The front door to this apartment lies to the left and opens to a generous hallway, from which all the rooms radiate.

The living room lies to the rear of the plan and has an enormous window that overlooks the garden. Indeed, all principal rooms are bathed in sunlight by floor-to-ceiling glazing and have bucolic views of the large communal gardens to the front and rear. Parquet flooring runs underfoot throughout, and neutral decoration allows the quality of the architecture to truly sing.

The contemporary kitchen and bathroom have both been impeccably designed. The kitchen is of a very high specification, with appliances by Siemens, a Corian worksurface and cabinetry by Poggenpohl. The large bedroom shares the same aesthetic sensibility as the rest of the home and has deep wardrobes for storage.

There are extensive communal gardens to both the front and rear of The Paragon. This is a wonderfully verdant space, put to good use with an annual residents summer barbeque.

The Paragon forms the northern boundary to the Cator Estate, which is made up of 282 acres of private roads and features architectural jewels from all ages; from classical villas built at its inception in the late Georgian period to the modernism of Eric Lyons’s Span Housing. Blackheath Village is under a ten-minute walk from The Paragon and is renowned for its community spirit, the plethora of thriving independent shops and eateries and its much-loved weekly farmers’ market. The house is a short walk to Brooklands Primary School, one of the best primary schools in the Borough of Greenwich and OFSTED-rated “outstanding”.

Please note that all areas, measurements and distances given in these particulars are approximate and rounded. The text, photographs and floor plans are for general guidance only. Inigo has not tested any services, appliances or specific fittings — prospective purchasers are advised to inspect the property themselves. All fixtures, fittings and furniture not specifically itemised within these particulars are deemed removable by the vendor.
The Paragon — London SE3
Interested? Let’s talk