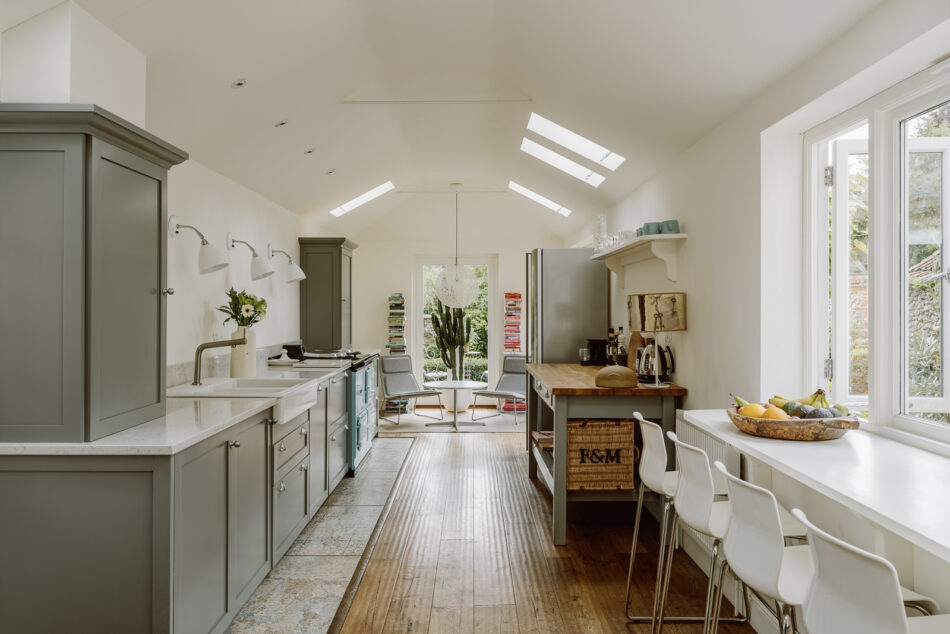 The brick wall has been left exposed, revealing the far older flint and brick gable end of the neighbouring barn

This incredible Georgian Grade-II listed cottage sits on the edge of a pretty green in the village of East Rudham in Norfolk. Extending over 2,000 sq ft, the house has had a long and varied history. Constructed circa 1800, the house has a yellow-washed render, a later bay window, and a steeply pitched pantile roof. Its original features have been lovingly restored by the current owners, who have also created a contemporary and open-plan kitchen to the rear, which opens onto a pretty, private garden.

This house is one of a short terrace of houses which sit alongside a village green, surrounded by rolling fields. Originally two cottages, both extended in 1828, it was then knocked into one larger house in about 1871. In the early 20th century, the house was extended yet again, which today houses the fantastic voluminous kitchen. For more information about the history of the area, please see the History section below.

Entry is through a central doorcase flanked by decorative engaged pilasters and into a hallway. At one side, in the earliest part of the house, is a cosy sitting room warmed by an open fire and with a partly exposed brick wall. The original fireplace surround echoes the decoration around the front door. A large bay window is fitted with a window seat with wonderful views over the green.

On the other side of the hallway is a formal dining room. Again, the brick wall has been left exposed, revealing the far older flint and brick gable end of the neighbouring barn. A lovely fitted and glazed cupboard can be used to store and display crockery and a window is bookended by its original shutters.

A cosy snug area and boot room separates the older part of the house from the more contemporary extension. A woodburning stove creates a focal point and warms the room and the kitchen beyond in colder months. Oiled engineered-oak floorboards run the length of the kitchen, which is composed of grey cabinetry set against granite worktops. The room is complete with a light blue electric Aga. At the end of the room, a pair of French doors open into the garden. There is also a shower room on this floor.

Upstairs, on the first floor, are three generous double bedrooms, which share a large family bathroom. Here, the bath has far-reaching views over the garden and fields beyond. Two of the bedrooms have their own fireplaces, and hardwearing coir carpet has been installed throughout this floor.

The top floor is home to a further two double bedrooms, with exposed grey-painted beams. One bedroom has particularly high ceilings.

A lovely south-facing garden sits behind the house, enclosed by brick and flint walls, and wonderfully private as a result. Laid to lawn in the middle, it has beautifully planted borders with banana trees, a fig tree, box balls, hydrangea Annabelle with its lovely froth of white flowers, perfumed lavender, dahlias and an olive tree, to name a few. On one of the external walls of the kitchen is a grape vine with delicious edible grapes.

East Rudham is a pretty village located close to both the useful transport links of Kings Lynn, as well as Norfolk’s beautiful coastline. The village itself has a popular pub The Crown Inn, which serves good food, as well as a café, village shop and primary school.

The bucolic seaside towns of Wells, Brancaster, Burnham Market, Holkham and Burnham Overy Staithe are all under 25 minutes from the house by car. There are many fantastic restaurants locally; Sculthorpe Mill, only seven minutes from the house, was recently voted the best hotel and restaurant in the East of England by the Sunday Times. There is also the Dabbling Duck in Great Massingham, Congham Hall, Morston Hall and various more in nearby Burnham Market. There is also an abundant Farmers Market in Fakenham every Thursday, as well as at Creake Abbey the first Saturday of the month, alongside a brilliant deli.

Houghton Hall, whose hall, spectacular gardens and exhibitions of art are open to the public, is less than eight minutes away from East Rudham.

There are good state schools in both Kings Lynn and Fakenham – including Fakenham Junior School and Fakenham Academy – whilst private schools include Greshams in Holt, Glebe House in Hunstanton and Beeston Hall near Sheringham.

Trains run from nearby Kings Lynn station directly to Kings Cross station in circa an hour and 50 minutes, via Cambridge which is approximately 50 minutes from Kings Lynn.

In 1891, the front room, now the dining room, was rented to Messrs Gurney Birckbeck Barcley and Buxton, for use as an agency for the King’s Lynn Barclays branch bank, where it remained for years. In 1939 the bank was shut, and the room was used instead by Norfolk County Council as a wardens’ post. It then reopened again in 1943 until it finally closed in 1973. The neighbour’s house was used for a short time in the late 19th century as a school, and then as a butcher, before that shut shop in 1964.

East Rudham’s name derives from Old English, meaning ‘Farm of a man named Rudda’. In terms of its early history, there is evidence that the sites of the villages would have seen some activity from the Iron Age onwards; two Iron Age coins have been found in East Rudham, one of which was made of gold.

While there isn’t much evidence of an Iron Age settlement, there is of a Roman. There is a possible Roman road and seemingly the remains of a Roman building (a large amount of brick, tile and window glass have been found), alongside other Roman coins, pottery and brooches.