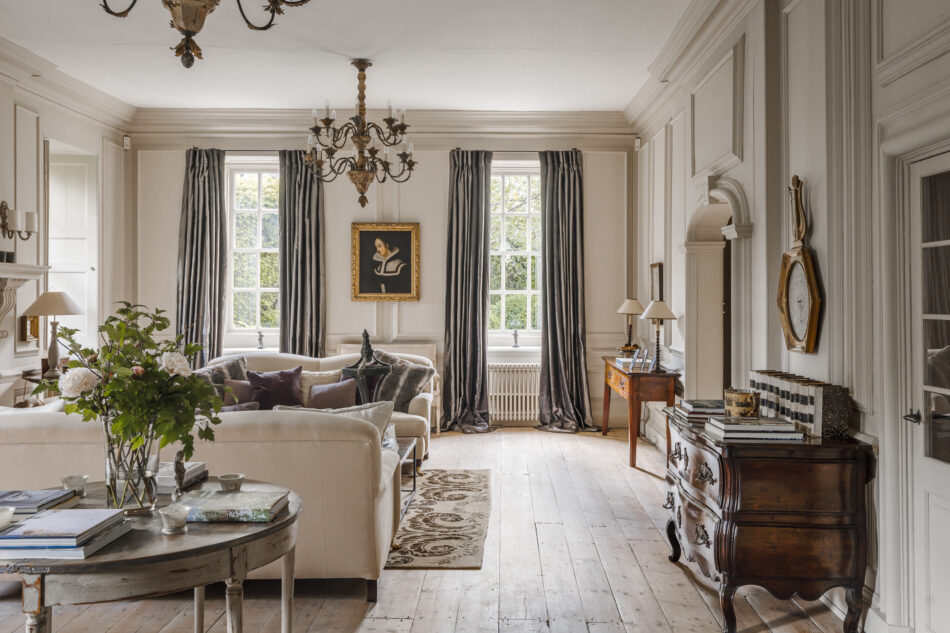 An exceptional Grade II*-listed medieval manor house, extensively remodelled during the 18th century by John Wood the Younger, a principal architect of Bath

This spectacular and historically significant Grade II*-listed manor house exceeds 5,870 sq ft and has six bedrooms. Originally constructed as a hall house, the core of the building was built in the 12th century. It was comprehensively remodelled and rebuilt during the 18th century by John Wood the Younger, a principal architect and town planner of Bath, who leased the house for a time. Wood’s interventions are typical of his architectural vision, combining Palladianism with a distinctly British sensibility. The house has undergone an extensive and highly sensitive programme of restoration works in recent years and is now exceptionally well presented. Set in three acres of land, the Grade I-listed St Mary’s Bitton lies to the rear of the grounds, and a sweeping vista with an avenue of trees lies to the front.

Sheltered from view, the house is approached from the left via a private drive leading to a forecourt with space for several cars. The handsome façade displays its history in stone, combining gothic, local vernacular and Palladian elements.

The house is seven bays across; the medieval core consists of three bays made from Bath limestone rubble with a central buttress. It is adjoined on the right by a gabled, two-bay wing with blind Romanesque arches. A two-bay classical, ashlar wing is on the left, which is pure Palladian classicism and represents Woods’s wider work. The house is topped with a slate roof. For more information, please see the History section below.

Entry is to a large dual-aspect hall extending the depth of the building. A deep classical stucco arch, likely in place of the original rear wall, divides the hall, separating the entertaining and domestic spaces; antique barr grey limestone flags run underfoot.

On the right of the hallway is the reception room, which overlooks formal gardens and extends the full depth of the house. Originally two rooms, it was reconfigured by Wood to create the magnificent space seen today. Four large 12-pane sash windows flood the space with light, and there is direct access to gardens through French doors; original hardwood floorboards run underfoot. Wood also added fine plasterwork and panelling, creating a truly resplendent interior.

The dining room on the left of the hallway is more restrained. Here, walls are painted ‘Watttle’ by Paint Library and are crowned by bolection coving; an 18th-century French limestone foliated fireplace acts as a focal point and adds symmetry to the room. The kitchen is large and square in plan. Wooden panelling topped with dentils lines the walls, and the floor is herringbone parquet. A six-door Aga is set in a pedimented alcove. On the left, behind a medieval doorway, is a walk-in pantry.

A voluminous passage runs behind the dining room and links the main hall with the kitchen. Beyond the passage is the garden room. This is a beautiful space with a pitched roof and exposed beams. A bath-stone double Belfast sink makes the space perfect for arranging flowers.

Bedrooms are set across the first and second floors, all arranged on a thoughtful and spacious plan. On the first floor are the four principal bedrooms, two of which are en suite, and a WC. The rooms all have exceptionally high ceilings. The two further bedrooms at the top of the house are limewashed and have original beams. These share a large spacious bathroom. All bedrooms have south-facing views of the avenue and open fields beyond.

The seamless blending of old and new in The Grange is exemplified in the bathrooms, where modern interventions have been added, yet rooms retain the original character. Bath stone chimneypieces contrast with contemporary hardware and roll-top baths. All bathrooms on the first floor have underfloor heating.

The gardens have been designed by Arne Maynard. Maynard’s practice is to create a garden with ‘a sense of place’, his work here seamlessly envelops the house creating wonderful vistas from every window in the house. Its stylistic variation creates the impression of building on historic landscaping with more contemporary interventions such as the dining area.

Finely manicured elements and are interspliced with more naturalistic planting. Doors open from the garden room to a large outdoor dining area, bounded by a cantilevered bench running around the perimeter. Here, topiary hedging is combined with plantings of Corsican mint, creating a wonderful scent, climbing and rambling roses along with a clematis run along the garden walls.

Tudor-inspired topiary next to the dining space is ordered and formal, in contrast to the raised flowerbeds with alliums, foxgloves, lavender, and shasta daisies.

A stone built garden pavilion lies at the edge of the gardens, fronted with a bank of medlar trees.

At the front of the house an espaliered quince grows between the windows underplanted by box hedging. A flagstone path, accompanied by further planting, leads to a large lawn with an avenue of lime trees. These frame a vista beyond the ha-ha to a two acre field which is bordered by the ancient River Boyd.

The village of Bitton has a strong community atmosphere with a local shop, pub and a primary school. Conveniently located between Bath and Bristol, the centre of Bath is a 15-minute drive; the heart of Bristol is 20 minutes. The house is also well served by restaurants and country gastropubs, The Pig near Bath, is a 20 minutes drive, whilst The Swan Inn is in neighbouring Swineford along with The Old Crown in nearby Kelston .

Bristol has a rapidly growing independent food scene with a diverse selection of restaurants in the centre and various neighbourhoods. Clifton Village has an excellent selection of independent cafes and restaurants, including Tradewind Espresso, Spicer + Cole and Pasta Loco on nearby Cotham Hill. The Michelin-starred Casamia and sister restaurant Paco Tapas, both founded by the Sánchez-Iglesias brothers, are notable highlights, as well as Wilsons in Redland. Little French in Westbury on Trym is also very well regarded.

Cultural activities and annual festivals are two-a-penny in Bristol;  Arnolfini and Spike Island lead a well-regarded annual programme of contemporary exhibitions and performances. The Watershed, a much-loved institution located along the harbourside, hosts talks and events alongside a programme of independent film screenings.

Bath Spa train station is a 15-minute drive with frequent trains to London in one hour 25 minutes.

A listed building since 1953, The Grange at Bitton has endured many internal and external architectural changes since the clergy occupied the original 12th-century site. The structure, including a Norman inner building c1250, was converted into a hall and house in the Middle Ages. Parts were remodelled or rebuilt in Tudor times and again during the 17th and 18th centuries.

In the mid-1700s, it was comprehensively remodelled by John Wood the Younger, the British architect whose work at Bath represents the culmination of the Palladian tradition initiated by his father, John Wood the Elder. Bath is one of the most celebrated achievements in comprehensive town design. While he rented the house, Wood added a new wing of limestone and slate, and two of the ground floor rooms were panelled and converted to one living space.

A plaster panel depicting part of the Seymour family crest was found above one door, evidence of a family with a troubled history at the Grange from the Reformation until 1770. According to Ellacombe’s ‘The History of the Parish of Bitton’, Sir John Seymour of Frampton Cotterell became possessor of the Parsonage and estate of Bitton c1568. The beginning of a long Seymour – Bitton connection.

It is likely the manor was bequeathed to the family by the crown following the premature death of Jane Seymour. Seymour was Henry VIII’s third wife, great love, and only wife of the king to be given a Queen’s funeral and buried alongside him at Windsor.