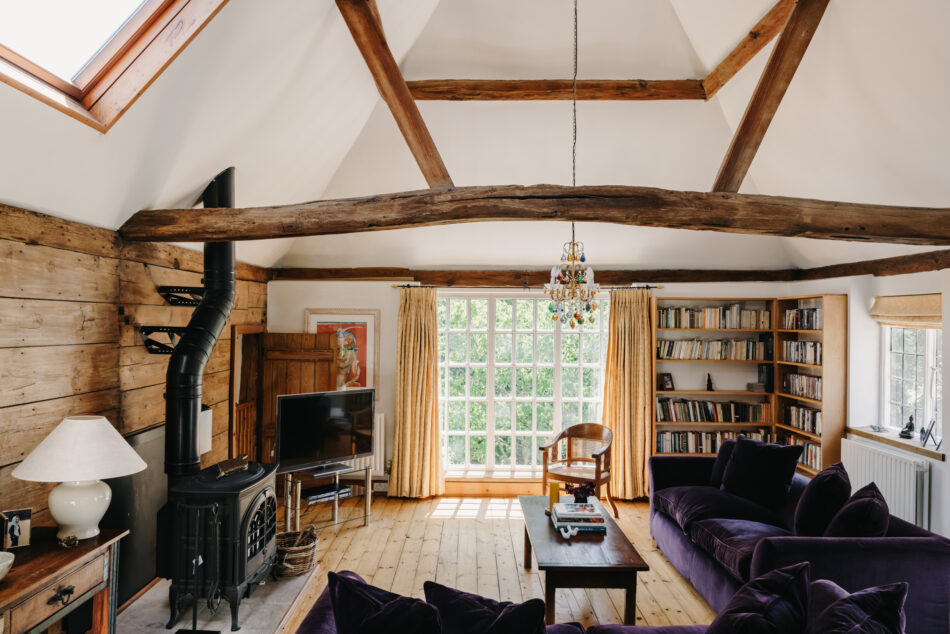 A bridge leads over the millrace to an island planted with mature native trees, weeping willow and wild flowers

This wonderful Grade II-listed converted coach house lies in a bucolic position on the banks of the River Oughton, adjacent to the beautiful Oughtonhead Nature Reserve. Extending to almost 2,500 sq ft, the house contains five bedrooms as well as an expansive kitchen and dining room with soaring pitched ceilings, and a first floor living space with leafy views over the nature reserve. The River Oughton, a beautiful chalk stream, runs along the boundary and the mill race runs through the garden.

On the outskirts of the village of Ickleford, The Coach House is one of five buildings off Westmill Lane, which has been the site of a mill since the 11th century and was a working mill until the early 20th century. The mill burned down in the 1950s and there is now a small rose garden where it used to be. The cluster of five homes that were positioned around the mill includes a farmhouse, a cottage, two barns and this coach house; they were all restored at the same time, around 20 years ago. The restoration was thoughtful, preserving the integrity and feel of the old building and celebrating its original features, such as the high vaulted ceilings with exposed beams in the living spaces. There are a multitude of windows and skylights that allow light to pour into every room of the house.

A gravelled road leads to the house, and its two designated parking areas. A pair of floor-to-ceiling glazed doors are found behind wooden coach house doors, which all open into a wide, light-filled hallway. Steps lead down to the large, voluminous living spaces; to the right is the bright, open-plan kitchen and dining room, with wonderfully tall ceilings and windows that overlook the garden. The kitchen is composed of white-painted, Shaker-style cabinetry with granite worktops, set against slate-tiled floors. Just outside the kitchen is a separate utility room, fitted with similar cabinetry; this also provides access to one of the parking areas to the side of the house. There are three bedrooms, one of which is currently used as a study, as well as a family bathroom on this floor.

A staircase leads to the first floor and a beautiful living space, where wooden floorboards run underfoot and a warming wood-burning stove grounds the room. The original beams have been left exposed and there are wonderfully high ceilings; a large picture window floods the room with light. The main bedroom is on this floor, with an en suite bathroom and a balcony framed by ornate, romantic wrought-iron railings. A spiral staircase leads to a further bedroom/study.

The back door opens onto a York stone terrace with a rose and sweet-scented jasmine-covered arbour. The garden, which extends to half an acre, has been organically cultivated during the 15 years the current owners have lived here, with a myriad of flower beds and fruit trees, including espaliered plum, cherry and peach trees, plus a small orchard area of apple, pear and quince, and a vegetable patch.

A winding brick path leads through the garden, along the flower beds and to the vegetable patch at the end. Steps descend to a seating area, which has a lovely view over the river. A bridge leads over the millrace to an island planted with mature native tress, weeping willow and wildflowers; a deliberately wilder part of the garden. The island is bordered by the river on one side and the mill race on the other.

Long-horned cattle graze in the neighbouring nature reserve, and it’s possible to sometimes catch sight of the local kingfisher or hear a cuckoo. There are lovely walks in all directions; following the River Oughton through the Nature Reserve or along footpaths through open countryside. Several of these footpaths follow the lines of the ancient chalk path, the Icknield Way, which crosses the country from Dorset to Suffolk. The village of Ickleford takes its name from this path.

The Coach House feels wonderfully rural yet is positioned close to the centre of Hitchin. Hitchin is a pretty market town, complete with a beautiful church, in a particularly lovely setting by the river. The old streets are lined with plenty of shops (including a Waitrose), cafes and restaurants. Cambridge, which is a short train or car ride from the house, is famous for its university and college buildings and is home to numerous pubs, shops, parks, a weekly market and the River Cam – perfect for a weekend jaunt.

Equidistant between London and Cambridge, the house is close to excellent transport links. The train from Hitchin takes 30 minutes to King’s Cross St Pancras; there are also frequent trains to the City (including to Farringdon and London Bridge), and onwards to Gatwick and Brighton. There are also easy links to the A600, A1 and the M1.

Please note that all areas, measurements and distances given in these particulars are approximate and rounded. The text, photographs and floor plans are for general guidance only. Inigo has not tested any services, appliances or specific fittings — prospective purchasers are advised to inspect the property themselves. All fixtures, fittings and furniture not specifically itemised within these particulars are deemed removable by the vendor.
The Coach House — Hitchin, Hertfordshire
Interested? Let’s talk