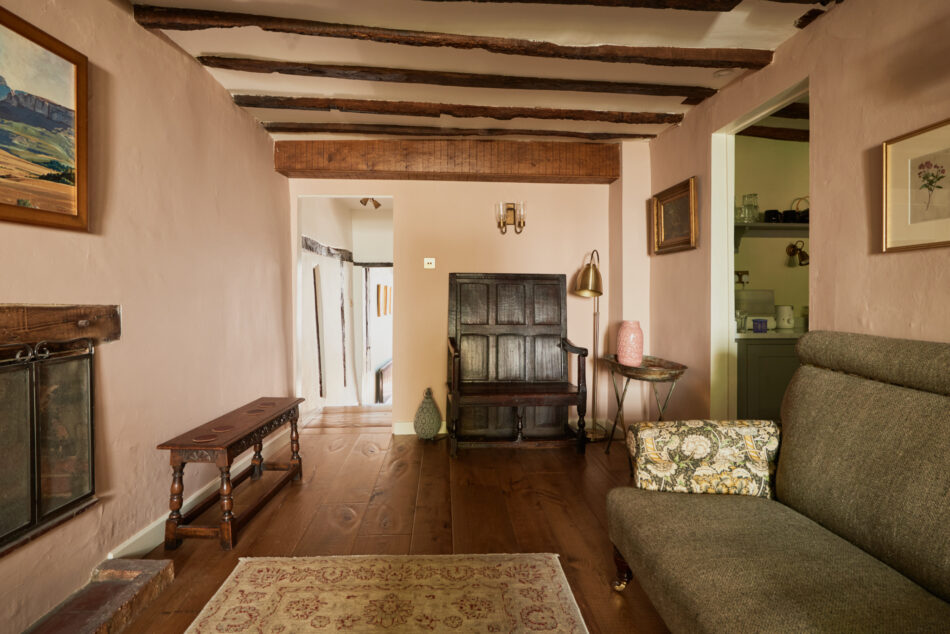 Exposed oak beams overhead characterise the living room, hinting at the sense of history that permeates the entire house

This beautiful Grade II-listed home lies upon Temple Street, within the scenic village of Brill in West Buckinghamshire and close to the Oxfordshire borders. Originally built in the mid-16th century, with later alterations, the house has a rich history and has served multiple uses. It has been carefully renovated in recent years, retaining key historic architectural features that characterise the interior, while allowing for modern convenience with contemporary, yet respectful, interventions. Today, the house unfolds over two characterful levels that extend over 1,100 sq ft and contain three bedrooms. It has a private courtyard garden and a separate detached garage.

The village of Brill is, according to Pevsner’s seminal guide, “magnificently placed on its hill with far views in all directions. The layout of the village is happy too”. It has a history dating back to at least the 11th century; Edward the Confessor, one of the last Anglo Saxon kings, kept a house here, which he likely used when hunting in the nearby Royal Bernwood Forest. Successive kings retained the extensive house until Brill ceased to be a royal manor in the early 14th century. It was later destroyed during the English civil war in 1643.

Built upon a heavy oak timber frame – much of which is still beautifully exposed inside – this house was refaced in the 1750s, using vitreous brick with red dressings. The glass-paned shopfront was added in the late 19th century, when the building became the local hardware store for a time, and has remained in place ever since. Wooden box sash windows act as fenestration for the remaining apertures. Cast-iron radiators feature throughout, and a wonderful, hipped clay tile roof crowns the house in a nod to the area’s rich history as a clay manufacturer. Indeed, Brill’s commercial history as a centre of clay-based industries lasted until the early 20th century; today’s dramatic pitted landscape is a direct result of this. Many pottery kilns dating from the 14th century onwards have been excavated in the village.

The entrance opens immediately to the hallway and dining room, a wonderfully versatile, light space, care of the Victorian glass-paned shopfront. Quarry tiles run underfoot, while exposed oak beams overhead characterise the room and hint at the architectural style and sense of history that permeates the entire house; indeed, glimpses of this timber frame add texture to nearly all the rooms. A box staircase carpeted in seagrass rises from the rear of this room and a convenient cloakroom is positioned to the right.

A passageway leads to the living room and kitchen at the rear of the plan, passing by the entryway with a generous cellar underneath. The living room has stained oak flooring, exposed beams and a working fire at its centre. The deVOL kitchen contains wooden cupboards and open shelves, painted in deVOL’s signature ‘lead colour’, with Carrara marble atop the work surfaces. A butler sink is positioned by the pretty sash window and a barn door opens to the courtyard garden, with a separate exterior utility area conveniently to one side. Clay floor tiles feature again here, acting as bookends to the entrance hall and dining room.

The upper floor contains three bedrooms, with the main bedroom to the front of the plan featuring a beautiful original elm floor and wonderful exposed timber detailing revealed within the walls. Seagrass runs underfoot through the hallway and to the two bedrooms at the rear of the plan, while a generous shower room is positioned centrally. The glass shower enclosure has a skylight set into the roof that floods the room with light from above, illuminating the Perrin & Rowe brassware that has been coupled with hand-glazed metro tiles by Fired Earth.

The private, west-facing courtyard garden is something of a suntrap, enjoying direct sunshine from early afternoon through to early evening. Paved with York stone, it is the perfect spot to enjoy lunch or drinks alfresco in the warmer months. Lavender has been carefully planted and there is a mature, fragrant climbing jasmine plant.

To the rear of the garden is side entry to a detached garage-cum-storeroom, with an undemised parking space outside. Further plentiful unmetered on-street parking can be found directly on Temple Street, to the front of the house.

Brill has two village stores, a post office, a sports and social club with cricket and sports pitches and an excellent butcher. Two exceptional local pubs, The Pointer and The Pheasant, are close to Temple Street and serve excellent food; the latter was a favoured drinking spot of the late author Roald Dahl, a noted Buckinghamshire resident. Further amenities, including branches of Waitrose, can be found in the nearby towns of Thame, Bicester, Aylesbury and Oxford.

There are countless scenic walking routes easily accessible from the house. The famed, Grade II*-listed Brill Windmill is something of a local landmark and one of the earliest and best-preserved examples of a post mill, with timbers dating back to 1685. Buckinghamshire benefits from excellent grammar schools, while Oxford has a number of outstanding independent schools, including the Dragon School, Oxford High School, Headington Girls School, Magdalen College School and others.

Brill is very well connected to both Oxford (a 25-minute drive away) and London (35 minutes by train to Marylebone from Haddenham or Thame Parkway). Additionally, the M40 is only three miles away by car.

Please note that all areas, measurements and distances given in these particulars are approximate and rounded. The text, photographs and floor plans are for general guidance only. Inigo has not tested any services, appliances or specific fittings — prospective purchasers are advised to inspect the property themselves. All fixtures, fittings and furniture not specifically itemised within these particulars are deemed removable by the vendor.
Temple Street — Brill, Buckinghamshire
Interested? Let’s talk