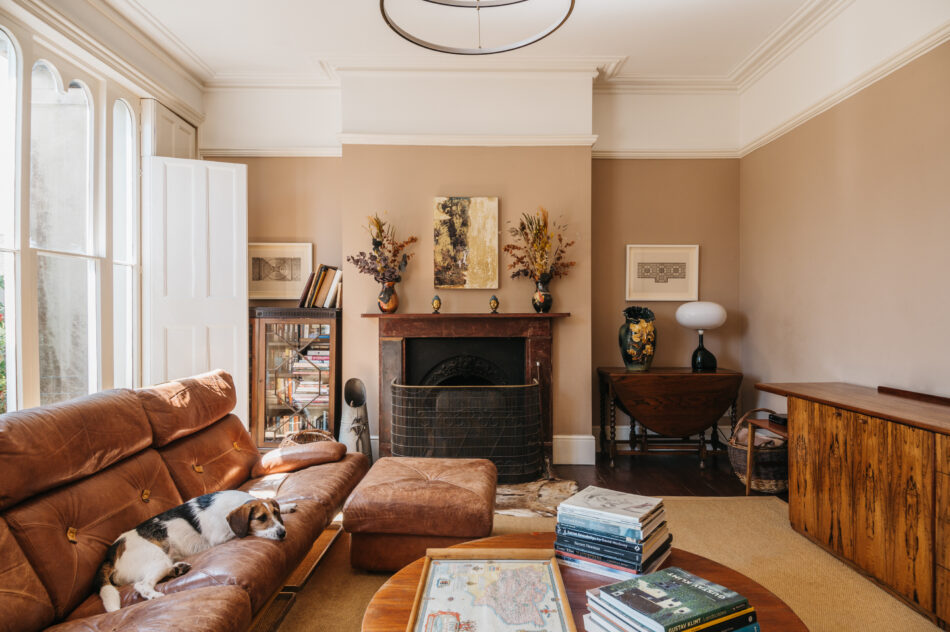 It is rumoured that author Reverend Thomas Stanley Treanor had a tower on the roof, from where he looked out to sea

This fantastic, seven-bedroom Victorian house in Deal, Kent was built circa 1856 and extends over 4,100 sq ft internally. It has undergone a sympathetic and stylish renovation by the current owners, an artist-turned-builder and a fashion designer. Their shared love of colour, historic buildings and scouring reclamation yards has resulted in a brilliantly colourful home that celebrates contemporary living while preserving the house’s many original Victorian features. Complete with a separate two-bedroom annexe, which could be rented out, a Shepherd’s Hut, which could be used as an office, and a Coach House, which currently serves as a games room, the house is remarkably flexible. It also enjoys back and front gardens and an incredible roof terrace.

The house was once owned by Reverend Thomas Stanley Treanor, a Chaplain to the Missions for Seamen for Deal and the Downs and Founder of the Boatman’s Reading Rooms in Deal. Treanor wrote three books recording his missionary work and chronicling the dramatic escapades of the Deal boatmen. Copies of his books, ‘Heroes of the Goodwin Sands’, ‘The Log of a Sky Pilot’ and ‘The Cry from the Sea’, can be found in the house.

It is rumoured that he had a tower on the roof (where the lantern stands today), where he is said to have looked out to sea and logged the ships stranded on the Goodwin Sands.

In the family room is an illustration of a game of cricket on the Goodwin Sands – which is still played there today – as well as photos of croquet on the lawn and a coach and horse pulling out of the neighbouring house, which was owned in the Victorian times by a doctor.

A metal, electric gate opens onto a drive with space for parking for multiple cars. The entrance is up steps, to a raised-ground floor, through a glazed, reclaimed door and into a wide hallway. Here, the original wooden floorboards, which extend throughout the house, have been stained and varnished a smart checkerboard.

Immediately to the left, through a reclaimed door inscribed ‘Lower Hall’, lies the formal sitting room. Two large, ornate, original windows, framed by their shutters, bathe the room in light. A family room sits on the opposite side of the hallway, behind glazed double doors. Almost identical in size, the room is lit by a tall box bay window. In both rooms, an original fireplace provides a focal point on the south-western wall.

At the rear to the right of the house, past a useful boot room and separate utility room, lies an open-plan kitchen and dining room. This room is painted a sunny ‘Babouche’ by Farrow & Ball, while cabinetry in the kitchen is painted their slightly darker ‘India Yellow’ and is set against a Carrera marble splashback and worktops. Opposite is an original fireplace, inlaid with beautiful Delft tiles.

A sweeping staircase, crowned by a roof lantern, ascends to the first floor, home to two generous bedrooms. The principal bedroom is complete with a generous en suite bathroom with a separate shower, which in turn opens onto the roof terrace which receives the morning sun. On the other side is another double bedroom, complete with a luxurious freestanding bath, and its own bathroom positioned off the landing.

The second floor is composed of three more bedrooms, one of which has a walk-in wardrobe. All three share a large family bathroom.

The separate annexe is found at the bottom of the house. This is a fantastic space with a contemporary kitchen set against a porcelain-tiled floor and glazed doors, which open onto its own sunken terrace, clad with Iroko wood. A pretty wood-burning stove sits to one side of the sitting room, and there are two double bedrooms, one with a walk-in wardrobe, a bathroom and a guest WC. The whole apartment is underfloor heated. This space has many potential uses, from a holiday let to a granny annexe – the current owners use it as a fashion studio, cinema room and gym.

Further outbuildings make up the aforementioned Coach House, which is now a fantastic games room. The room is full of character with a herringbone parquet floor and a wood-burning stove. The zinc-roofed, cedar-clad Shepherd’s Hut could become a fantastic office, whilst the Apple Store – which once would have been used to store apples since orchards originally surrounded the house – makes for useful storage space.

The outbuildings are arranged around a fantastic garden, mostly laid to lawn, framed by beautifully planted borders and an array of mature trees. The owners have planted over fifty large shrubs and trees, making the garden a private and verdant oasis. There is a paved area, perfect for barbequing, and so much choice when it comes to outdoor eating.

The house is a short walk away from both the station and the coast. Deal Castle Beach and the famed Deal Pier, the last fully intact leisure pier remaining in Kent, are incredibly popular with the local community. The Rose Hotel is known for its excellent bar and restaurant, as is the Frog & Scot. Real Deal Roasters is a renowned coffee supplier and shop, Arno & Co are the preferred grocers, and the Merchant of Relish, is the favoured deli. The Black Pig butchers and Jenkins & Sons fishmongers are also both noteworthy. There is also a fantastic Saturday farmers’ market selling local produce.

The High Street has many other independent antique, clothes, and homewares stores. Of particular note is the ever-popular vintage and mid-century homeware emporium, Mileage. Other local attractions include the famed Deal Castle, nearby Walmer Castle, and slightly further afield, Sandwich Bay and St Margaret’s Bay.

Sandwich, Dover and Canterbury are all easily accessed by car via the A2 and A258. High-speed trains run from Deal to London St Pancras with a total journey time of 84 minutes, with alternative direct trains to London Charing Cross and London Bridge. Access to the continent is also excellent via the Port of Dover, the Channel Tunnel at Folkestone and Eurostar from Ashford International.

Please note that all areas, measurements and distances given in these particulars are approximate and rounded. The text, photographs and floor plans are for general guidance only. Inigo has not tested any services, appliances or specific fittings — prospective purchasers are advised to inspect the property themselves. All fixtures, fittings and furniture not specifically itemised within these particulars are deemed removable by the vendor.
St Leonard's Road — Deal, Kent
Interested? Let’s talk