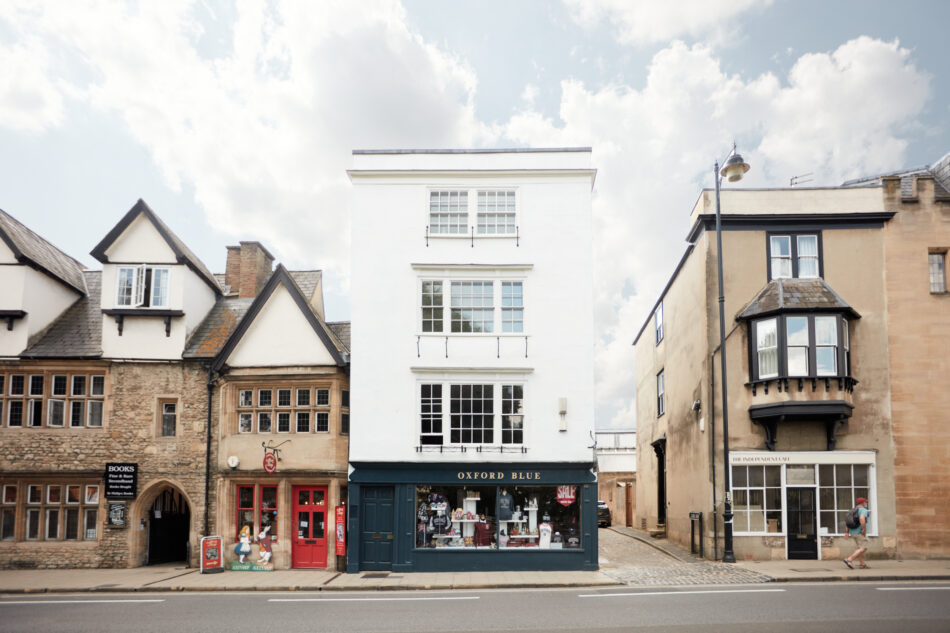 The house has the feeling of being gloriously rural despite its central Oxford location; each floor has views over the striking Christ Church college and its bucolic meadow

This incredible Grade II-listed townhouse is arranged over four floors, including a shop on the ground floor. It extends over 2,000 sq ft and sits in a wonderful position in Oxford on the edge of Christ Church college and its magnificent gardens. With late medieval origins, the timber-framed, stone building was expanded and redesigned in the early 18th century, then restored in 2007 by the current owners in collaboration with renowned conservation architect Julian Harrap.

St Aldates has had many lives since it was built in the 16th century. The house was requisitioned during the Civil War, when it became home to the Royal court’s entourage. But the most notable transformation took place in the early 18th century, when the existing house was remodelled and an external passage that once ran alongside the house was incorporated into the living space. The Georgian building remains intact and preserves many of the original features including original oak panelling, a moulded cornice parapet and a Welsh slate roof.

Later in life, in the mid-1950s, the legendary restaurant Elizabeth opened in the house; a unique dining club that hosted many of Oxford’s grandees and famous visitors.

In 2007, Julian Harrap oversaw the restoration of St Aldates. It received an Oxford Preservation Trust Award in 2008 in recognition of the quality and merit of his intervention. The comprehensive renovation includes work behind the scenes, such as complete re-plumbing, re-wiring, triple-glazing and the adding of additional insulation, as well as the installation of a new kitchen and two bath/shower rooms, and the renewal of the historic roof.

A shop now sits on the ground floor. It has its own separate entrance and is currently let as an Oxford varsity shop. Vacant possession can be obtained at one month’s notice if required.

Entry to the house is at the front, opening into a hallway with black and white mosaic tiles and plenty of space for hanging coats. Parquet flooring leads to the rear, past the original 15th century lime-washed stone wall and to the wooden staircase which winds its way up the four floors. The rooms throughout the house are elegant and spacious, with large windows and a fantastic quality of natural light.

The dining room is at the front on the first floor, illuminated by an expansive window that frames views over Christ Church and its wonderful meadows. The room has particularly remarkable 17th century bog oak panelling. The centrepiece is the fireplace, with an original marble surround crowned by an ornate, carved overmantel. Next to the dining room is a Bulthaup kitchen, with white cabinetry and stainless-steel worktops. Wide oak floorboards run underfoot throughout.

On the second floor is a painted, panelled sitting room, which is wonderfully bright and has the same views over the cathedral. A beautiful fitted bookcase lines one wall. There is a lovely, tranquil atmosphere, with the room set high above the street below. Next door are a shower room and the master bedroom, a beautifully light and calming space overlooking Clarks Row, the picturesque lane which runs to the side of the building.

The historic spiral staircase ascends to the top floor, where there are two further bedrooms; one is panelled, with two windows bathing it in light, and the other has built-in shelves and wardrobes giving the option of a study/dressing room. There is a charming bathroom, with a freestanding  cast-iron bath. Above there is extensive refurbished attic storage and roof access.

The house has a private, south-facing walled terrace, which is accessed from the first floor. Christ Church meadows opposite are a lovely spot for walking. Frequently grazed by Longhorn cattle, they retain a rural feel despite their urban location. Bordered by the River Isis (the Thames) and the River Cherwell, the meadows have access to beautiful walks along their respective towpaths.

The house on St Aldates is exceptionally well located. It lies in Oxford’s city centre, yet is on a relatively quiet road, which has been largely pedestrianised except for buses and taxis. With Christ Church college and its famous meadow and the Botanic Gardens in front, the views are exceptional. Next door to the house on the south side is the famous ‘Alice’s Shop’, which was the real shop that Alice Liddell – she of ‘Alice in Wonderland’ fame – would visit as a child and features as The Old Sheep Shop in ‘Alice Through the Looking Glass‘ by Lewis Carroll. On the north side is the Bishops Palace (now the University Catholic chaplaincy), Christ Church School, Pembroke College and the Town Hall.

An array of museums, shops, cafes and restaurants are nearby, including four supermarkets and the recently opened Westgate Shopping Centre. At the top of the road is the famous Covered Market, which hosts everything from artisan grocers to independent cafes and boutiques. And in under 10 minutes walk you can reach the Ashmolean Museum, the Sheldonian theatre, Modern Art Oxford, Holywell Music Room, The Bodleian Library or the Science Museum.

In terms of transport, the house is fantastically well connected. There is a bus stop for the X70 service on the street, which serves Heathrow and Gatwick Airports, while Oxford train and bus stations are only 15 minutes by foot with trains running to Paddington Station in under 55 minutes and buses to Marble Arch in 90 minutes. There is also quick access to the M40 motorway and the centre of London.

Please note that all areas, measurements and distances given in these particulars are approximate and rounded. The text, photographs and floor plans are for general guidance only. Inigo has not tested any services, appliances or specific fittings — prospective purchasers are advised to inspect the property themselves. All fixtures, fittings and furniture not specifically itemised within these particulars are deemed removable by the vendor.
St Aldates — Oxford, Oxfordshire
Interested? Let’s talk