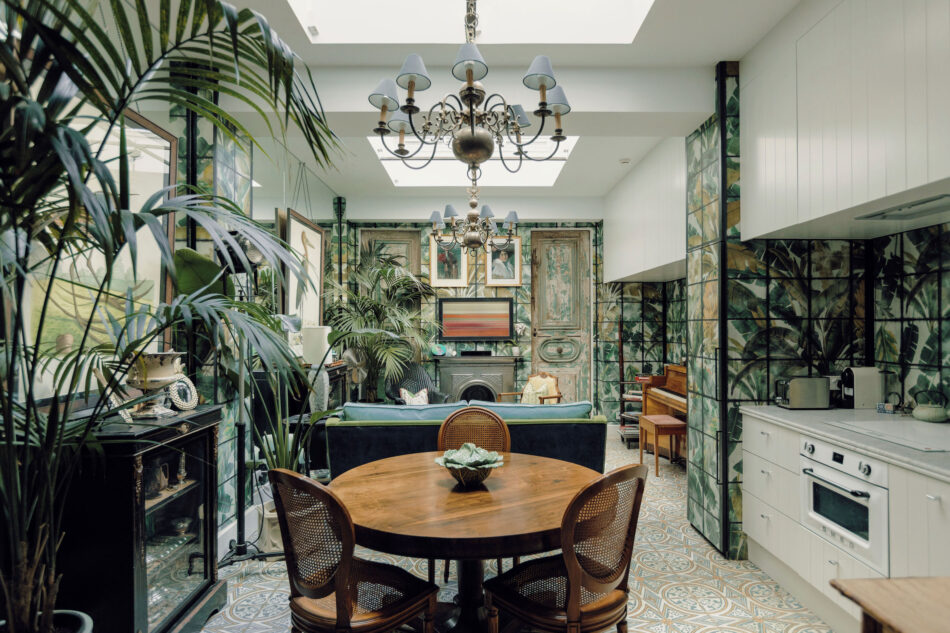 A ‘London Folly’ in the heart of the city, with the atmosphere of a light-filled contemporary Victorian orangery

This entirely unique two-bedroom apartment is situated on the raised ground floor of Russell Court, a noted Art Deco mansion block in the heart of Bloomsbury. It has recently been reimagined by Neil McLachlan Design to create a ‘London Folly’ in the heart of the city, with the atmosphere of a light-filled, contemporary Victorian orangery. Internal accommodation extends to over 650 sq ft and has an incredible sense of volume, height and light, care of the ingenious design. The apartment is discretely located in a private south-facing annexe to the rear of the building, allowing for an exceptional level of peace and calm for such a central location. Russell Court also benefits from secure 24-hour porterage.

Russell Court was constructed in 1937 to designs by George Val Myer, architect of the BBC Broadcasting House, for the then-princely sum of £250,000. It is considered by many to be one of the best examples of the Art Deco architectural movement in London during the inter-war years. Art Deco was a rejection of the Art Nouveau movement and reflected the increasing influence of modernity, mirrored in the building’s decidedly futuristic style and its focus on geometric and linear contours. The main entrance lies on Coram Street, named after Thomas Coram, the 18th-century philanthropist who created the nearby foundling hospital (now a beautiful park and museum).

The apartment is positioned to the rear of the building, at its southern range; it originally had a light industrial purpose as the on-site caretaker’s workshop. Latterly the space was converted into a photographic artist’s studio, thanks to its excellent ceiling height and depth of space. At this point three large, pitched roof lanterns were inserted into the roof, to create the space which now serves as a beautiful and distinctive home.

Entrance to the apartment is through a private front door with a porthole window. This opens immediately to the open-plan living room, a wonderfully enveloping space with walls both papered, in a distinctive palm print by Mind the Gap, and mirrored to create an extended sense of space. Replica 18th-century Portuguese patterned porcelain tiles run underfoot, while heating is provided through subtle heated skirting boards from Discrete Heat. A built-in Sonos speaker system is incorporated into all rooms.

A carefully conceived kitchen lies directly ahead, where a Carrara marble worktop with an elegant double bullnose edge sits atop chalk-white cabinetry. Appliances are concealed both here and in the adjacent walls; similarly ingenious storage solutions feature in all rooms. The seating and dining areas are laid out in an open plan, centred around a reclaimed Victorian chimneypiece, while natural light floods in from above.

Two separate antique French doors allude to further space beyond and lead to the main bedroom. A sense of serenity and the natural world pervades, with a distinctive photographic mural of a New Zealand landscape covering an entire wall: a mist-wreathed lake by photographer Craig Potton. The ceiling is painted in ‘Hague Blue’ by Farrow and Ball, to simulate the night-time sky, with a Japanese paper roof light allowing diffused illumination. Two further walls are covered in Japanese handmade paper from Phillip Jeffries, while the southern wall features unusually deep and plentiful fitted wardrobing with forest floor doors. Boucle sisal carpet runs underfoot and unifies the design.

At the western range of the apartment is a separate study area and the main shower room, featuring Carrara marble as its primary material. A separate, modest wing is home to a wonderfully versatile space currently used as a secondary guest bedroom; however, it could easily be used as a home office. There is an additional en suite shower room on this level.

Some of London’s most important garden squares are within minutes of Russell Court. Laid out in the Regency period by the Duke of Bedford, these include Brunswick Square Gardens, Coram’s Fields, Tavistock Square Gardens, Russell Square and Bedford Square Gardens. All are beautifully maintained and largely surrounded by the finest examples of domestic Regency architecture in central London. For further adventures in nature, Regents Park is a five-minute cycle away and includes some 400 acres of incredibly diverse natural landscape.

Russell Court is exceptionally well-positioned in the heart of Bloomsbury. Immediate local amenities include the excellent Brunswick Centre, with its large branch of Waitrose, a Curzon cinema, several restaurants, and a branch of The Gym. Nearby Marchmont Street has excellent shops, pubs, and restaurants, while Lambs Conduit Street is home to a diverse community of independent retailers set along a pedestrianised thoroughfare. The West End offers further opportunities for dining and retail exploration. Bloomsbury itself is steeped in academia, and as such the apartment is well located for access to UCL, SOAS, RADA and all the academic institutions therein.

Transport links are outstanding. Russell Court is located minutes from Russell Square underground station (Piccadilly Line) and is near to King’s Cross St Pancras (for Eurostar services, as well as Hammersmith & City, Circle, Metropolitan, Northern and Victoria lines). Euston & Euston Square (Northern, Metropolitan, Hammersmith, Circle & London Overground Lines) are also minutes away by foot. The Elizabeth Line, opening in 2022, will operate at nearby Tottenham Court Road station, with a journey time of 25 minutes to Heathrow Airport.

Please note that all areas, measurements and distances given in these particulars are approximate and rounded. The text, photographs and floor plans are for general guidance only. Inigo has not tested any services, appliances or specific fittings — prospective purchasers are advised to inspect the property themselves. All fixtures, fittings and furniture not specifically itemised within these particulars are deemed removable by the vendor.
Russell Court — Woburn Place, London WC1
Interested? Let’s talk