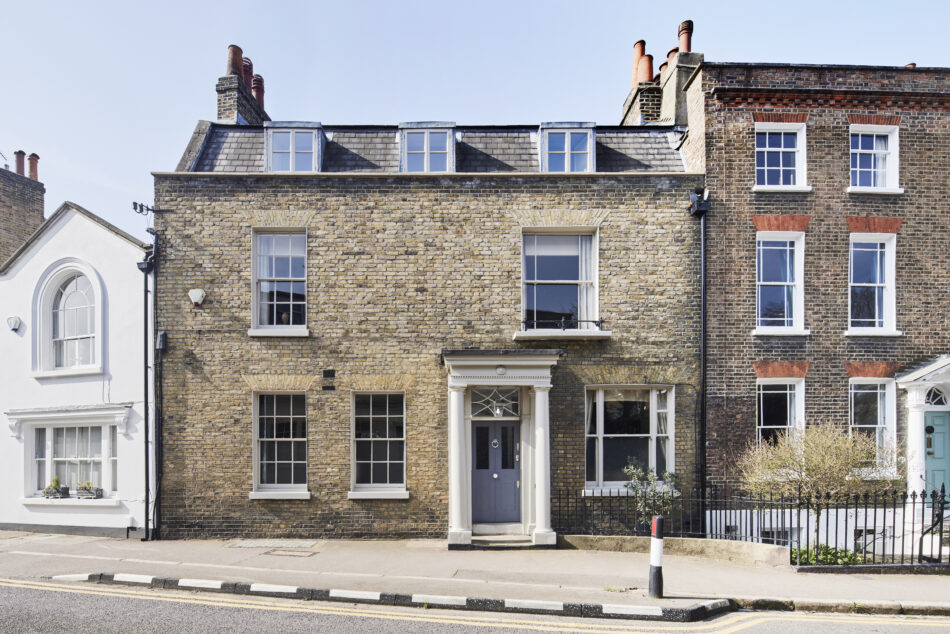 This distinguished double-fronted Georgian house is situated within the West Greenwich Conservation Area, a few minutes’ walk from the centre of Greenwich and its glorious eponymous park. The house is Grade II-listed and was built in the 1770s as part of a terrace of houses along with the highly sought-after Royal Hill, a quiet residential street and community peppered with a charming selection of high-quality food and wine shops and excellent pubs. The main house extends to approximately 3,400 sq ft over four storeys with a private south-west facing garden and gated off-street parking for two cars. Within the curtilage is a fabulous separate annexe, Cutting House, a recently built one-bedroom house designed by E2 Architects, with almost 500 sq ft of further accommodation arranged around a central courtyard garden.

The house can be accessed via the formal entrance at the front or from a rear driveway on Circus Street, which leads to gated off-street parking at the rear. The formal entrance is positioned just off-centre through a Prostyle Doric-pillared porch and frieze with guttae and a central decorative rosette. Beneath an intricate leaded transom, the front door opens to a vestibule and a generous entrance hall which turns in an L-shape to the central staircase. To the left, behind the two Georgian ground-floor windows of the front façade, is a reception, currently used as a study.

The kitchen is situated at the end of the hallway’s wide turn, arranged around a kitchen island, with an electric Aga and original wideboard pine underfoot. French windows open to the side section of garden, and a staircase offers a natural divide to create an intimate reading space with a recessed log burner. An exposed beam rests above the wood stove, one of a series of original timbers that continue into the boot room and utility. This charming and useful room contains an old cast-iron range, a wall of storage seating beneath windows to the garden, and offers a third route to the garden through glazed double doors.

Situated just around the corner, at the end of the driveway on Circus Street, is  Cutting House, a superb addition to the main house providing separate accommodation. Originally a Victorian railway cutting building, it has been recently rebuilt as a one-bedroom house arranged around an intimate courtyard garden. The design is suggestive of a Hamptons beach house with white-slatted internal cladding throughout and, following the form of the original building, vaulted ceilings now punctuated by a series of illuminating roof lights. Solar panels on the roof feed into the grid. The glazed courtyard doors retract fully to blur the boundary between inside and out during warmer months. The house has been used by the current owners as an overspill for visiting guests and family but could provide a significant income for short-term lets or longer-term rentals.

At the rear of the house lies a large walled garden with access from the dining room, kitchen and boot room. The main section of garden is paved, with a seating area and in-built bench and a large area for parking in resin-bonded gravel.

Please note that all areas, measurements and distances given in these particulars are approximate and rounded. The text, photographs and floor plans are for general guidance only. Inigo has not tested any services, appliances or specific fittings — prospective purchasers are advised to inspect the property themselves. All fixtures, fittings and furniture not specifically itemised within these particulars are deemed removable by the vendor.
Royal Hill and Cutting House — London SE10
Interested? Let’s talk