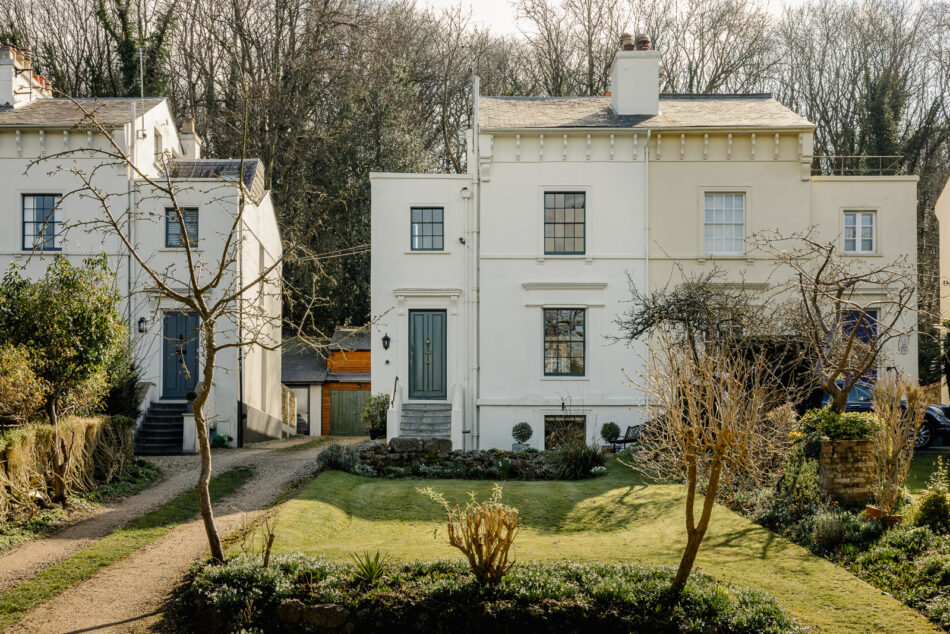 Constructed in the first half of the 19th century, this is a wonderful Grade II-listed five-bedroom house. Retaining many finely appointed Regency details, the house is complemented by sensitive contemporary interventions. The expansive internal living space extends over 2,800 sq ft, with an additional garage and workshop above. Elegant proportions archetypal of the Regency period are found throughout; natural light bathes the house courtesy of large multi-paned sash windows.

The house occupies a generous plot, set far back from a private road with gardens to the front and rear. Located on the edge of Hemel Hempstead, the house backs onto Roughdown and Sheethanger Commons and the rolling hills of the Chilterns, while being just 30 minutes from central London.

Four pairs of semi-detached stucco villas make up the original terrace of Roughdown Villas. Within a five-minute walk of the then newly-built Boxmoor rail Station, later renamed Hemel Hempstead Station. The terrace is a very early example of speculative building to serve commuters a century before the development of ‘Metroland’. An annexe at the rear of the building was believed to have been constructed around the turn of the 20th century as a studio for the society portrait painter and modernist, Charles Sims RA, whose mother owned the house. For more information, please see the History section below.

The house is approached along a quiet private road and set back far along a drive, shared with an adjacent house. Mature planting in the large front garden creates a striking first impression. Steps lead up to the front door, painted a dark green on the upper ground floor. The door is framed by a classical entablature, thought to be original.

Entry leads to a wide hall; to the right is a large double reception, which receives light throughout the day. High sash windows overlook the front and back gardens and a kitchenette, leads to the annexe. Opening onto the garden, the rooms were initially laid-out as a painter’s studio; a self-contained apartment, it has the potential to serve a multitude of purposes. A recently restored garage, incorporating the original stables lies at the rear of the plot and has a workshop on a mezzanine.

Stairs descend to the lower-ground floor and lead to a large dining room at the front of the plan and a kitchen to the rear. The kitchen benefits from a granite worksurface, an Esse range cooker and charming French doors, which open out onto a courtyard. The courtyard has an awning to protect from the summer sun; at the rear, there is a bathroom and a large utility beyond.

The staircase to the first floor is beautifully proportioned and has a wonderful, sculpted mahogany bannister. This opens onto a large landing with a bedroom to the rear and a bathroom to the front. A hall leads to two further bedrooms and a staircase to the second floor. Here, two additional bedrooms benefit from beautiful views.

The house is set back from a quiet, private road surrounded by greenery. The gardens lie on a north-south axis and are uninterrupted to the East and West. The villa’s position means that the house and gardens are bathed in light throughout the day. Mature native planting in both the front and rear gardens contrasts with ferns and other tropical species. The front also provides parking for several cars.

Roughdown Villas Road is a peaceful and leafy residential private road, a ten minute walk from Boxmoor village and a 25 minutes stroll to the centre of Hemel Hempstead, home to an abundance of independent shops, cafes, and restaurants, including local favourite Hive for organic coffee.

Nearby, in Berkhamsted, there are many well regarded restaurants and shops including a Waitrose. The ever-popular Alford Arms is a short distance in the charming village of Frithsden and on the waterside at Hemel Hempstead is The Fishery Inn. The town has sporting clubs for cricket, golf, rugby and football enthusiasts, and Hemel Hempstead Leisure Centre has 25m indoor and outdoor pools, squash courts and sports halls.

There is easy access to an array of footpaths, bridleways and parks that wind through the beautiful surrounding countryside, which is excellent for rambling, running and horse riding. The Chiltern Way passes the end of the road and the Grand Union Canal runs nearby. The old Nickey Railway Line, which previously linked Hemel Hempstead with Redbourn and Harpenden, forms part of the National Cycle Path. Roughdown Common, a SSSI, is on the doorstep and is a mosaic of woodlands, meadows and wildlife habitats; it is perfect for a family day out of playing and picnicking and is excellent for daily dog walks.

Well-regarded schools in the area include Westbrook Hay, Lockers Park, Berkhamsted and Abbotts Hill, as well as Beechwood Park and St Albans .

Hemel Hempstead Station is a just a three minute walk with fast trains frequently running to London Euston taking 25 minutes. The A41 provides quick links to the M1 and M25 and Heathrow, Luton and Stansted Airports are all within a hours journey.

From the Norman period through to the beginning of the industrial revolution Hemel Hempstead was an agricultural market town. The charming Grade I-listed 12th-century St Mary’s church features a 14th-century herringbone-clad spire measuring 200 ft, one of the tallest in Europe.

The town’s convenient placement on the route between London and the Midlands meant it quickly became a natural rest point; a mid-18th-century turnpike roughly followed the route of the current A41. The demand for hospitality in the town grew with the construction of the Grand Union Canal at the close of the 18th century and with Robert Stephenson’s London to Birmingham Railway in 1837.

Despite being well serviced by transport links for centuries, the town remained predominantly agricultural until the mid-20th century. The rural way of life coupled with exceptional transport made Hemel Hempstead one of the world’s first commuter towns.