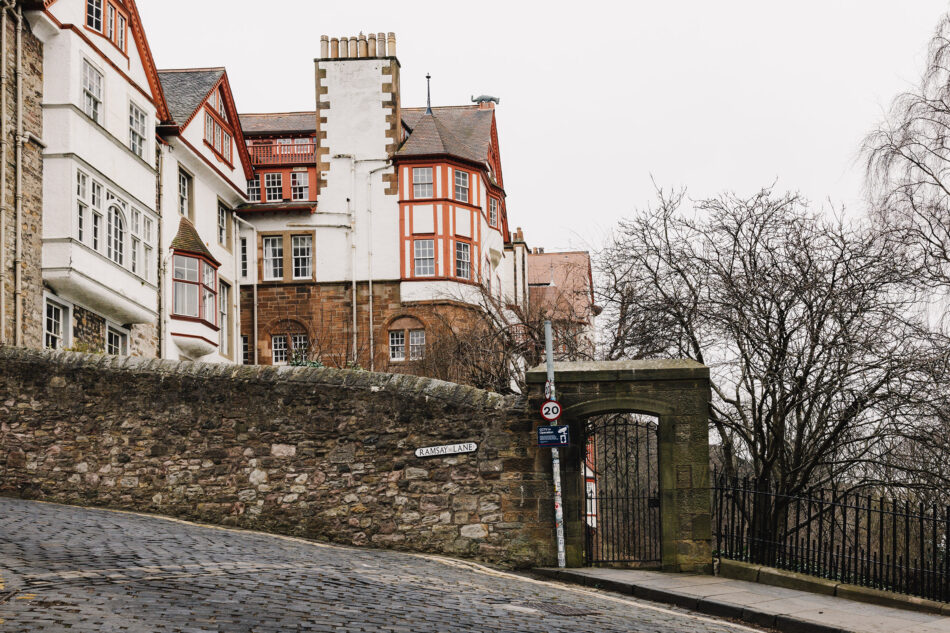 Scottish symbols decorate the walls in the entrance hall, which is framed by a sculptural cantilevered staircase

This wonderful Grade A listed two-bedroom apartment in Edinburgh’s celebrated Ramsay Garden was originally built circa 1760, and is part of a row of Georgian terraced houses. Centrally located and minutes from Edinburgh Waverley station, the flat has far-reaching views over Princes Street Gardens, the Firth of Forth water and the hills of Fife beyond.

Located in Edinburgh’s historic Old Town, a UNESCO World Heritage site, Ramsay Garden is in an enviable position, bookended by Edinburgh Castle to one side and New College (part of the University) to the other. The row of private apartment blocks that make up Ramsay Garden are particularly distinctive within the Old Town area, largely due to their red ashlar and white harled exteriors. The first building, Ramsay Lodge – a unique octagonal house – was constructed in 1733. This was followed by the Georgian houses in 1760, where this apartment sits. The site was then developed in 1890 and 1893 by urban planner Patrick Geddes, who added the Arts and Crafts elements and described it as “the seven-towered castle I built for my beloved.”

Full planning permission has been approved to make various changes to the apartment, as designed by architect Marcus Lee; to open up the two rooms facing the gardens and bathroom, and convert them into a bright open-plan kitchen, dining and living room. In doing so, two more recently installed windows will be restored to match the doorway which will still open onto the gardens. On this floor there will also be a double bedroom, and a shared bathroom. Downstairs, there will be the principal bedroom, which will enjoy a generous study, and a luxurious family bathroom alongside a utility room and a store. The beautiful original barrel-vaulted ceilings will also be revealed. This new bedroom will also be lit by two new full windows and accompanying light-wells.

Entry to the apartment is down a set of external steps that lead into a private courtyard. From here, the front door opens into a wide entrance hall, where the walls are decorated with listed and original Scottish symbols. Dominated by a sculptural cantilevered staircase, which would have once connected the floors in the original house, the hall leads into the generous living room which in turn opens onto the communal grounds. The sitting room retains its original stone hearth, where the stoves in the kitchen would have been found, and which now make a lovely focal point for the room. On this floor, there are currently two double bedrooms, one of which is an en suite, and a shared family bathroom.

The lower ground floor – the original vaults of the building – is home to the open-plan kitchen and dining room. This is characterised by a unique curved ceiling. Also on this level are two smaller rooms with vaulted ceilings, a cupboard and a walk-in store. Throughout the apartment, original sash windows and their shuttering have been carefully maintained.

Sitting atop a hill, Ramsay Garden has expansive views over the city of Edinburgh. This apartment is one of three which enjoys direct access into the communal garden; an incredible space, beautifully planted, with stepped borders leading down the hillside. It is a wonderfully green area of Edinburgh generally, just a stone’s throw from Princes Street Gardens and its famous Ross Fountain, dating from 1872. There is also parkland surrounding the nearby Edinburgh Castle, where a weekly farmer’s market is held on Saturdays.

The East Lothian coastline and exceptional beaches at Seacliff and Tyningham are easily reached in under an hour by car.

Ramsay Garden is incredibly well-positioned in the centre of the Old Town with its largely medieval street plan and maze of winding cobbled streets, yet is also within walking distance of the highlights of the city centre and its exciting independent food scene. Edinburgh’s four Michelin-starred restaurants are easily reached on foot, as are the popular eateries Timberyard, The Little Chartroom, Edinburgh Food Studio, and Scran and Scallie in neighbouring Stockbridge.

Edinburgh is highly esteemed for its year-round programme of cultural activity, world-class exhibitions, music events, an emerging art and design scene and the world-class Edinburgh Fringe festival. The area has a rich picking of both public and private schools, including Loretto, Fettes College, George Heriot’s, Edinburgh Academy and Boroughmuir High School, ranked Scotland’s best state school by The Times in 2019.

National Rail offers direct routes from Edinburgh Waverley to Kings Cross, and Edinburgh International Airport is just a 20-minute journey by car or around 30 minutes by tram.

Please note that all areas, measurements and distances given in these particulars are approximate and rounded. The text, photographs and floor plans are for general guidance only. Inigo has not tested any services, appliances or specific fittings — prospective purchasers are advised to inspect the property themselves. All fixtures, fittings and furniture not specifically itemised within these particulars are deemed removable by the vendor.
Ramsay Garden — Castlehill, Edinburgh
Interested? Let’s talk