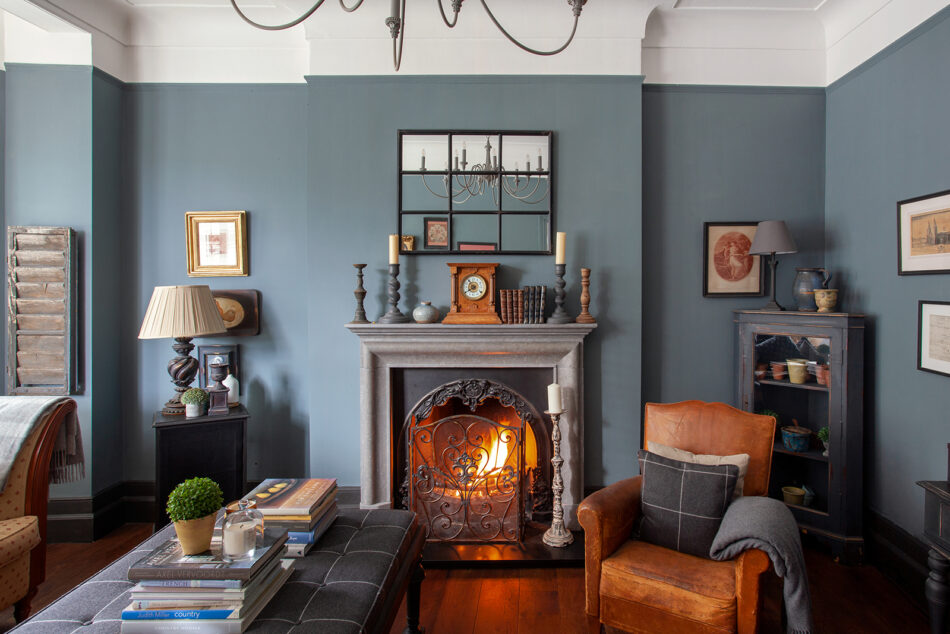 This smart five-bedroom house in Herne Bay in Kent skilfully combines Edwardian proportions with elegant decor. Since its construction in 1905, the building has undergone multiple metamorphoses, culminating in this sensitive restoration by the current owners. A simultaneously moody and monochromatic colour scheme unites the spaces that unfold across 3,100 sq ft. There is a lovely and large mature garden with a summer house, which has ample space for outdoor dining. Its location means it has ready access to both the northern Kentish coastline and London via swift rail links.

Situated at the end of a private road, the house is tranquil yet well-connected, located just outside the centre of Herne Bay. Originally a private school for boys, it was subsequently requisitioned during the World Wars as a base for fighter pilots, some of whom inscribed their names into the brickwork of the façade. In the most recent restoration, the decision was made to unite the disparate sections of the structure into a house that extends over three floors and accentuates the original architecture.

The house has an imposing façade, typical of its Edwardian origins, with double-aspect bay windows and strong bond terracotta brickwork. A bay window, wood accents and white dentils accent the deep colour of the brick. A long monochrome tiled pathway leads from the newly constructed brick and iron fence, past symmetrical manicured shrubbery to the dove grey front door replete with an ionic pediment. For more information, please see the History section.

The front door opens to an imposing hallway, where monochrome tiling echoes the chequerboard tiles on the front path. On entering the house, the bold colour scheme is immediately established; a combination of grey and blue hues emphasise the dramatic Edwardian proportions. Original features such as the ceiling rose, cornicing and architrave are highlighted throughout in white.

Two symmetrical reception rooms occupy the front of the house. The sitting room on the left of the plan has a large bay window that allows light to pour into the room; a box window illuminates the drawing room on the right. As throughout the house, paint by the Paint and Paper Library has been used for the walls – ‘De Nimes’ for the living room and ‘BTWN Dog and Wolf’ for the drawing room – and have original fireplaces, bespoke plantation shutters and glossed wood floors.

The moody colour palette continues into the open-plan kitchen and dining area. Cabinets from Neptune are efficiently designed to maximise preparation space, while wooden shelving adds a Provencal touch. The addition of an orangery means the space is perfect for entertaining. Here, three-quarter length windows, coupled with a skylight, mean the room is filled with natural light, while double French doors create a seamless transition between the interior and exterior spaces. There is a scullery, with space for laundry facilities, just across the corridor.

A sweeping staircase leads from the hallway to the first floor and the three bedrooms. The main bedroom occupies the right wing of the house and has extensive proportions. A warm atmosphere is accentuated by the wooden mantelpiece grounded by a black hearth. An en suite bathroom overlooks the garden through generous sash windows. Painted in Paint and Paper Library ‘Blues Blue’ with sky blue cabinetry, the room’s focal point is the wonderful freestanding bath that is perfectly placed in front of the fireplace.

The second bedroom is similarly spacious and has a large bay window, while the third bedroom is more intimate in scale. In the eaves, a further two bedrooms have south-facing windows, which capture the best of the light. On the first floor, the bathroom is decorated in a monochrome marble tiling and grey wood. One of the two bedrooms on the second floor has a smart en suite shower room.

An extensive lawn is surrounded by mature trees and shrubbery, creating a veritable oasis. The patio leads directly from the garden room and the scullery and has ample space for dining and entertaining. At the bottom of the garden, the white timber summer house provides a focus for the garden and could be used as an office, a games room or a summer house.

Herne Bay is in the district of Canterbury, connected to the rest of the coastline on a pedestrianised pathway by the Saxon Way, which extends from Gravesend to Hastings in East Sussex. Whitstable and Margate are both walkable along this path, as are historical landmarks, such as Reculver Towers. The ancient woodland known as Blean Wood, a dedicated nature reserve which is a haven for sparrowhawks and woodcocks, is a short drive away. The UNESCO city of Canterbury, with its renowned Cathedral, is six miles away.

The area has an increasingly flourishing food and drinks scene. In Herne Bay, A Casa Mia is the only pizzeria in England to be recognised by the Associazione Verace Pizza Napoletana. At the same time, nearby Whistable has a host of seafood options, ranging from the Oyster Co. and Wheelers Oyster Bar to The Neptune. Other dining options within a half-hour drive include the Michelin-starred The Fordwich Arms,  The Pig at Bridge Place and The Goods Shed in Canterbury, driven by local produce.

Schools in the area are also very good/ For primary options, both Herne Church of England Junior School and Reculver Church of England Primary School are OFSTED rated Outstanding. In Canterbury, there is the independent St Edmund’s and King’s School, and the city also has three excellent grammar schools, Barton Court and Simon Langton.

The M2 and the M20 connect to central London in 70 miles and takes 1 hour 20 minutes. Canterbury West mainline station, a 15-minute drive from Parsonage Road, runs services into London St Pancras in under an hour.

Hearne Bay’s history stretches back to 1100 AD, but it was the early 19th century when the town saw real expansion. Before 1830, it had been a cluster of fisherman’s villages, but like many places on the coast of England, the Victorians made it into a seaside retreat.

A pier and promenade were built, and the town acted as a stopping point on the route of paddle steamers that ran between London and Margate. In 1837, it became the site of the world’s first freestanding, purpose-built clock tower.

The building was originally The Parsonage House private school for boys. Due to its proximity to the Manston air base, the house was commandeered by British RAF pilots in World War I, and in World War II, it served as an accommodation for USAF pilots.