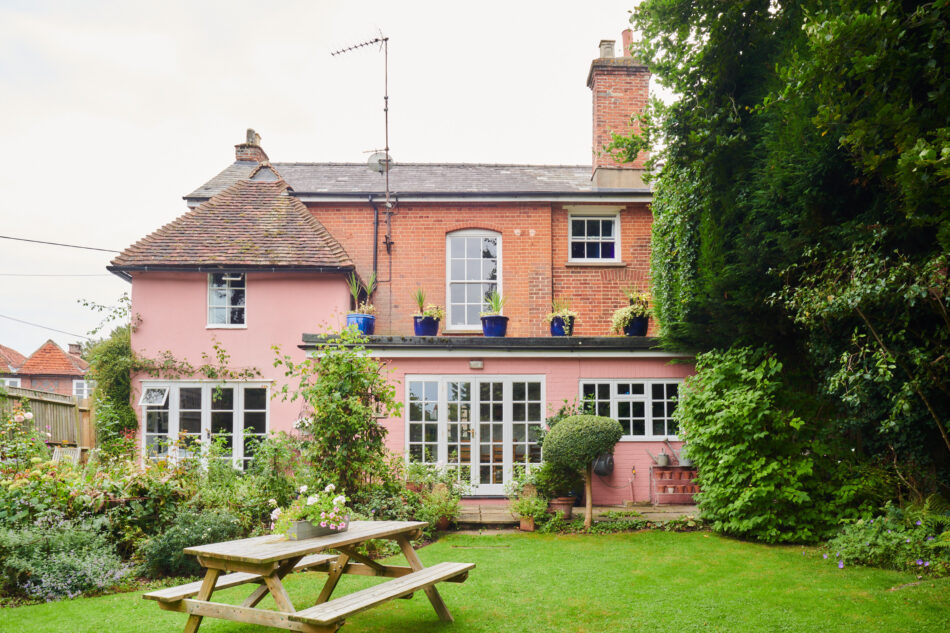 The owner has grown the garden biodynamically, filling the borders with a fantastic combination of colourful flowers

This lovely Grade-II listed four-bedroom house is nestled in the centre of the pretty village of Crondall, on the Surrey/Hampshire border. The house, dating from the early 15th century, was remodelled and extended in the Georgian period and then again in 1899 after a fire in the village. Unfolding over 2,000 sq ft, the house is composed of a series of bright rooms, some with original exposed beams and others with elegant Georgian symmetry. This sought-after village is full of handsome period homes, complete with a Grade I-listed 12th-century church and a Grade II-listed pub, the Plume of Feathers.

Believed to be the second oldest house in the village, much of the medieval frame remains intact, both internally and externally. One elevation on Pankridge Street has changed so little that the side view of the house from further down the street remains almost as it would have been in the 15th century. The house has undergone numerous transformations over the centuries, resulting in an interesting evolution of medieval, Georgian and Edwardian elements.

Some of the timbers date from the early 15th century and could have been reclaimed from ships since they have particularly large joists. The infill between those joists and beams would have been wattle and daub. For more information, please see the History section.

The front door opens in a generous hallway, flanked by two sitting rooms at the front of the plan. Each room is arranged around a fireplace, one housing a working open fire, the other a gas coal fire. The sitting room to the left has a beautiful, restored parquet floor. A third living space in the medieval part of the house has original beams in the ceilings and walls and has been updated with a wall of glazing and a pair of French doors that open onto the secluded garden.

Adjacent is a kitchen with terracotta-coloured tiles on the floor, black granite-topped kitchen units and a further length of glazing, which bathes the room in light. A warming Aga sits to one side of the room in an alcove decorated with blue-and-white chequered tiles. There is also floor-to-ceiling built-in shelving, perfect for storing cookery books. Doors open from here into the garden.

Ascending upstairs to the first floor are four comfortable and bright bedrooms. The main bedroom has an en suite shower room, and there is a separate family bathroom with tongue-and-groove panelling. The medieval solar (bedroom) – which sits in the oldest part of the house – is almost in its original form; it has plastered ceilings with it’s original beams exposed. One of the bedrooms at the front of the house is currently being used as a study, its timber frame revealed by the current owners when they renovated the room.

The house has a pretty, private rear garden, with a patio area perfect for outdoor dining. The owner, who has been careful to cultivate it biodynamically, has filled the borders abundantly with a seasonal succession of colourful herbaceous perennials, English roses, bulbs and shrubs, surrounded by mature trees. A summer house sits in one corner of the garden, creating seating and shelter from rain or sun.

To the rear of the garden is a gate leading to a large double garage.

The house is well situated in the heart of the picturesque village of Crondall. Within walking distance is an Ofsted-rated “Outstanding” primary school, a Montessori Nursery, a village shop with a post office, two popular historic pubs, a state of the art winery, a recreation ground with children’s play area, and an exceptional Norman church. The countryside surrounding Crondall and the neighbouring village of Ewshot, is some of the most attractive in the South East.

Crondall is a short drive from Farnham; a market town routinely named one of the best places to live in the UK thanks to its historic town centre, vibrant cultural life, excellent transport links and the beauty of the surrounding countryside. The Telegraph described it in a survey of outstanding British towns as “a bustling town which has 38,000 residents, plenty of green space and is rich in Georgian architecture”.

Train services to London Waterloo run from Farnham, Winchfield and Fleet in under an hour. Crondall also has easy access to the M3 and A3, ideally positioned for airports and the south coast.

Crondall was mentioned in the Domesday book of 1086. A ‘crundel’ in Old English was a chalk-pit or lime quarry, and its name has survived as Crondall. In fact, the remains of one of those quarries can be seen as a depression on the local golf course.

Discovered locally in 1828, much of the historically important Crondall Hoard of old French and Anglo-Saxon coins, some dating to the fifth century, is now in the possession of the Ashmolean Museum at Oxford.

The beautiful Grade-I listed Norman church has had many additions and modifications over the centuries, including a prominent brick bell tower which was built in 1659 to replace the 12th-century tower which had become unstable. John Betjeman described the chancel as “splendid”.