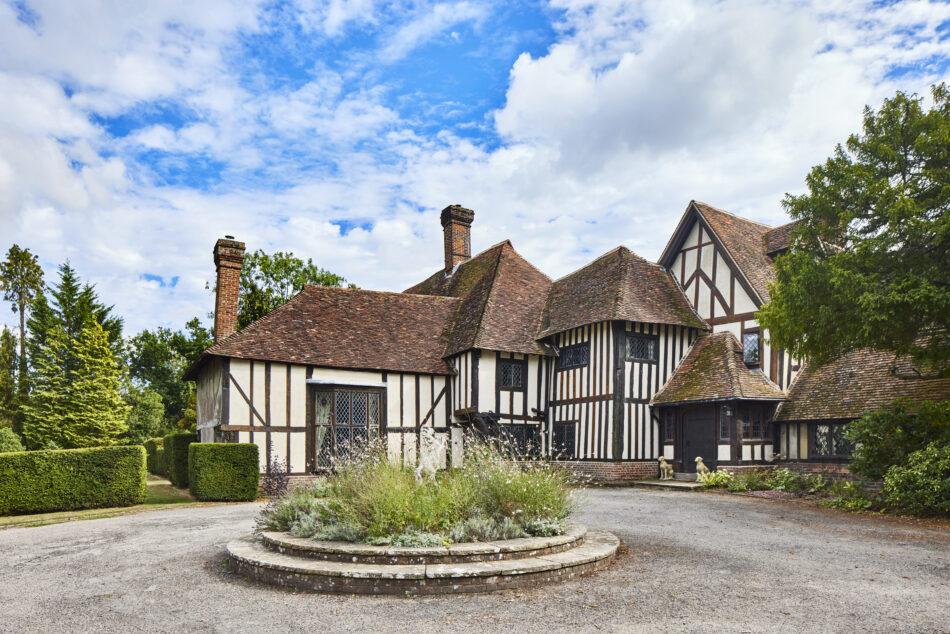 A house of exquisite originality and contemporary convenience

Wrapped in over 16 acres of tranquil formal gardens, paddocks and bluebell woodland around a private lake, the Grade II-listed Old Manor House is a historic 15th-century Wealden hall in the sought-after village of Benenden, Kent. It is a house of exceptional character and has been the subject of a comprehensive renovation by the current owners, who have given careful attention to restorative elements while sensitively ushering in aspects of modernity. The partially-moated main house exceeds 9,000 sq ft internally and incorporates seven bedrooms and several versatile living and study spaces. A further 6,000 sq ft of outbuildings are spread across the immediate gardens, with renovated stables, a triple garage, a wood workshop and an open barn. In addition, there is a kitchen garden with an orchard, a heated swimming pool with a pool house, a tennis court with a pavilion, a two-bedroom adjoining cottage within the west wing, and a light-filled pilates studio.

Old Manor House is one of the earliest of its kind in Kent. The original Manor of Benenden appears in the Domesday Book as one of the possessions that William the Conqueror gave to Odo, his brother, the Bishop of Bayeux. Its later custodians have been no less noteworthy: it was owned by Viscount Rothermere, who founded the Daily Mail at the turn of the century. It was re-fronted in the 19th century and fully restored in the 20th century when a west wing was added to create an L-shaped building running east to west, beautifully capturing the eastern, southerly and western light from sunrise to sunset. For more information, please see the History section.

A discrete entrance leads from the quiet lane to the principal driveway, which meanders beneath mature trees, past the tennis court and swimming pool, and culminates in a turning circle with parking for several vehicles.

Beyond the hall, to the north, is a library and formal sitting room lit by leaded mullion windows from three aspects. Its soaring ceilings allow for a minstrels gallery at one end, straddling the exposed brick of an internal tapering chimney.

East of the grand hall are two rooms. The first is a more intimate, bright sitting room with a wood-burning stove set within an inglenook that extends across almost the entire width of the western wall. One window looks out onto the formal front lawns, while a bay window opposite reveals a courtyard, lawn and the moat beyond. Doorways along the eastern wall lead through to a panelled study with an ancient fireplace believed to date back to the time of William the Conqueror, and a secondary entrance hall with one of the two original servants’ staircases that ascend to the first floor.

This older wing offers two further entrances; one via the formal rose garden and a second from the courtyard. Internally, the main entrance moves through a bay-windowed dining room into the kitchen and, in turn, to a pantry and further study. Within this section, there is also a generous utility room with a larder and boot room.

The is a wonderful flow of connecting spaces in the Old Manor owing to four independent staircases within the main house. Seven bedrooms and six bathrooms are spread across the first and second floors. Three of these bedrooms are located in the original east wing and are arranged on either side of a central living room. Above this living room, and accessible via a separate staircase through a discreet door is a brilliantly utilised loft space, which has been expertly and sensitively converted into a six-seat cinema.

In the west wing, the main bedroom suite offers a magnificent glass-cabinet double dressing room. The attic suite above contains a further bedroom, study and bathroom, and adjoined to the tip of this wing is a two-bedroom cottage.

This is a house of exquisite originality and contemporary convenience. On the surface, the rich tapestry of stone and brick fireplaces against fine, ancient oak joinery, panelling and beam work has been given centre stage, while beneath it all, plumbing and electrics have been overhauled, with phone signal and high-speed wifi introduced throughout. Sympathetic and incredibly discreet double-glazing, along with handmade thermal-lined curtains throughout, provide insulation through the cooler climes.

The house itself is orientated to make the most of the southern light, and its front façades duly look out onto formal lawns and rose gardens. These are connected by ancient limestone pathways that create routes to the 15th-century lychgate for the short stroll to the village’s amenities. Borders of mature trees and the buffer of lawns ensure its insulation from the outside world: this is a private and expansive haven. Further along the southern border is a substantial kitchen garden, installed with beautiful evening lighting. It offers a variety of raised beds, a diverse and mature orchard and a long, elegant timber-framed, heated greenhouse along with a potting shed and tool store. These areas, along with the grounds, woods and gardens, have been subject to extensive renovation and overhaul by the current owners.

Immediately to the north is a large lawn with a heated swimming pool and pool house. Beyond lies a tennis court and pavilion that form a border to the private paddocks.

Along the western line of the curtilage and accessible through a separate stable entrance runs a lane that passes four timber-framed carports and a garage. It leads down to a recently renovated stable yard equipped with tack and feed rooms, a farrier station and a large open barn, all arranged around a spacious concrete courtyard.

Benenden is a picturesque, thriving village: one of the most sought-after in the High Weald of Kent. Despite the scale and privacy of Old Manor House, the village hub is a short walk away, including the longstanding Ward and Sons butchers and a village shop with its post office and café. A number of great country pubs are close to hand: the nearest being The Bull at Benenden, a three-minute stroll across the village green where it has stood since the 17th century. It is famous in the area for its excellent food and hospitality.

A mere five miles away is the charming, historic town of Tenterden. Here, a wide high street separates lines of boutiques, artisan and antique shops, restaurants, pubs and cafes, as well as a large Waitrose. The area is well served by supermarkets and independent farm shops, including Hartley Coffee House and Farm Shop, just 3.4 miles away with a fine fishmonger, butchers, a bakery and a cafe.

To the south-east, and only 14 miles away, lie the beaches of Camber Sands, and the historic, bustling town of Rye, with its famous links golf course and vibrant selection of antique shops. Meanwhile, 17 miles north, the popular hub of Tunbridge Wells is conveniently placed with its plentiful restaurants, cafes, bars and shops.

Gatwick (49 miles) and Heathrow (70 miles) airports are accessible via the M25, which is easily reached via the A21.

The place name of Benenden derives from Old English meaning ‘Bynna’s wooded pasture’. Though it’s difficult to pinpoint the date of the establishment of Benenden as a village, and while evidence of Roman industrialism is scattered within the vicinty, the Doomsday Book surveyors offer a clue that its existence at the least paralleled the reign of William the Conquerer.

From the 14th century, Beneden became well-know for its industrial importance, being a hub for cloth-making and iron. By the late 18th century, however, both industries had moved to the north, and Benenden’s prosperity was at an end. Benenden had four mills at various times. Wandle Mill, a watermill on the River Rother; East End Mill, a post mill at the site later occupied by the chest hospital, demolished c.1870; and a pair of mills to the east of the village, one of which, Beacon Mill is still standing.

In 1860 Gathorne Hardy, later to become the 1st Earl of Cranbrook (1814–1906), a prominent politician, rebuilt the house in Hemsted Park, one of the Tudor buildings; in 1912 Lord Rothermere made further alterations. It now houses Benenden School

Cricket has been played on the village green since the 18th century, although the first known mention of an organised club was not until 1798. To the present day with the club still play in front of the St George’s parish church and between the Bull Inn and King William IV pub.