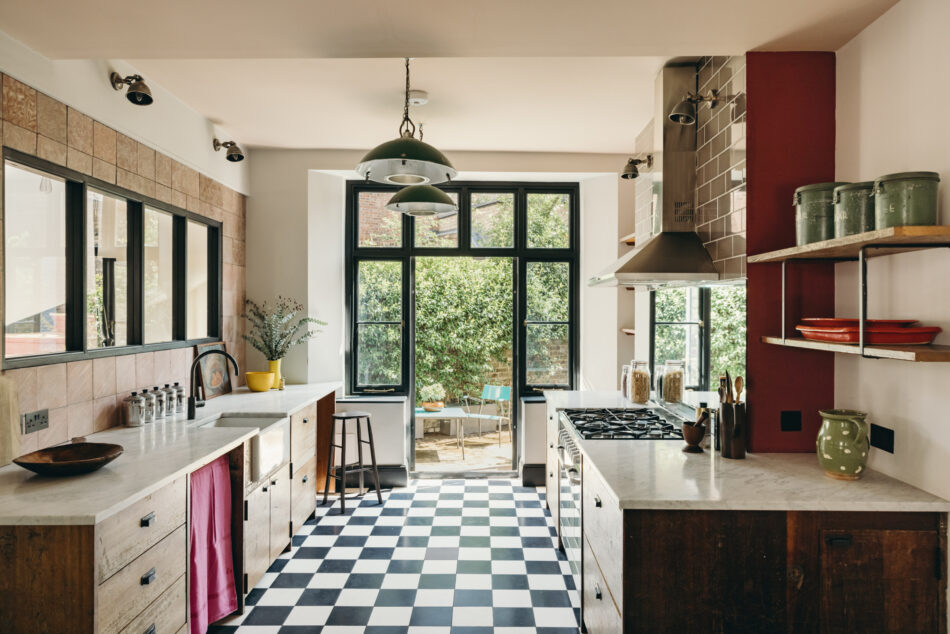 Lying on what is arguably one of London's most important garden squares, the home is replete with original architectural details and features

This handsome Grade II-listed, late-Georgian house lies on a coveted and secluded corner of Northampton Square in Clerkenwell, on the edges of Finsbury. Northampton Square is one of the earliest developments in the area and arguably its most important and historic garden square. This six-bedroom house has been beautifully renovated in recent years, carefully preserving the abundance of original features while introducing design elements complementary to the building’s history. Incredibly peaceful for such a central location, the house is laid out over five light-filled levels and measures over 3,300 sq ft internally. Original decorative iron Juliet balconies feature at all first-floor fenestration and there is a private courtyard garden.

The square and gardens were originally built on a diagonal plan in 1803, with the houses at the north-eastern side built between 1809-13 to designs by Samuel Pepys Cockerell, a descendent of diarist Samuel Pepys. Northampton Square takes its name from the then-local landowner, the Marquess of Northampton, and formed the jewel at the centre of the Northampton family’s London estate. Prior to the square and surrounding area’s development, it was pastoral land, known locally as Wells Close. Cockerell, who designed the square, was also responsible for designing much of Bayswater, the Pulteney Estate in Bath, and most famously, Sezincote House in Gloucestershire; his designs for Northampton Square became the standard across east and north London in the 1820s.

The square historically housed clockmakers, jewellers, silversmiths and other fine craftsmen, right up until the 1960s. This house forms a wedge-shaped building and was originally built as the Ashby Castle. It remained a public house until 1882; thereafter it became the Northampton estate’s London offices. Later, the house was divided into flats and named Quill House, a nod to the local clerks that had previously worked there, before being returned to a single-occupancy building and finally crafted into a beautiful contemporary home by the current owner. Miraculously, many of the original features remained intact, waiting to be uncovered, including an exceptional winding box staircase.

The house has a simple façade of stock brick set in Flemish bond, with a dentil cornice at the second storey and relieved arches to the windows – round-headed at ground and first floor – and a mansard roof of Welsh slate with three barrel-roofed dormer windows. Set behind cast-iron railings at street level with its entrance at the adjunct on Ashby Street, a deep blue-painted door opens into a large central hallway with black and white chequered tiles underfoot. Pale, stone-coloured butt and bead panelling adds depth to the space, while Crittall-style glass and wood partitions painted dark grey are positioned to either side, separating the living spaces while allowing light to flood across the entire floor.

A study lies on the left behind glass wedding doors. This has a beautiful chimneypiece and wooden shutters, which encase all ground floor street-facing windows. To the right is the heart of the home: a capacious dining room leading to the kitchen, with views through French windows onto the courtyard garden and a wall of fragrant jasmine. A slate chimneypiece grounds the room, while tripartite sash windows allow light to envelop the space. A charming mix of reconditioned antique and replica cast-iron radiators feature. The kitchen houses plentiful cabinetry in rough-hewn oak with concealed appliances, Carrara marble worktops, a butler sink and a generous range stove.

Ascending the winding staircase from the hallway, windows on each landing bring a unique quality of light to the rear of the house. The deep wooden treads have been hand-sanded by a historic flooring specialist and left untreated to wonderous effect, as have the floors of all upper storeys of the house. The first-floor drawing room lies directly ahead, wrapping around the entire front of the plan. This is an exceptional space, with four full-height sash windows facing plane trees in the garden square, wonderful tall ceilings and excellent plaster cornicing. Two working fires with bullseye marble chimneypieces are positioned at either end of the room. A generous shower room encased in hand-glazed dark green metro tiles lies at the rear of the plan.

The second floor is home to the main bedroom, plus a secondary connected bedroom that could also be configured as a walk-in wardrobe or nursery. The beautiful en suite bathroom features a freestanding bath with easterly views over London rooftops, and a decorative Edwardian glazed chimneypiece (a later addition). Two further bedrooms are housed in the garret at the apex of the house, where the pitched roof and supporting beams have been exposed, lending a sense of space and character unique to this floor. The bedrooms have arched dormer windows and share a lovely shower room.

The lower ground floor contains two separate bedrooms, with ‘secret’ jib doors leading to under-street pavement vaults from each space. Lightwells at ground level draw light into the bedrooms from the front of the plan. There is also a separate shower room and utility room. This floor is particularly useful, possibly for a nanny, older children requiring a degree of independence, or as separate office spaces.

The east-facing courtyard garden is brilliantly positioned to enjoy the morning sun and is extremely private and quiet. Wonderfully easy to maintain, it is also perfect for alfresco drinks or supper in warmer months.

The gardens of Northampton Square were originally created for the sole use of residents but were finally opened to the public in 1885. The famed landscape gardener Fanny Wilkinson – who designed many of London’s most important garden squares – redesigned the gardens in 1935 to the more circular layout seen today, including a drinking fountain to commemorate the 1885 opening to the public, as well as a charming bandstand, refurbished in 2011. The much-loved Café Fiori now occupies the old park keeper’s lodge within the square, serving excellent sandwiches and coffee to residents.

Northampton Square is brilliantly located, equidistant from Islington to the north and Old Street to the south. It is on the periphery of an area renowned as a hub for the creative, design and tech industries, and for the quality and variety of its bars and restaurants. Upper Street is a short walk away, as is Exmouth Market, with firm local favourite restaurant Moro being among the original inhabitants of the street. St Paul’s Cathedral, Smithfield Market and the City are within easy reach to the south of the square. St John Street has a convenient Waitrose, as well as the famous St. John restaurant. Additionally, the Barbican Centre, with its world-class cultural programme of cinema, music, theatre, talks and exhibitions, is a few minutes walk away.

Angel is the closest tube station – less than five minutes walk – and runs Northern Line services citywide. Nearby Farringdon station (Circle, Metropolitan and Hammersmith & City Lines, and National Rail/Thameslink) provides quick access to locations across London and, as of 2022, Heathrow Airport, care of the forthcoming Elizabeth Line (Crossrail). Journey times to main terminals will be less than 30 minutes. The Eurostar is available at King’s Cross St Pancras, a five-minute drive away from Northampton Square.

Please note that all areas, measurements and distances given in these particulars are approximate and rounded. The text, photographs and floor plans are for general guidance only. Inigo has not tested any services, appliances or specific fittings — prospective purchasers are advised to inspect the property themselves. All fixtures, fittings and furniture not specifically itemised within these particulars are deemed removable by the vendor.
Northampton Square — London EC1
Interested? Let’s talk