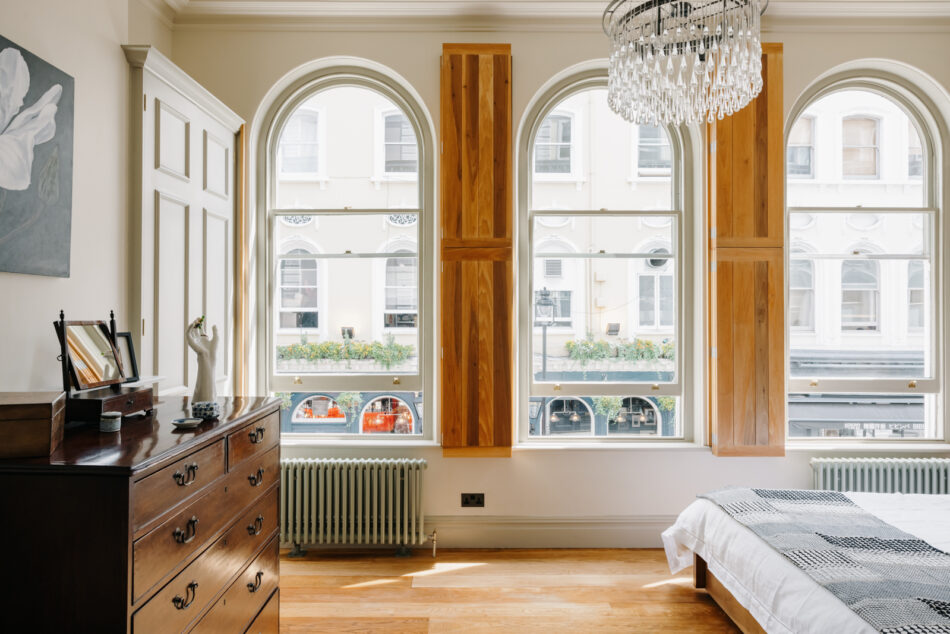 This magnificent two-bedroom apartment occupies the first floor of a handsome, Grade II listed, residential building in the heart of Bloomsbury, which overlooks the monumental Greek Revival portico of The British Museum. The internal spaces have recently undergone an intricate refurbishment in oak and poplar care of ooma design and are characterised by beautiful arched sash windows.

Museum Street runs through the heart of Bloomsbury, ultimately arriving at the handsome frontage of The British Museum (from which the street takes its name). The area is perhaps most renowned for its association with the bohemian group of 20th-century writers and artists including Virginia Woolf, Vanessa Bell and E. M. Forster, known as the Bloomsbury Set. It is one of London’s most desirable neighbourhoods, characterised by stately residential squares and its proximity to University College London, RADA, the Architectural Association and Senate House Library.

Museum Street itself has its origins in the 14th century; however, it remained largely rural until the late 17th century when London greatly expanded. This included the establishment of the British Museum in 1753. In the early 19th century, the street became a fashionable area, with many prominent writers of the day gathering in its taverns, including Charles Dickens, John Keats and George Orwell, as well as the Bloomsbury Set.

The apartment is configured around a large open-plan kitchen, living and dining room lined with solid oak floorboards. Five beautiful arched sash windows frame exceptional views through a row of London Plane trees, towards The British Museum piazza. High ceilings and a curved aspect emphasise the flow of natural light across the plan, which illuminates the solid oak joinery and black Zimbabwean granite worktops. The kitchen is positioned at one end of the plan and has integrated Gaggenau appliances, oak-fronted units and plenty of storage space.

A large main bedroom with an en suite shower room lies off the main hallway. These spaces have been the subject of a sensitive intervention by John Griffiths, who has created bespoke shutters in poplar wood for each of the three arched sash windows in the bedroom, as well as refurbishing the shower room, which is now partially lined and fitted in beautifully aged teak.

Opposite is the second bedroom, used by the current owners as a home studio. It has bespoke polished plywood-fronted storage units and a concealed desk, perfect for working from home. A full bathroom is positioned next to the bedroom and has Fired Earth tiles throughout. A convenient cloakroom with further storage space can be found along the hallway.

Residents of the building have a key for Bedford Square Gardens; a private garden square that is a lovely place to spend lazy, languorous afternoons. Bloomsbury Square Gardens – Bloomsbury’s oldest square, laid out in 1665 – is also nearby, as is the famous Russell Square. Lincoln’s Inn Fields are a 10-minute walk away, and are home to both tennis and netball courts, which can be hired by the public. Gray’s Inn Gardens and Coram’s Fields are also close at hand.

Museum Street is in a fantastic position, right in the heart of London. Nearby Lamb’s Conduit Street is home to an interesting community of independent shops spread along a pedestrianised street. The Brunswick Centre, a short walk away, has a cinema and a Waitrose supermarket. The restaurants and bars of Clerkenwell, Exmouth Market, Covent Garden and Soho are all within walking distance, as are the colleges and institutes of the University of London. There are vast numbers of hidden pubs and restaurants in Bloomsbury; of particular note is the newly opened Café Deco on Store Street.

Please note that all areas, measurements and distances given in these particulars are approximate and rounded. The text, photographs and floor plans are for general guidance only. Inigo has not tested any services, appliances or specific fittings — prospective purchasers are advised to inspect the property themselves. All fixtures, fittings and furniture not specifically itemised within these particulars are deemed removable by the vendor.
Museum Street — London WC1
Interested? Let’s talk