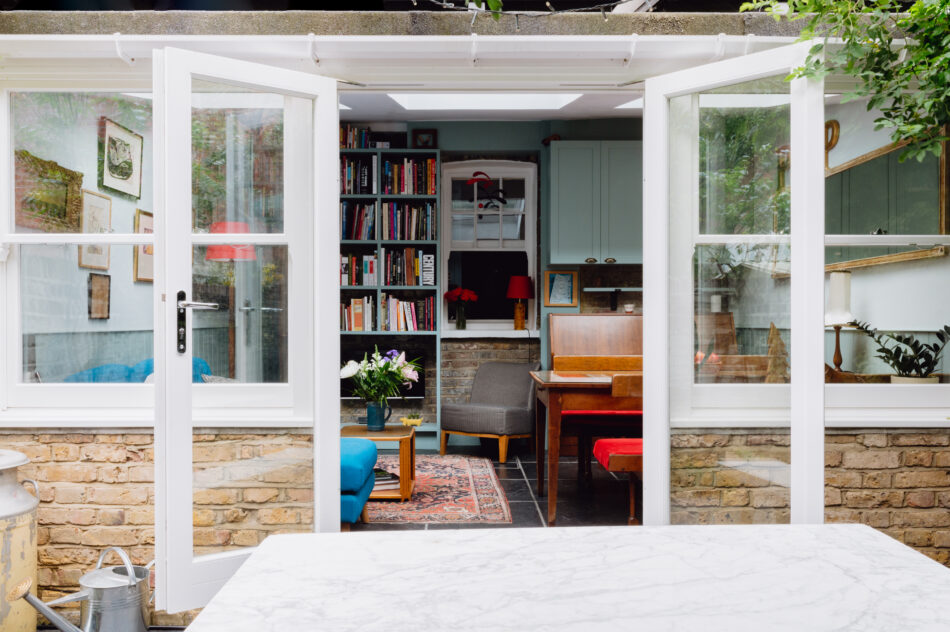 This fantastic three-bedroom Regency house lies in a brilliant position in Barnsbury, north London. One of a terrace of 17 houses on Moon Street, a pretty, quiet mews, it is set back from the bustle of Upper Street yet just a stroll away from the vibrancy of city life. Complete with a further studio space in the walled garden, the house also has a light-filled lean-to extension which is home to a bright and airy dining/living room.

The terrace of houses on Moon Street was built in 1825. It was the first section to be built in the Milner-Gibson estate, which is now one of the most sought-after areas in Barnsbury. The houses were most likely built to house the foremen and managers of the building sites in the surrounding streets. Instead of a basement, they have three storeys above ground level so are filled with an exceptional quality of natural light.

The house has a fascinating and varied history. The 1911 census shows three different households – a total of 12 people – living in the house at the time, likely due to the poverty of the area in these years. Over the ensuing decades, occupants have included an upholsterer, a dressmaker, a jeweller, a carpenter, an artificial florist, a wine merchant’s assistant and a chocolate packer.

The rear garden wall bears a plaque from 1905, claiming that it was the property of the postmaster general; the redbrick Edwardian building behind was formerly the North London Sorting Office.

Entry is into a long hallway, with a room immediately to the left that is currently configured as a recording studio (sound-proofed, triple-glazed and air-conditioned). Over the years it has variously been used as a living room and a bedroom and could easily be re-converted; it would also make a fantastically quiet home workspace.

The current owner used to own a restaurant and designed the kitchen herself, resulting in a carefully considered, eminently functional space. The solid oak doors have been painted a charming duck-egg blue and have mismatched vintage cup handles. The worktop, bookshelves and spice shelf are also solid oak. One wall is lined by a pegboard, inspired by the famous cookery writer Julia Child’s kitchen. Above the cooker is a set of vintage handmade lustre tiles from Aldermaston Pottery. The original rear window has been retained, providing a connection from the kitchen into the extension, but the wall could easily be removed to open it up completely.

The rear of the house contains the open-plan living and dining space. Three large roof lights and a wall of glazing let in a brilliant quality of natural light; the wall of glazing opens directly onto the garden. Duck-egg blue wooden wainscot panelling clads the walls, while slate tiles run underfoot.

Stairs with a stripy runner lead to the top two floors, where there are three double bedrooms, one of which is currently used as a study. Each has been painted a different colour, from a rich red to a light blue. The second-floor bedroom has bespoke, handmade black walnut wardrobes, a matching bed with storage underneath and Anglepoise wall lamps. The room is notably light and not overlooked, as the houses opposite are only two storeys high. Instead, there is a lovely view out to the trees in the gardens of Theberton Street. The second-floor study has bespoke, handmade painted bookshelves and cupboards with vintage porcelain door handles. There is also a shared family bathroom with wooden floorboards and yellow and white brick tiles, plus a shelf salvaged from an old church pew.

The house has a private walled garden to the rear, which is also home to a separate studio/storage space complete with electrics. There is a very productive organic plum tree and a herb bed.

The house is close to Barnsbury’s abundance of leafy squares; from the famous Gibson Square Gardens, which was built 10 years after Moon Street, to Islington Green.

Moon Street is in a fantastic location, wonderfully quiet yet a stone’s throw from the plethora of boutiques and restaurants in Angel and Highbury & Islington. The Almeida and King’s Head theatres are both a couple of minutes’ walk from the house, as are the Old Red Lion Theatre and the Screen on the Green. The area has some very good gastropubs, including The Drapers Arms and The Albion. Corbin and King’s Bellanger is nearby on Islington Green. The new Islington Square development with shops and restaurants, plus a gym, cinema and yoga studio, is minutes from the house.

Angel itself is situated midway between Regent’s Park and Victoria Park along the Regent’s Canal. Access to the popular canal towpath is only a couple of streets away, which gives pleasant, traffic-free access to the new King’s Cross Quarter and Coal Drops Yard in one direction, and the popular cafes and bars of Dalston and Hackney in the other. The much-admired bars, pubs and shops of Clerkenwell and Exmouth Market are close by, as are the delicatessens of Highbury Barn and the green open space of Highbury Fields, which has tennis courts, a playground and a swimming pool.

The Underground is available at Angel (Northern Line) and Highbury & Islington (Victoria Line and Overground) and the Eurostar at King’s Cross St Pancras is a short walk away.

Please note that all areas, measurements and distances given in these particulars are approximate and rounded. The text, photographs and floor plans are for general guidance only. Inigo has not tested any services, appliances or specific fittings — prospective purchasers are advised to inspect the property themselves. All fixtures, fittings and furniture not specifically itemised within these particulars are deemed removable by the vendor.
Moon Street — London N1
Interested? Let’s talk