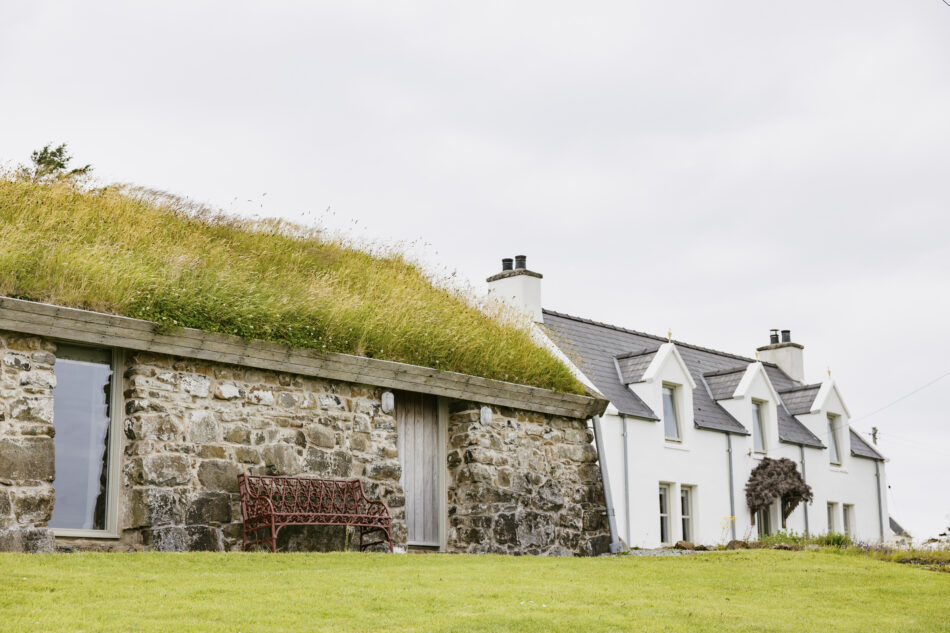 Pods of of dolphins, porpoises, minke whales and sea eagles can be seen from the house

This incredible group of three houses is found on the Isle of Skye’s beautiful, dramatic north-eastern coastline. Mint Croft is made up of a Croft House, a Blackhouse and a recently completed black corrugated metal-clad Bothy, as well as useful outbuildings and just under seven acres of croft land. The current owners, a professional builder and designer, have carefully restored the two older houses over the years of their custodianship, researching traditional construction techniques and doing much of the work themselves. The result are these impressive and unique houses, each full of original features, new additions and spectacular views over the croft land, the sea and nearby islands.

Mint Croft is located in Geary, a small hamlet of houses situated in the district of Waternish, an area steeped in history. The current owners, who had been visiting the Highlands for most of their lives, moved to the island about eleven years ago. They fell in love with the vernacular buildings and crofting (traditional, small-scale farming unique to the Highlands and Islands of Scotland) and followed in the footsteps of the generations who have worked this land before.

Both houses, and the newly built Bothy, have stunning panoramic sea views across Loch Snizort to the Ascribe Islands, Trotternish Ridge and the islands of Harris and Lewis. From the houses, in the summer,  pods of dolphins, porpoises and minke whales can be seen in the Loch. Families of white tailed sea eagles nest in the sea cliffs and herds of Red and Roe deer roam all year through the crofts. It is also possible to climb from the croft land through hazel wood and onto the beach. For more information, please see the History section below.

The houses are approached via a private driveway leading to space for parking for multiple cars. Croft House is painted white and positioned behind a herb garden; entry is to a wide hallway. To the left is an open-plan kitchen and dining room, complete with a DeVol kitchen. The kitchen has been painted a subtle village green to reflect the colour of the landscape. The cabinetry is set against smart slate tiles. Two tall windows frame views over the sea, while a deep original stone fireplace provides a decorative focal point for the room. On the other side of the house is the sitting room, a more intimate space that shares the same incredible views, painted in Lime by Farrow & Ball, with oak floorboards underfoot. There is also a guest WC on this floor.

The first floor is home to two generous double bedrooms, each with high ceilings and exposed local Douglas fir beams. A Fired Earth bathroom has a large bath with a rain shower over. Window seats here make a fantastic perch to observe the panoramic views. Curtains and blinds throughout all three houses are custom made, with fabric from Schumacher, Liberty, Sanderson, Osborne and Little, Thibaut and Harlequin.

Entry to Blackhouse is through a heavy handmade oak door and into a hallway. An open-plan living room, kitchen and dining room is to one side, with low windows framing views over the front garden. Here, there is another DeVol kitchen, with a marble-tiled splashback and dark black Indian limestone on the floor. The original stone gable wall has been restored and left exposed; the rest of the walls have been carefully plastered with incredible attention to detail. The room is crowned with high ceilings, Douglas fir beams, and skylights that reveal the natural grasses on the turf roof.

The corridor leads to the rear of the house, which is situated in the old hayloft. Here there is a shared Fired Earth bathroom, hidden storage and stairs that ascend to the bedroom. This is a fantastic, light space, with a wall of glazing framing the croft, the seascape and, in the morning, the sunrise over the water.

The Bothy sits raised at the top of the site. Recently finished in a similar vernacular to Skye’s outbuildings, it has been clad in black, punctuated by contemporary window frames. A door opens into the main living, kitchen and dining space, which, at the moment, doubles as a bedroom. The mono-pitched ceilings make the room feel particularly airy. There is also a shower room with Fired Earth fittings and colourful Claybrook tiles. This space could be a fantastic studio or office.

The croft land in front of the cottages is said to be one of the last undeveloped coastal crofting strips in the Highlands. It runs from the no-through road all the way to the sea. At the moment, sheep are kept on the land, but it could make a great home for horses, or with the addition of polytunnels could be a great place to have a kitchen or market garden.

A herb garden sits immediately in front of Croft House, with at least 15 different varieties of herbs, including mint, which like the wild mint found on the croft land, grows well here.

There are also three outbuildings; a red-roofed barn, which is a useful storage space but could also make another studio space, a wood shed, which is currently being used as a generous workshop and a turf-roofed shed, which services the croft land and adds more storage space.

Behind the Bothy is a sheltered area where the owners like to keep a firepit and seating.

Depending on the light, the Shiant Islands, eight miles from the house, look like you could touch them. Every day, Geary is witness to majestic light conditions over Loch Snizort and out to the Minch. Even after ten years of living on Mint Croft, the owners continue to be mesmerised by it.

Mint Croft is on a fantastically beautiful and wild stretch of Skye’s coastline. As a result, there are many walks directly from the house’s front door. The island also offers excellent scope for mountain walking and hiking through the surrounding landscape, awash with extraordinary wildlife. The area is also renowned for a Bortle grade-2 night sky: Aurora Borealis, The Milky Way, and noctilucent clouds make regular and spectacular appearances.

The island is now home to many brilliant restaurants, including Michelin-starred Loch Bay restaurant, which is less than 10 minutes from the house. The restaurant is a short walk from The Stein Inn – the oldest inn on the island, dating back to the 18th century. There is also the popular restaurant Edinbane Lodge, located in a 16th-century hunting lodge, world renowned Three Chimneys and many other cafes and eateries. A local fisherman also delivers freshly caught crustaceans throughout the week.

There is a primary school nearby, while the high school is found in Portree; a local mini-bus service takes children to the school.

Skye is connected to the mainland by a free road bridge. In terms of transport links, there is a bus service from Portree to Glasgow and Inverness. Otherwise, it is approximately a three-and-a-half-hour drive to Inverness, where a plane takes around an hour to London Luton and Gatwick. There are also regular and sleeper trains from Inverness to London. Ferries from the island also go to Mallaig on the mainland and the nearby islands of Harris and Lewis.

Neolithic structures can be found on Waternish and across the island. Dubbed Scotland’s “Dinosaur Isle”, Skye is rich in fossils from the Middle Jurassic.

Many of the Gaelic placenames on Waternish have Norse roots. The Vikings arrived in Waternish in 794 and Waternish, Duirinish, Trotternish and Minginsh make up the four Norse districts north of Cuillins (the mountains located further south). Of these, Waternish is the only one that doesn’t have high cliffs around its coastline. Instead, it has shores which are far easier for landing. Geary is further from the sea than other houses on the island, so families here would likely have been involved in farming rather than fishing.

It is reported that when the Norse arrived in the Hebrides, they devastated the island. By 875, or thereabouts, the Norse had successfully integrated with the native peoples of the Isle of Skye. Their integration explains why there are so many Gaelic and Norse place names and why Norse words are still used in the Gaelic language.