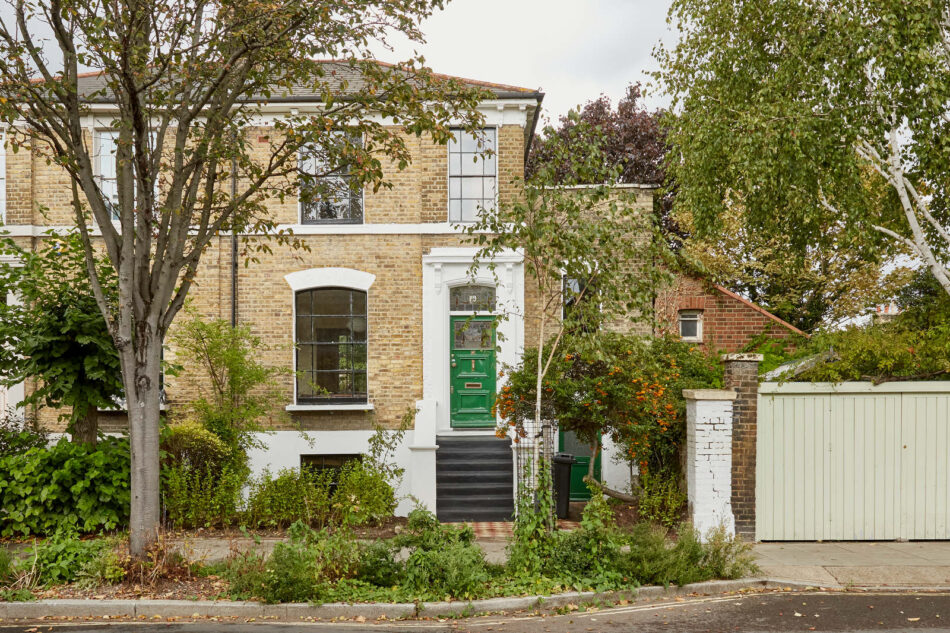 This lovely double-fronted house is found on leafy Middleton Road, a pretty street located seconds from London Fields and Broadway Market. Extending just under 1,600 sq ft, the house comprises two large, open living areas, three bedrooms, and an expansive and verdant garden. Constructed circa 1880, the house has wonderful proportions and large windows, typical of the era.

The house is found in the Graham Road and Mapledene conservation area. Designated in 1997, the area is mostly made up of early-mid 19th-century housing but also a number of Georgian houses further afield, on Dalston Lane. The combination of historical interest and architectural quality merited the conservation order. According to the report of the chief planner at the time: “The predominant character of the area derives from the large scale development in response to the housing demand in the mid-19th century. This has resulted in well-proportioned and pleasant streets of finely designed and built houses… [and] has resulted in an area that is important not just to Hackney, but to London”.

An excellent example of a late 19th-century townhouse, the house was divided into two apartments at one stage and has been lovingly united back into one home by the current owner. The house has a handsome façade, constructed with London stock brick and black-painted window frames.

Entry is on the raised ground floor. A striking green-painted door with ornate stained glass panels opens into the hallway. Original floorboards run throughout the ground floor. On the left is a formal double sitting room, crowned with decorative plasterwork and cornicing. A fireplace with an original marble surround creates a focal point at one side of the room. This is an incredibly bright and sunny room with dual aspect sash windows; at the rear, the window frames green views over the gardens.

Ascending downstairs, past a tongue and groove panelled wall and a shower room, is the kitchen. This room is composed of blue-painted cabinetry and wooden worktops set against lovely terracotta floor tiles. From here, a door opens onto the garden. Behind is a useful boot room, with its own entrance onto the street. An open-plan dining and living room is also on this floor, again with wooden floors and a second marble fireplace surround. A pair of French doors lead into a sunken part of the garden, perfect for a morning coffee.

There are three bedrooms, one currently used as a study. The principal bedroom lies on the top floor and has a large en suite bathroom, with a freestanding, cast-iron bath in the centre of the room, alongside a separate shower.

A magnificent 54 ft garden is found to the rear of the house. This is mostly laid to lawn with planted borders and an apple tree, which is heavy with fruit in the autumn. The garden is surrounded by mature trees and is brilliantly private and peaceful as a result. At the front, the house is set back from the road, behind a small front garden, with further planting and an original chequerboard-tiled entranceway.

Middleton Road is excellently located in central Hackney, just to the west of the popular London Fields and bustling Mare Street and close to the green spaces of Victoria Park and the Regent’s Canal path.

There are many fantastic restaurants locally, notably Lardo on Richmond Road, the renowned Angelina’s on Dalston Lane, Elliot’s and Bright on Mare Street, and Pidgin and Violet on Wilton Way. Weekly markets take place at Victoria Park and Well Street, and Broadway Market has a reputation for some excellent places to eat and drink; it also hosts a food market on Saturdays. The E5 Bakehouse, on the edge of London Fields, is excellent for freshly baked artisan bread and grains, and nearby Netil Market is a thriving hub of restaurants, breweries and coffee roasters.

The house also lies within the catchment area of Outstanding Queensbridge Primary School.

Please note that all areas, measurements and distances given in these particulars are approximate and rounded. The text, photographs and floor plans are for general guidance only. Inigo has not tested any services, appliances or specific fittings — prospective purchasers are advised to inspect the property themselves. All fixtures, fittings and furniture not specifically itemised within these particulars are deemed removable by the vendor.
Middleton Road — London E8
Interested? Let’s talk