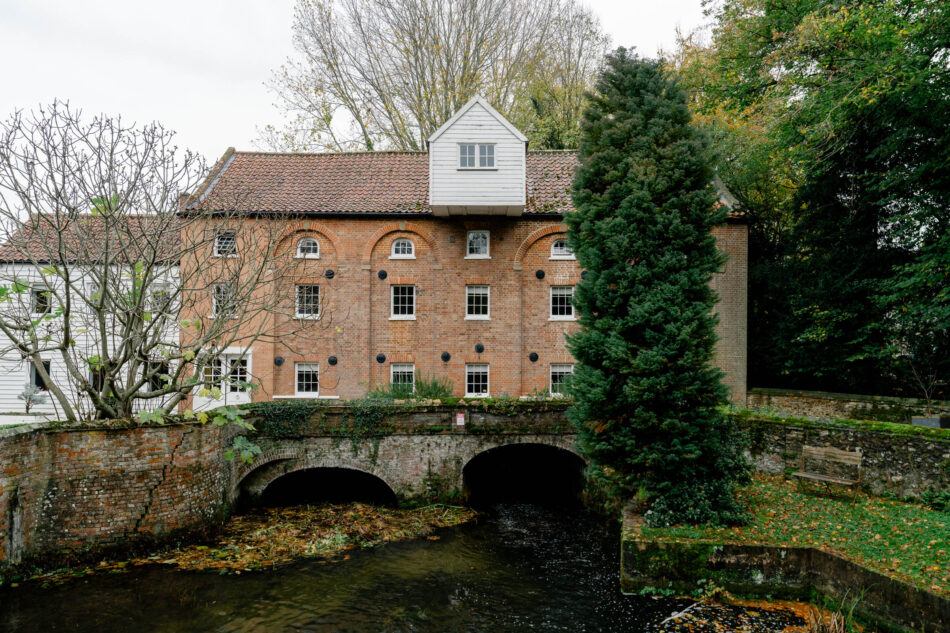 Surrounded by a tranquil garden, where the mill leat of the River Nar cuts through the grass, flows under the house and gathers in a beautiful mill pond

This striking Grade II-listed, six-bedroom former flour mill in Norfolk has been wonderfully converted into a home designed for modern living. The current owners have completely restored the spaces, sensitively retaining historical elements such as the original mill stones and water wheel, as well as rugged timber beams and exposed brickwork. The house is defined by a tranquil atmosphere, which is accentuated by the palette of natural materials used throughout. The mill leat, an offshoot of the River Nar, flows through the wonderful garden, gently passing under the building itself. Set in the rural village of Narborough within the wooded landscape of Norfolk, the house is equally well-connected to both Kings Lynn and Norwich, with their excellent train connections to Cambridge and London.

Narborough became well-known in the 18th century after a law was passed that allowed goods to be transported along the River Nar. This mill is positioned on a significant junction of the river and was built around 1780; straddling the waterway, its façade is characterised by red brickwork with arched detailing, with white metal and timber windows and doorframes. Following the meticulous conversion by the current owners, it has been transformed into an impressive six-bedroom house that deftly incorporates this industrial heritage with modern design. For more information, please see the History section.

The striking pathway to the house is made of York stone, which was reclaimed from the building during its conversion and laid in a diagonal pattern flanked on either side by low box hedges.

Double doors open into a long, lateral hallway where light pours through paned windows and large-format porcelain tiles run underfoot. The original 18th-century mill equipment has been preserved and carefully displayed behind a piece of glass. To the left is the kitchen and dining area, where walls clad in white tiles are complemented by cabinetry in the same shade. This neutral finish ensures that the light drawn in through three large windows is maximised, and that the natural oak accents, such as shelves, a built-in dining table and a storage cabinet, are accentuated. A wood burner warms the room, and sliding doors open to the garden with beautiful views.

At the opposite end of the plan is a generous area currently configured as a workspace, which would also make an excellent dining room. Three glass inserts in the floor frame views of the River Nar below, which flows under the house. Beyond this space is another open area, currently used as a gym, with a white stable door that opens to the front of the house. The dividing wall here is painted in a bright, warm shade of yellow ochre.

From the main hallway, a floating wooden staircase ascends to the first floor. An expansive living room lies here, with wide oak floorboards, brick walls and another wood burner. The space has wonderfully generous proportions, yet retains a sense of warmth and a convivial atmosphere. A small study is tucked at the rear of the room.

All the bedrooms have a natural colour scheme, highlighting the original brick and wooden elements that have been exposed.  Reclaimed antique doors unite the spaces and create continuity through the corridors. The principal bedroom is situated on the second floor and has a mezzanine, formed by the original sack-hoist, which is set into the eaves. The mezzanine is accessed via a ladder and is home to a freestanding roll-top bath; it has a beautiful window overlooking the millpond and the river. The other three bedrooms on this floor are similarly set into the rafters, and are mostly painted white with exposed timber beams. The third bedroom is painted a gentle pink while the fourth has a dark blue section of the roof’s pitch. Two of the bedrooms on the upper floor have en suites, while the other two share a smart shower room.

The house is surrounded by a tranquil garden, defined by the mill leat which cuts through the grass, flows under the house and gathers in a mill pond at the front. The rear garden is surrounded by mature shrubs and trees, both deciduous and evergreen, adding character as the seasons change. A bi-fold door opens from the kitchen to a large patio, which is perfect for outdoor dining. A greenhouse and shed are situated to the left of the garden, surrounded by raised beds for growing fruit and vegetables.

At the front of the house, a small orchard with plum and apple trees has been planted, and rosemary bushes flourish. There is also a roof terrace with views over the pools of the river.

Narborough is a secluded village set in the Norfolk countryside. The surrounding area has great woodland walks and along the northern coastline, which is a 30-minute drive away. Oxburgh Hall, a moated 15th-century manor house, is close by, as are the extensive grounds of the Sandringham Estate.

Recommended pubs in the area include The Ostrich at Castle Acre. West Acre is a pleasant walk up the Nar and is home to The Stag and Duration brewery. There is a range of dining options slightly further afield, including The Old Bank in Snettisham, Sculthorpe Mill, which was voted the best hotel in the east of England by The Sunday Times, and The Gunton Arms, renowned for its contemporary art collection.

Norwich is 36 miles from Narborough, while the 15-minute drive connects to King’s Lynn, where regular trains connect to London King’s Cross in under two hours. Cambridge is 45 miles away and links to the M11.

The origins of the name Narborough are thought to come from the Old English for ‘fortified place at a narrow pass’, in reference to the original settlement built on the banks of the River Nar. The earliest dateable evidence of human activity in Narborough comes from Neolithic tools: axe and arrowheads, decorative scrapers and a laurel leaf point unearthed by archaeologists in the mid-19th century. As time went on, more evidence was unearthed which suggests an increasingly prominent role for Narborough and its surrounding area. Proof of Iron age activity is unusually plentiful, most obviously in the form of Narborough Camp Iran Age Hillfort, the existence of which suggests the village’s beginnings as a strategic outpost in the area.

The Romans, whose battles with Boudica and the Iceni made their conquest of the area famous, sought to build on Narborough’s ancient foundations. West of the line of the old Lynn and Dereham railway, coins, pottery and building materials were discovered in such plenty as to indicate the former presence of a Roman temple and villa.

By the time of the Norman Conquest, Narborough was well established. The Normans significantly developed the settlement’s population, systems of land ownership and productive resources, all of which are detailed in the Domesday Book of 1086. The village’s oldest surviving building dates from this period – All Saints’ Church, in the middle of town.

Narborough grew steadily over the centuries. As industrialisation changed the face of Britain, its location in West Norfolk, with proximity to both the sea and the midlands, saw it become an important trading settlement. In turn, the development of industrial milling transformed the Nar into an important natural resource. Mills sprang up along the river, Narborough Mill included. Built between 1770 and 1780, a Royal Fire Exchange Insurance record dated 1776 is among the earliest mentions of the building. Original equipment remains in the building and includes a 14’ cast iron waterwheel that once drove four sets of stones. The mill was enlarged in 1845 by Charles Tyssen to include an engine house, which was converted into the miller’s residence soon after. The mill last ground flour in 1950 and remains of the few in the country to keep both its complete original set of machinery and waterwheel. Thereafter, it fell into near dereliction until it was stabilised and repaired by Nicholas Carter in 1980s. It was also Grade II listed around this time. In 2012 the building was converted into a residential property and remains a source of considerable historic interest today.