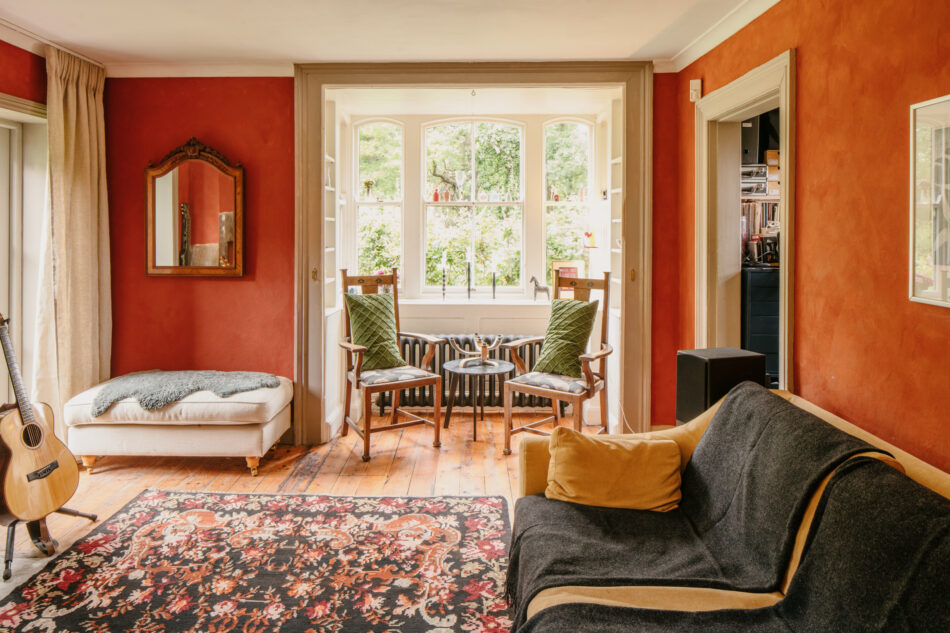 This charming 19th-century three-bedroom house is nestled in the secluded countryside in Tyne and Wear. Unfolding over nearly 1,300 sq ft across three storeys, the former station house is defined by a large number of original windows with views of the bucolic landscapes on all sides. Unusually tall for its rural setting, it was designed for the station master of the now-disused Derwent Valley Railway’s Consett Line, the height allowing for greater visibility over the platform and line below. Generous mature gardens surround the house, with apple trees that grow heavy with fruit in easy reach of the kitchen door.

Built circa 1855, the dignified stock brick façade and slate mansard roof are accented by arched windows with brick architrave details. The current owners have lovingly restored and preserved many of the period features. Historically, Lintz Green was a hamlet in the ancient parish of Chester-le-Street. A quiet rural station on the now-defunct Consett branch of the North Eastern Railway, it was formerly a colliery line carrying passengers, coal, and iron from the industrial villages of County Durham through the picturesque Derwent Valley to the bustling River Tyne. For more information, please see the History section.

A cobbled path leads to the house’s front door, painted in the welcoming ‘Red Earth’ by Farrow and Ball. Entry is to a neat hallway. From here, a staircase leads to the living room, which is flooded with natural light from the tripartite bay window at the front of the plan and a glazed door that opens to the garden. Centred around the native stone fireplace with an inset log burner, the room is painted in the warming ‘Blood Orange’ by Swedish OVOLIN, an egg-oil-tempera paint; original wooden floorboards run underfoot.

The kitchen is at the rear of the plan, where a sensitive extension has opened up the room, creating a large dining area—French doors open to the garden, allowing a through breeze on warmer days. Papered in Marianne by Sandberg Wallpaper with complementary tones of ‘Stiffkey Blue’ and ‘Shadow White’ by Farrow and Ball, the kitchen and dining area is warmed with a wood-burner set in the kitchen fireplace,  making the space perfect for cosy dinner parties.

Stairs in the hall lead to the first floor, where there are two bedrooms and a family bathroom. The largest bedroom is currently used as a music room; the space is painted in soft hues of cream accented with ‘Tribal’ by Lewis and Wood wallpaper. Huge windows allow light to pour in and have beautiful views of the surrounding countryside, and a striking cast-iron and tile fireplace creates a focal point.

The second bedroom is found down the hall with another cast-iron fireplace and a sash window with garden views. A family bathroom is at the rear of the plan.

The second floor is entirely given over to the third bedroom. Formerly two smaller garret rooms, the current owners removed the partition wall to create this airy space with lovely views. Papered in ‘Seaweed’ by Morris and Co, the only hint of the former layout is the pair of identical fireplaces that now sit side by side, like twins, hinting at the house’s past.

Accessed along a track and sitting in generous plot of green space, the house is a rural haven. A kitchen garden and a pond have been established with fruit trees, and cold frames. A dining area under the mature orchard trees is perfect for alfresco dining on warmer evenings. A handsome cobbled path has been laid by the current owners with access to the front door and utility side door.

Lintz Green is a quiet hamlet with the celebrated Derwent Valley Walk on the doorstep. The walk is also the route of the C2C cycle ride, running from Whitehaven, Cumbria, to Tynemouth, Tyne and Wear; it is possible to cycle into the centre of Newcastle almost completely off-road.

Chopwell Woodland Park, Derwenthaugh Countryside Park, and Pontburn Woods (listed in Sunday Times in the top 10 woods in the country) are all located nearby. Hadrian’s Wall is 40-minutes by car, as is the Northumberland Coast AONB; other celebrated national parks are not far, with the Pennine hills 30-minutes and the Lake District an hour and a half by car.

Nearby Rowlands Gill has a variety of local amenities, including a chemist, doctors’ surgery, supermarket and shops. A short drive away is National Trust Gibside, a 600-acre Georgian landscape garden with valley views, a woodland, a Palladian chapel, a stable block, and a grand ruin with the Column to Liberty towering above it.

Newcastle is a 20-minute drive away. It has an excellent choice of restaurants and shops. Sage Gateshead is a concert venue and musical education centre in Gateshead on the south side of the River Tyne. Opened in 2004 and it is part of the Gateshead Quays development, which includes The Baltic Centre for Contemporary Arts, housed in a great converted mill and holds world-class exhibitions and events. The fashionable Quayside area is recommended for evenings out. Tyneside Cinema is a thriving arts hub, and the Hoochie Coochie is regarded as the coolest bar in the area, playing the best in funk, soul and jazz with live artists too.

The Tyne Valley and charming market towns of Hexham and Corbridge are around half an hour and have an array of shops, galleries and markets. Hexham is known for its Bonfire Night, and Corbridge is home to award-winning Forum Books. The historic city of Durham is a half hour’s drive away with the University, Botanic Garden and Oriental Museum. For cricket fans, the Riverside Ground is also around 30mins away by car.

There is a good choice of state and independent day schools. Rowlands Gill Primary School is close, as is Gosforth Academy, a highly regarded senior school. Also in Newcastle, Dame Allan’s offers places from prep through to sixth form for boys and girls, while Royal Grammar School is also considered a very good independent co-ed senior school.

Transport links are excellent. Newcastle International Airport is a 20-minute drive away, with routes to most European cities and holiday destinations, as well as London Heathrow and other southern English airports. Train times from Newcastle station to London Kings Cross are just two hours and 50 minutes, and services run half-hourly.

Opened on the 2nd of December 1867, the Consett Line of the Derwent was a vital line during the industrial revolution, carrying coal from the mines and other products around the country. Three coal mines operated within a mile of the station, and in Litzford, there was a big paper mill.

The railway soon became a means of travel for passengers too. At its peak in 1914, it was carrying over half a million travellers a year, as well as continuing to carry timber, bricks and coal to Newcastle and iron ore to Consett.

After the war, the line carried fewer passengers and more freight. However, the declining popularity of rail travel saw the stations along the line close one by one, with Lintz Green finally shutting in December 1953. The line completely closed in 1963, and the track was dismantled the following year.

The line lay disused for several years but was recently developed by Durham County Council as a park, with viaducts and bridges repaired and the former trackbed redeveloped into an excellent cycle path.