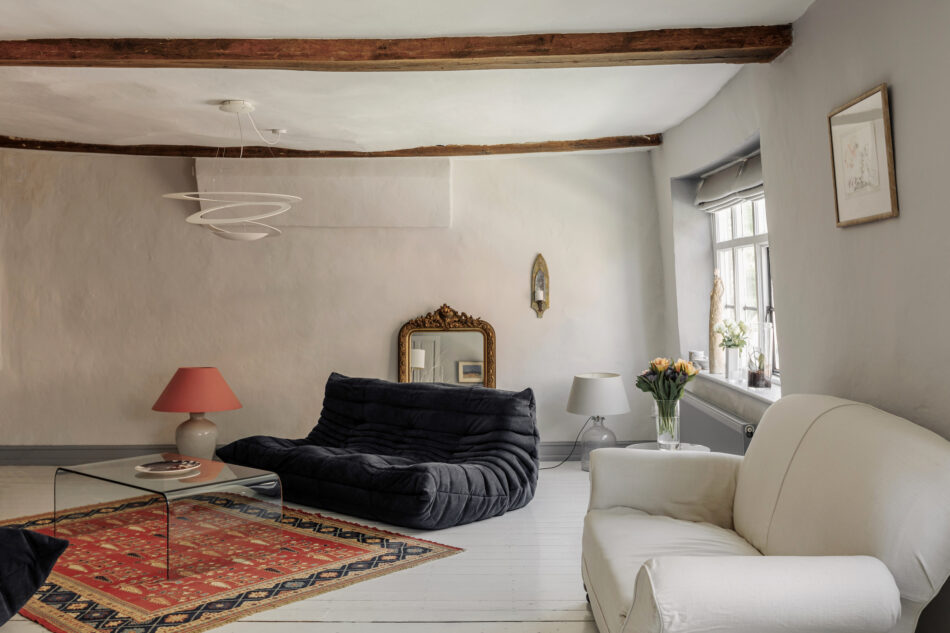 Constructed in the 17th-century, the Grade II*-listed building plays an important part in Norwich's rich history

This charming two-bedroom apartment is located on one of Norwich’s most historically important streets. Occupying the top two floors of a 17th-century timber-framed building and sitting opposite the oldest house in the city, the accommodation extends to just under 1,100 sq ft internally. The home has undergone extensive renovations; rooms are painted in a calming palette of neutral tones, and original features have been retained, including exposed timber beams and hand-blown glazed windows.

Constructed in the 17th-century, the Grade II*-listed building was formerly a pub called The Ship Inn. King Street is one of the longest thoroughfares in Norwich due to its riverside location and, since the Saxon times, has been associated with the fishing industry. As trade from the river grew over time, so did the number of surrounding inns – there were once some 58 public houses on King Street, only one of which survives today.

A finely carved lintel tops the original carriage entry to the house with the words ‘Princes In’. Said to have adorned the Princes Inn of Princes Street in medieval times, it was moved to its current position in the early 19th-century. For more information about the building, please see the History section below.

Entry to the aparment is via a private side access, leading to stairs ascending to a first-floor terrace and the front door. This opens to a hallway, where a calming palette of pale greys has been utilised; white painted floorboards run underfoot, and light floods in from the partially glazed door. At the front of the plan sits the large reception area, a perfect space for living and dining. White painted floors continue, while exposed beams and gently curved lime plaster walls add a wonderful sense of character to the space. Multi-pane wooden-framed windows overlook the historic 12th-century Music House opposite.

Adjacent to the reception area lies a contemporary kitchen, which effortlessly blends with the rest of the interior. Light wooden worktops and painted cabinets complement the space, and original wide floorboards run underfoot. On this floor is the spacious main bathroom, with a walk-in shower and cool slate tiling.

Upstairs, two large bedrooms are situated under the eaves of the house. Wonderfully tranquil and of equal size, they both retain the original beam structure. Each bedroom has a dormer window overlooking the front of the plan with views of life on King Street. Between the bedrooms is the large landing, an unusually spacious area that could be utilised as a reading nook or small study.

Access to the home is via a delightful private terrace, which has been utilised by the current owners with deck chairs and potted plants; a charming sun trap, there is enough space for two to enjoy a morning coffee or alfresco dining in warmer months.

King Street is wonderfully located near the wide array of amenities that Norwich has to offer. The Lanes, a series of medieval streets in the city centre (Norwich is the most complete medieval city in Britain), was recently a winner of The Great British High Street of the Year Award. There are numerous retail, dining and leisure facilities in Norwich, too, and the winner of the Great British Menu, Richard Bainbridge, has opened up a critically acclaimed restaurant, Benedicts. These sit among cultural amenities such as Norwich Castle Museum and Art Gallery, and the Museum of Norwich at the Bridewell.

As part of the ongoing regeneration of the area, the recent incorporation of a footbridge across the River Wensum strategically connects the riverside and city centre.

Norwich train station is also a stone’s throw from King Street, and London Liverpool Street is approximately one hour and 50 minutes direct with regular services. Fantastic connections to nearby Cambridge and the rest of the UK are nearby, as is Norwich International Airport.

Formerly known as Conesford Street, King Street was the main route to Norwich city centre since Saxon times; an industrious area of the city, exports for the river were prepared along the street throughout the Norman and Medieval times. Maps from the mid 16th-century show the area lined with churches, commercial and residential buildings, alongside an Augustine Friary (which by that time was dissolved and given to the 3rd Duke of Norfolk in 1538).

It was not until the late 18th-century that significant development took place around King Street and the river; by this time warehouses for local exports lined the river bank and a number of breweries started to emerge – by the 19th century, the area was integral to the city’s breweing industry, with Morgan’s King Street Old Brewery, the Crown Brewery of Young’s Crawshaw and Young’s on the Riverside being prominent names amongst many malthouses.

There are many fine examples of historic houses along King Street – most notably the Music House (thought to be the oldest surviving house in the city) which was owned by a wealthy family and dates from the 12th-century, and Dragon Hall, a former merchants’ hall dating from the 14th-century, which is now home to the National Centre for Writing.

England’s first UNESCO City of Literature, Norwich is a place of significant literary achievements; Julian of Norwich was an anchoress of St Julian’s Church (which still sits just off King Street, on St Julian’s Alley) and counselled the citizens of Norwich throughout plague and poverty; her book ‘Revelations of Divine Love’ was the first book written in English by a woman – you can visit the Julian Centre, located next to St Julian’s Church, to find out more about this remarkable medieval writer.