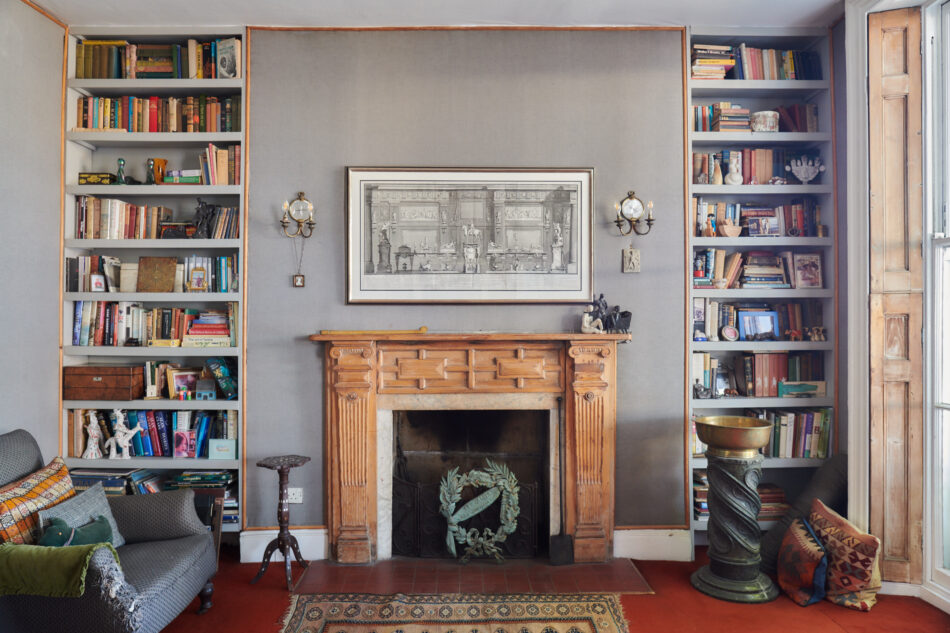 This wonderful four-bedroom Georgian house is situated in the middle of the Kennington conservation area. Built in c1792 as part of a terrace of houses along Kennington Road, a shop front was added in the mid-19th century, which has since been refashioned into a studio space. Extending over 2,700 sq ft, the house unfolds over five storeys with a private east-facing garden and vehicle access at the rear. A well-loved family home for many decades, the current owners have preserved and restored many period features. The house is in a brilliant position, close to all of the excellent pubs, cafés and restaurants of charming Kennington.

Kennington became popular after the construction of Westminster Bridge in 1738 increased access from central London. A flurry of building work ensued, including the construction of this house. Set back from the then newly expanded and improved boulevard-style road, the houses along the street were built to be large and handsome homes. In the mid-19th century, shop fronts replaced the deep front gardens on sections of the terrace.

During the 20th century, a sensitive conversion of the shop front introduced modernist elements seamlessly. The resulting home is a rare composite of nearly three centuries of architectural styles in almost perfect condition, preserving the best details from each era in a harmonious juxtaposition. For more information, please see the History section.

The house is accessed through the powder-blue former shop front. Entry is to an astonishingly expansive space currently used as a studio. Finished in a modern aesthetic in stark contrast to the façade, here, a large skylight allows light to flood the area,. The eye is quickly drawn to the most striking feature, the entirely intact Georgian house front, complete with stairs leading to the original front door. This has a banded architrave, fanlight entrance, sash windows, and lower-ground floor entry. Used in various capacities over the years, this front room is impressive and inspiring. The enormous shop windows complete the light-filled space.

The original 18th-century former front door leads to a hall with half-height stripped wood panelling and arched detailing. A pretty living room with a pair of six-over-six sash windows, complete with shutters, overlooks the studio at the front of the plan. The room centres around the handsome original marble fireplace, which is still in working order, and the half-height panelling continues. Fluted cornice moulding is painted in a complementary tone; a detail echoed in the reclaimed architrave that leads through to the current dining area. Beyond the dining space is the kitchen; dual-aspect, it is a bright space built as a later addition with white painted floorboards and wooden cabinetry.

On the lower-ground floor, a space that was the original kitchen and scullery has been converted into an annexe. This could become self-contained as it has separate private access to the garden. Here, in a bedroom at the front of the plan, the original cast-iron range cooker remains in place, and sash windows look out onto the studio space. There is also a utility area, a bathroom and a small living space at the back of the plan on this floor.

Stairs ascend to the first floor, where the original drawing room has a pair of full-height sash windows and shutters. The room is completed with built-in bookcases on either side of the fireplace. A large family bathroom is at the back of the plan and overlooks the garden.

The second floor is home to two good-sized bedrooms. The current owners extensively renovated the third floor, exposing the original roof structure and converting the space into an expansive bedroom with views of both sides of the plan.

A door in the ground-floor hallway and another on the lower ground open to a charming east-facing garden at the back of the plan. The gently tiered space is planted with mature shrubs and herbaceous borders. A substantial pear tree produces an excellent crop of fruit each year. Gates at the back of the garden lead onto a private passage, which can be used to access the property by car.

Kennington Road is close to many excellent amenities. There is good coffee and cake to be found at Vanilla Black, Sally White and Urban Botanica, and there is a daily vegetable and flower market nearby. The Prince of Wales on Cleaver Square is loved by locals, while a little further afield is the bastion of good pub cuisine, The Canton Arms, as well as the newest outpost of Theo’s Pizzeria. Bonnington Square, home to deli and cafe Italo, is also close at hand.

The Grade II-listed open spaces of Kennington Park are just across the road. There are football, tennis and basketball courts, an outdoor gym, cricket nets and table tennis tables, plus excellent pizza from Collective and fresh bread by Cable Bakery. It is a short walk to the South Bank of the River Thames. The Kennington Triangle has undergone something of an artistic rebirth in recent years; within a short walk are the Newport Street Gallery, The Sunday Painter, Cabinet Gallery, Gasworks, and The City & Guilds London School of Art.

The nearest stations are Kennington and Oval, which are served by both branches of the Northern Line. Vauxhall (Victoria Line and National Rail services towards Waterloo), Lambeth North and Elephant and Castle (Bakerloo Line) are also within easy reach. There are good bus routes into central London from Kennington Road.

Kennington is home to some of the finest Georgian architecture in London. The construction of the Kennington road in 1751 was preceded by the building of Westminster Bridge in 1750. This infrastructure laid the foundations for an explosion of development from the second half of the 18th century onwards.

At the beginning of the century, the area was largely rural. A small village was based around Kennington Common. Due to its geography, it was considered sacred ground and a national assembly site for millennia.

Kennington Road, then known as New Road, was built to link Westminster Bridge Road with Kennington Common; the resulting thoroughfare is so wide that it is almost continental in aspect. In the 19th century, several stretches of the terrace saw handsome shop front added to the houses, this house being one of them.