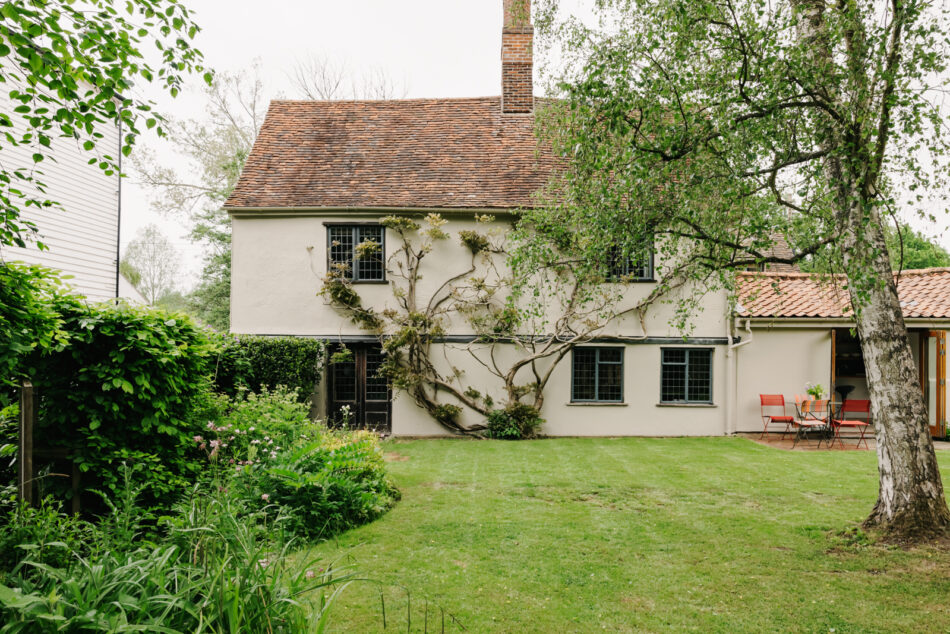 Hulls Mill House is an incredible five-bedroom house that dates in part to the mid-16th century. It lies in a bucolic position next to a mill and millpond, which is inhabited by ducks, moorhens, kingfishers plus the occasional otter, and is well protected by the garden’s own river frontage. Extending over 3,300 sq ft internally, the house is complete with a beautifully planted garden that has a pond of its own, plus an orchard and brick cowshed, now used as a workshop, and an attached cart lodge. The present mill is Victorian, but the Domesday Book records that a mill has stood on the site since 1086. Most recently it was the smallest of the East Anglian Hovis mills, until both the mill and the house were bought and used residentially.

Architectural historian John Walker (1906-95) dated the house to the mid-16th century, suggesting it could have belonged to the owner of the neighbouring mill. Walker theorised that the oldest part of the house was perhaps built against a medieval open hall to form a private parlour wing for the owner, since it was clearly attached to another building at one stage (despite being almost a complete house in itself). He pointed out that these “parlour wing houses” appear in larger homes of the era, such as the wings at Gainsborough Old Hall and Thornbury Castle, forming a private apartment for the owner and their family, away from the day-to-day activities of the rest of the house. He proposed that Hulls Mill House may have been copying this, albeit on a smaller scale.

Second World War artist Eric Ravilious (1903-42) wrote about Hulls Mill House and the surrounding area in a letter to Helen Binyon, in which he refers to it as “[an] extraordinarily attractive place” (from ‘Ravilious in Pictures: A Country Life‘ by James Russell). Ravilious lived in Castle Hedingham and painted locally; his paintings of the area can be found in the Fry Gallery in Saffron Waldron.

Hulls Mill House is one of five houses that form a small, quiet hamlet, centred around the mill and far away from any road noise. A winding road leads to the private driveway, where there is parking for two cars, with further parking spaces beyond a five-bar gate. The front door opens into an entrance hall with a utility room and cloakroom to one side and a guest WC to the other. This leads to the heart of the home via a generous hallway, from which the other rooms radiate. Victorian wooden floorboards run underfoot, paving the way to a raised, tiled area with glazed doors that open onto the garden and flood the room with light.

The dining area lies behind internal mullioned windows and is replete with an exposed brick wall and original beams overhead. The slightly raised kitchen lies beyond, housed in the more recent extension. With stone and wood worktops, blue-painted cabinetry and open wooden shelves, this room also has glazed doors that open into the garden and its bricked dining area.

On the opposite side of the house are two reception rooms, one of which overlooks the nearby river; the other is home to a striking brick inglenook with a herringbone brick hearth and witch marks in the beam above, as well as French doors that open into the garden. There is also a fantastic studio space on this floor, which enjoys beautiful views over the river. Each room has charming windows, some of which are 17th/18th century, others of which are Crittall. There is also an internal window that is thought to date from 1470.

Two staircases ascend upstairs, the main set leading into a library with soaring pitched ceilings that retain their original beams. Oak or elm coffin floorboards run across most of the first floor, some of which are under carpet; others have been exposed. To one side of the library is a generous bathroom with a freestanding bath and a raised walk-in shower, plus Duravit sanitary ware and Vola taps. Two double bedrooms lie on the other side of the library. The main bedroom shares the striking high ceilings of the library, while the second bedroom has a wonderful brick fireplace. A steep staircase leads to another bedroom in the eaves.

The second staircase, which lies in the newest part of the house, leads to a separate part of the plan where there are two further bedrooms; one of these is currently used as a study. There is also a separate shared bathroom.

The wisteria-covered house is nestled amongst a garden and orchard of just over half an acre in size. The orchard is home to Russet apple trees, plum trees and an Indian bean tree and the whole garden has been thoughtfully planted with an array of colourful flowers. The current owners have installed a pond and water feature in part of the garden, with a bridge that crosses over to a charming seating area. There is a terrace on the south side of the house and one further dining area that take advantage of the sun’s changing position.

The garden also includes around 50 meters of river frontage which runs along the mill race and a further stretch downstream of the mill. There are footpaths running in every direction from the house that provide access to beautiful walks.

Hulls Mill House is in a brilliant position, nestled in beautiful countryside yet just 15 minutes from Braintree Station which runs trains to London Liverpool Street Station in around an hour. The centre of Cambridge is only a 50-minute drive from the house; famous for its university and college buildings, it is home to plenty of pubs, shops, parks, a weekly market and the River Cam – perfect for a weekend trip.

The house is a stone’s throw from Molly’s Wood, a 10-acre community nature reserve that hosts an array of events throughout the year. There are ample walks, plenty of which can be accessed directly from the house along the bucolic river and through bluebell-filled woods.

There are also many good pubs and restaurants in the nearby villages; from French bistro-style restaurant The Secret Garden in Sudbury to deli and bar The Foragers’ Retreat in Pebmarsh, as well as local pub The Bell Inn in Castle Hedingham. Seven minutes drive away is the hillside town of Halstead which has numerous supermarkets, a family butcher, a bakery and a good selection of independent shops and coffee houses. Fifteen minutes away is Waitrose in Sudbury, a market town that hosts two market days a week and a monthly farmers’ market. Hedingham Castle has an old Norman keep and some very popular jousting events.

Please note that all areas, measurements and distances given in these particulars are approximate and rounded. The text, photographs and floor plans are for general guidance only. Inigo has not tested any services, appliances or specific fittings — prospective purchasers are advised to inspect the property themselves. All fixtures, fittings and furniture not specifically itemised within these particulars are deemed removable by the vendor.
Hovis Mill Lane — Great Maplestead, Essex
Interested? Let’s talk