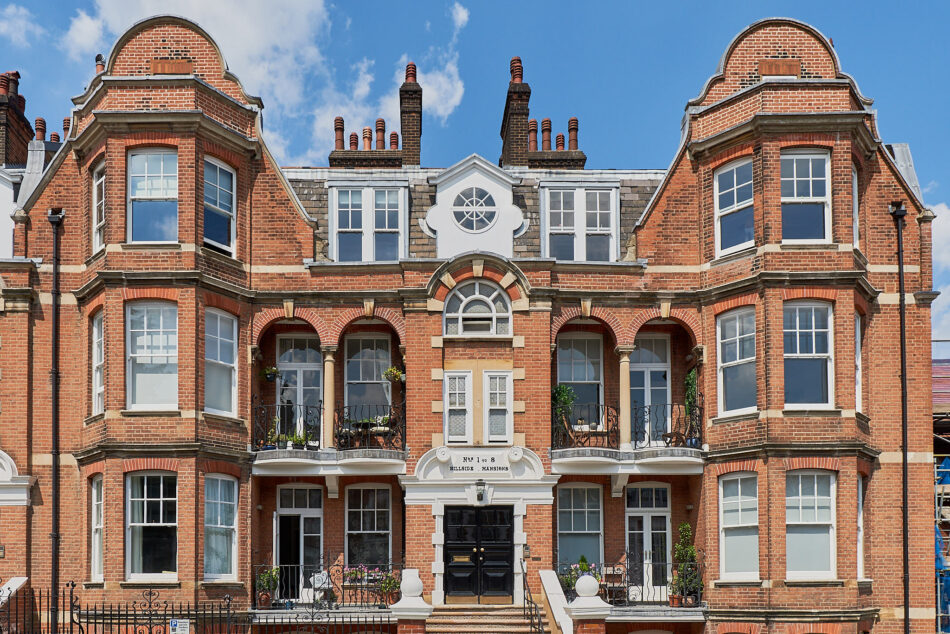 The ceilings have beautiful strapwork detailing and handsome cornicing, while original chimneypieces feature in many of the rooms, as does original architectural ironmongery

Hillside Mansions is a beautifully preserved four-storey, late-Victorian mansion block, built in 1897 and lying in a conservation area. The large, lateral home set within is positioned on the south-facing first floor and exceeds 1,350 sq ft internally. It has a private balcony and the use of immaculate and peaceful communal gardens. Located in an incredibly convenient position within a coveted corner of Highgate, it is moments from Highgate Underground station and both Highgate Wood and Queen’s Wood.

The building retains countless original features that have been sensitively preserved. It is lovingly cared for and has recently undergone extensive refurbishment; this included the restoration of all communal areas and the repointing of all external brickwork with historically accurate lime mortar.

The history of Jacksons Lane, where Hillside Mansions lies, goes back to the Middle Ages when it was a path for pilgrims on their way from the hermitage in Highgate to the Mus Well in Muswell Hill. Later, the lane acquired its name from Joseph B Jackson, an early 19th-century resident of a house called ‘Hillside’ from 1805 to 1815, now sadly long gone.

Hillside Mansions was originally built for ‘well situated’ bachelors. The main rooms at the front of the plan were designated for said bachelor, while the two rear rooms were used as service rooms and manservant’s accommodation. The building has an extraordinary façade from street level; built from red brick with excellent fenestration and a Dutch gable roof. It has a pleasing symmetrical form punctuated with canted bay windows, French windows and wonderful arched recesses, supported by Portland stone columns and beautiful plasterwork, painted finials and quoins at the entrance.

Stone steps inset with decorative Victorian tiles and flanked by cast-iron railings ascend to the raised ground floor communal entrance. Large, glazed wedding doors open into the building’s wide hallway, where chequerboard tiles run underfoot and a grand oak staircase rises to the first floor and the apartment therein. The apartment’s private hallway, with elongated vistas straight ahead and to the left, hints at the unique architectural details within.

Original stained wooden floors feature throughout and entryways to all rooms are punctuated with pedimented mouldings; beautiful fanlights allow an exceptional quality of light to flood in. The ceilings have beautiful strapwork detailing and handsome cornicing, while original chimneypieces feature in many of the rooms, as does original architectural ironmongery. Shades of white are used to great effect throughout, maximising the sense of volume and light; a skilful and subtle mix of ‘Dimity’, ‘Pointing’ and ‘Strong White’ by Farrow & Ball.

At the front of the plan is the living room, a wonderfully light room with a pretty bay window. This is interlinked with the dining room through a separate door, though it can also act as a fourth/occasional bedroom. A particularly pleasing chimneypiece with tiled insert acts as a centrepiece to the room and French windows open to an enclosed balcony with a seating area; perfectly positioned for enjoying the morning sun.

The kitchen is a bright room with a bay window overlooking the garden; this is an intimate space for quiet contemplation and simple kitchen suppers. Cream panelled cabinetry sits harmoniously alongside tiled worktops edged with waxed oak.

The main bedroom has verdant views of the gardens below, as well as plentiful storage and an en suite shower room. Two additional bedrooms are located to the rear of the plan, with a bathroom positioned in between.

Communal gardens lie at the rear of the building, with access via a separate, secure key-operated gate located to one side at Hillside Gardens. The gardens are incredibly peaceful and laid to lawn with mature shrubs and trees all around, ideal for a private picnic on warm summer days.

An array of large green spaces are also close by, including Hampstead Heath and Waterlow Park; while more locally are the ancient Highgate Wood and Queen’s Wood – mere steps away.

Nearby Highgate Village has a wide variety of shops, cafés, pubs and restaurants, including wine shop Bottle, popular pub The Flask, and fruit and veg shop Greens of Highgate. There is also The Grocery Post at the end of the lane itself, which serves good coffee and groceries. There are outstanding schools in the area, including Highgate School, Highgate Primary School, St Michael’s Primary School and Channing.

Transport links are excellent. Hillside Mansions is a one-minute walk from Highgate Underground station (Northern Line) and provides direct access to King’s Cross St Pancras, the West End and the City. Regular buses run from a nearby stop towards Moorgate, Bank and London Bridge, with additional buses running to Camden Town and Tottenham Court Road.

For adventures by road, there are incredibly convenient links to the A1, leading to the M1, A406 and M25.

Please note that all areas, measurements and distances given in these particulars are approximate and rounded. The text, photographs and floor plans are for general guidance only. Inigo has not tested any services, appliances or specific fittings — prospective purchasers are advised to inspect the property themselves. All fixtures, fittings and furniture not specifically itemised within these particulars are deemed removable by the vendor.
Hillside Mansions — London N6
Interested? Let’s talk