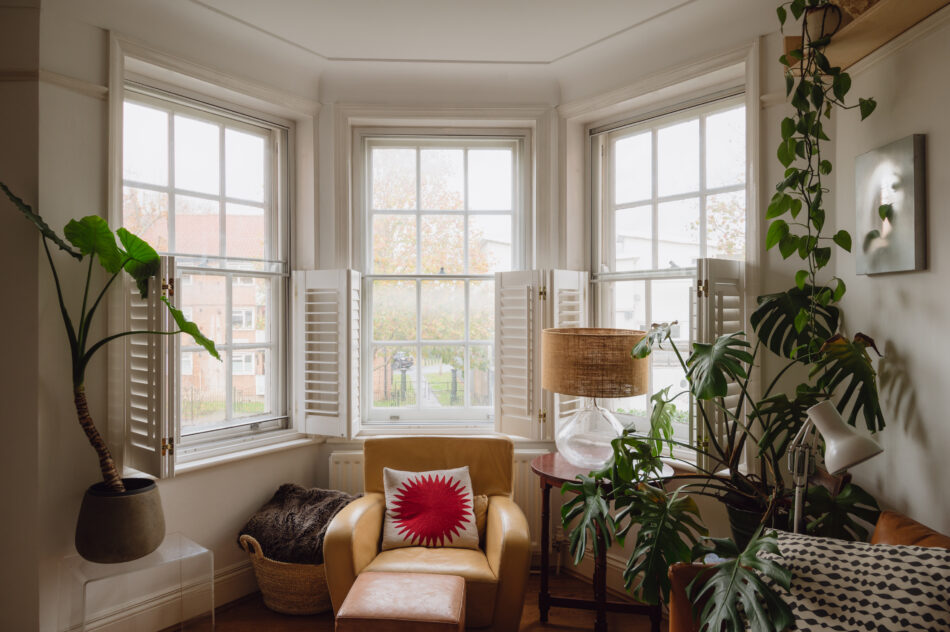 This wonderful three-bedroom apartment is positioned on the first floor of Hazel Court, a 1930s apartment block located in East Dulwich, moments from Peckham Rye Park. The building is characterised by its red brick façade and paned bay windows, typical of 1930s vernacular architecture. Many of the apartment’s most engaging original details, including stripped-back internal doors, wall mouldings and a built-in kitchen pantry have been carefully preserved. Renovated to an exacting standard, the current owners have used a pigment-rich palette and traditional materials to enhance the apartment’s ’30s origins to create a versatile space, perfect for contemporary living.

East Dulwich is arguably the finest example of 19th-century suburbia found within the borough of Southwark. It rapidly transformed from fields and market gardens into housing during the Victorian era between 1865-85; this was in large part due to the development of just two estates. East Dulwich Road, where Hazel Court lies, was developed by one of these: the Bower Smith Estate. Developers were initially attracted by the area’s proximity to London, with the local railways playing an important part in the area’s success in attracting new residents.

Local services were developed concurrently and included the grocery shops of Lordship Lane, St Clement’s Church on Friern Road (replaced after it was war-damaged in 1957) and Dulwich Baths. To this day, there are a remarkable variety of styles within the area; from the simplicity of Nutfield Grove to the flamboyant Victorian Gothic of Barry Road.

An original Dunromin front door opens to a wide communal lobby area with an original staircase and balustrade. Entrance to the apartment is on the first floor, where a long central corridor leads the way to the main living spaces. Painted an atmospheric muted grey, the corridor retains its original wall mouldings and has dark-stained floorboards underfoot.

The living area is positioned at the front of the plan. Here, a triple bay window with paned glass allows natural light to flood into the space. The current owners have gone to tremendous lengths to carefully preserve the original features within, including the fireplace with its Arts and Crafts tiles, intricate ceiling mouldings, found throughout the apartment, and stripped back internal doors. An abundance of shelving frames the fireplace and a cleverly positioned ply shelf has been added above the wall moulding to emphasise the generous ceiling height. Bespoke wooden slatted shutters provide plenty of privacy.

At the rear of the hallway is a newly renovated kitchen, with heritage blue panelled cabinetry, brass fixtures, white herringbone tiles, quartz work surfaces and a double enamel sink. Next to the entrance is an original built-in pantry with glass cabinets, a nod to the building’s 1930s origins.

There are two bedrooms on the same side of the plan as the living area; the main bedroom at the rear mirrors its shape and size. A neutral colour palette has been used to create a calm and serene environment. Bespoke fitted wardrobes run along the rear of the room. The second bedroom, currently configured as a study, makes ingenious use of space with its built-in ply shelving and desk. The walls have been painted a playful salmon pink, which works in wonderful contrast to the rest of the predominantly neutral apartment.

The third bedroom is positioned at the south-facing rear of the plan and echoes the colour palette and ambience of the main bedroom. It is currently configured as a secondary living space but could easily be used as another double bedroom if required. Fitted wardrobes provide ample storage. The south-facing views from this room are especially glorious; extending far over the treetops and gardens beyond.

Also on this side of the plan is a recently fitted contemporary bathroom; Crosswater fixtures feature throughout and monochrome tiles by Otto Tiles run underfoot. In the centre of the room is a striking geometric concrete basin. There is also a separate freestanding shower with Crittall-style doors.

Hazel Court is perfectly positioned for the abundance of grocery shops, cafes, bars and fantastic restaurants within East Dulwich, Dulwich Village and Peckham. Peckham has a number of popular independent restaurants, bars and cafes including Forza Wine, Levan, Artusi and Kudu. Larger establishments such as Frank’s rooftop bar, Peckham Levels and the Bussey Building attract crowds from across the city. Slightly further afield is Lordship Lane, home to a vast number of local favourites including Mons Cheesemongers, Moxon’s Fishmongers, Bon cafe and a wonderful deli, Jones of Brockley.

The green spaces of Peckham Rye Park, Camberwell Cemetery and Dulwich Park are within easy reach, and nearby Dulwich Leisure Centre has a public swimming pool and gym.

For transport, Peckham Rye and East Dulwich railway stations are equidistant and both run direct services to London Bridge; the former in seven minutes and the latter in 15 minutes. Peckham Rye Overground runs services to Shoreditch High Street and Dalston Junction in one direction and Clapham Junction in the other. Connections to the Jubilee Line can be reached at Canada Water in 10 minutes and the Northern Line at Clapham High Street in 11 minutes.

Please note that all areas, measurements and distances given in these particulars are approximate and rounded. The text, photographs and floor plans are for general guidance only. Inigo has not tested any services, appliances or specific fittings — prospective purchasers are advised to inspect the property themselves. All fixtures, fittings and furniture not specifically itemised within these particulars are deemed removable by the vendor.
Hazel Court — East Dulwich Road, London SE22
Interested? Let’s talk