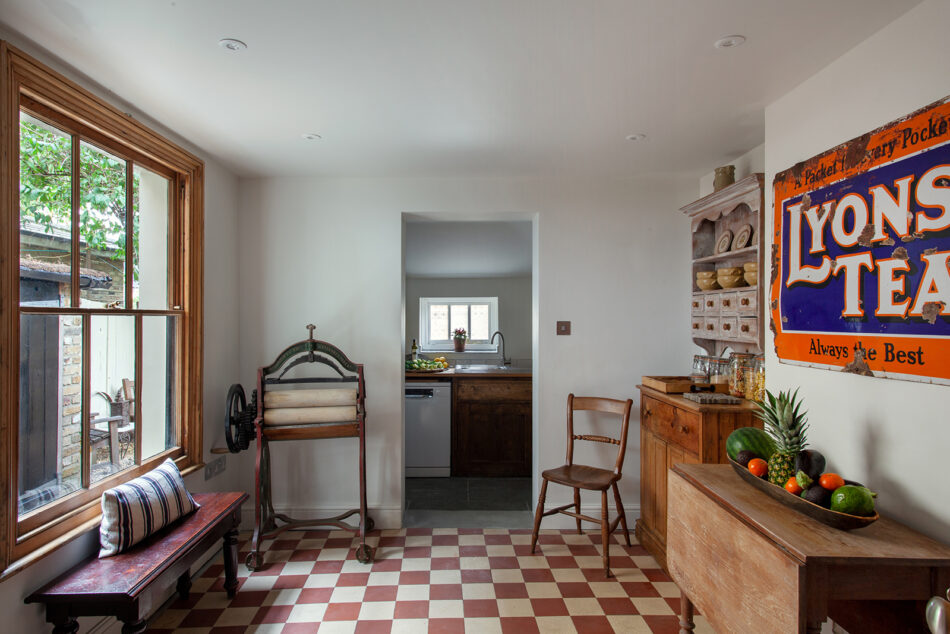 The eye is drawn upwards to the high ceilings, original mouldings, and to the ceiling rose that is particularly striking

Georgian and Victorian architectural elements converge in this five-bedroom house in Tooting, south-west London. Constructed in 1850, the house has remained in the same family for generations and has recently undergone a painstaking restoration with the utmost respect for historical integrity. Spanning three floors and with a tranquil garden and roof terrace, the spacious house is full of character and charm. Its stucco-fronted façade occupies a commanding position a short walk from the shops, cafés and bars of Tooting High Street.

Tooting developed in the mid-19th century as a leafy suburb on the outskirts of London and the border with Surrey. The elegant terraces were built as people sought a life away from the city. This house is one of the few in the area to remain a single residence and has been in the current owner’s family for generations.

The house has been lovingly restored with the building’s history and its structural integrity in mind. This respect for the past is immediately evident from the façade, where stucco detailing has been recently restored with Keim paint, and the decorative window canopies have been dressed with lead by Lock & Co. A bold decision was made to paint the facade in Farrow & Ball Stiff Key Blue that immediate grabs the eye. On the front porch, the original boot scrub remains in situ, and a Victorian  lamppost salvaged from Lambeth  adds a distinctive touch. Throughout the house, original elements have been retained, ranging from original French doors and floorboards to cast-iron fireplace inserts and bricks, repurposed from the farm that used to stand on the site. For more information, please see the History section below.

The house is a blend of Georgian and Victorian architectural styles, seen notably in the high ceilings and wooden floorboards that run throughout. A section of hand-thrown brick in the entrance hall has been exposed and washed with lime render. Next door, an elegant ground-floor living room is painted in Farrow & Ball‘s ‘Vert de Terre’. This chalky green blends with the light that streams through the bay window creating a peaceful atmosphere. The eye is drawn upwards to the high ceilings, original mouldings, and to the ceiling rose that is particularly striking and is dramatically offset by the the exposed filament bulb light fitting.

The dining room nods to a Dutch aesthetic and again uses Farrow & Ball paints. Walls are painted Strong White and the floorboards in Hardwick White in order to offset ‘Stiff Key Blue’, on the cabinetry and skirting. A 1930s mahogany-framed glass door leads directly to the garden and allows the best of the sunlight to pour through.

In contrast, the kitchen still retains its English sensibility. Red and white quarry tiling was laid down in 1904, which lends a quirky and historic character to the room. The original scullery has been adapted to create further preparatory space and is now fitted with wall and floor insulation.

On the first floor the traditional drawing room has a focal point of the iron fireplace with a marble surround. Built-in cabinets on either side add storage and complement the exposed wooden floorboards. Full-length sash windows open to the balcony, making this room perfect for entertaining. It is therefore unsurprising that this room was most recently used as a music room, though it is equally fit for purpose as a striking master bedroom.

The current principal bedroom, situated on the second floor, is an airy room due, in part, to the two sash windows. Built-in storage sits on either side of the iron and limestone fireplace. On the same floor is another bedroom overlooking the garden through a wooden-framed window. It has been decorated with a creative touch with delicate blue walls, and a ceiling painted to look like a swirling sky. A further two bedrooms are situated on the first floor, both fitted with working sandstone fireplaces.

A striking set of double doors, inlaid with red glass, lead to the bathroom. Tiled in white and blue with a yellow floral trim, this room is painted in ‘Mole’s breath’ and ‘Ammonite’, again from Farrow & Ball. It is equipped with a power shower and a wood-panelled cast-iron bath. A further set of double doors, this time fitted with red and blue stained glass, open to a Juliet balcony and add a colourful dappled light to the room. A further WC is situated in the garden and is equipped with the original Victorian cistern.

A gravelled garden with a lean-to bike shed wraps around the rear of the house. Though compact, it is a lovely peaceful space to while away time or sip on a drink on the two-seater bar, thoughtfully added by the current owner. A neighbouring garden was once owned by Peter Barr, known as the Daffodil King, The neighbouring garden was once the home of the renowned horticulturalist Peter Barr, and his influence is still evident in the garden to this day and remains a haven for local wildlife. Bird lovers will particularly appreciate the visits of woodpeckers, yellow wagtails and sparrowhawks and the dawn chorus of all manner of songbirds. The tranquil surroundings can also be enjoyed from the roof terrace. Recently redecked, its vantage point affords views over the trees and towards Battersea.

This house is situated between Garratt Lane and Tooting High Street. Over the past few years, the area has become increasingly trendy with a surge of new openings. Broadway Market and the red-and-white fronted covered Tooting Market are both a few minutes’ walk away and are open daily. There are many excellent restaurants in the vicinity, such as the Parisian-style bistro Bordelaise and the buzzy tapas joint of The Little Taperia, while Mud is the go-to for an Antipodean brunch. For pub options, The Antelope is a fail-safe, as are The Castle and The Selkirk SW17.

The house is perfectly positioned for enjoying the creative vibe of the area. Head to Tooting Bec Lido for a dip in the UK’s largest freshwater pool. The rambling greens of Tooting Common feature sports pitches, Lido, cafes and lakes, and outdoor cinema in the summer. Lively local, The Rose and Crown sits at the edge of the common.

Tooting Broadway station, on the Northern Line, is a 2-minute walk and connects directly to central London, stopping at London Bridge, Bank and the West End, while a change at Stockwell connects to the Victoria Line. The Northern Line also links to lively areas such as Clapham Common.

The house is situated in the heartlands of historical Tooting which is blessed with some of the oldest and most architecturally significant buildings in Wandsworth. Tooting was a small pre-Anglo-Saxon settlement that had evolved next to the Roman Road which connected the City of London with the South Coast. This road is now known as Tooting High Street or the A24. It was also the main thoroughfare for royal processions as they headed towards Merton Abbey and the Royal palace of NonSuch. After the Norman conquest in 1066, the lands of Upper Tooting were given to the Abbey of Bec, hence Tooting Bec, and with this Tooting’s monastic and possibly horticultural connections began. St Anselm from the powerful Bec-Hellouin Abbey in Normandy was appointed Archbishop of Canterbury at around this time too.
The area is also associated with Daniel Defoe (1660-1731), the author of Robinson Crusoe. Street names and local landmarks are all clues to this association. Defoe Chapel, a pedimented classical building built in 1776 still stands on the grounds of the wooden chapel where local folklore suggests he worshipped in secret as a ‘Dissenter”. Around this time there was also a large influx of Huguenot refugees from France. The Huguenots that decided to settle in Tooting were in the main market gardeners and with them came a wealth of highly skilled horticultural knowledge that would not go to waste.
The aluvial soil, adept labour and proximaty to London made Tooting the ideal location for the most prestigious plant nurseries in the country, ready to supply a growing Victorian passion for plants. Notably Robert Parker’s Exotic Nursery, The Rollison’s Nursery and later in 1858 Barr and Sudgen. The Victorian villas along Garratt Lane were the gateway to these fieds of flowers and glasshouses that were renowned for orchids, ferns and ericas amongst others. Examples of these are still kept at the herbarium at RHS Garden Wisley.
In more modern times the area was developed for housing during the Edwardian era and this is the dominant architectural style though some development continued into the 1930’s. Most notably the iconic Art Deco Grade II listed Underground station which was built in 1926 and designed by Charles Holden but the real architectural gem in Tooting’s crown is The Granada Cinema, the Italianate 1930’s exterior gives no clue to the visual feast on entering. The quasi-medieval style interior was created by Russian Theatre designer Theodore Komisarjevsky (1882-1954). It is incorporation of gothic mirrors, chandeliers, ornate plaster work and medieval style paintings. Historic England consider the building ‘the most lavishly decorated interior of any cinema in Britain and among the most lavish in Europe’. It is the only Grade I listed cinema in the UK.
Garratt Lane II — London SW17
Interested? Let’s talk