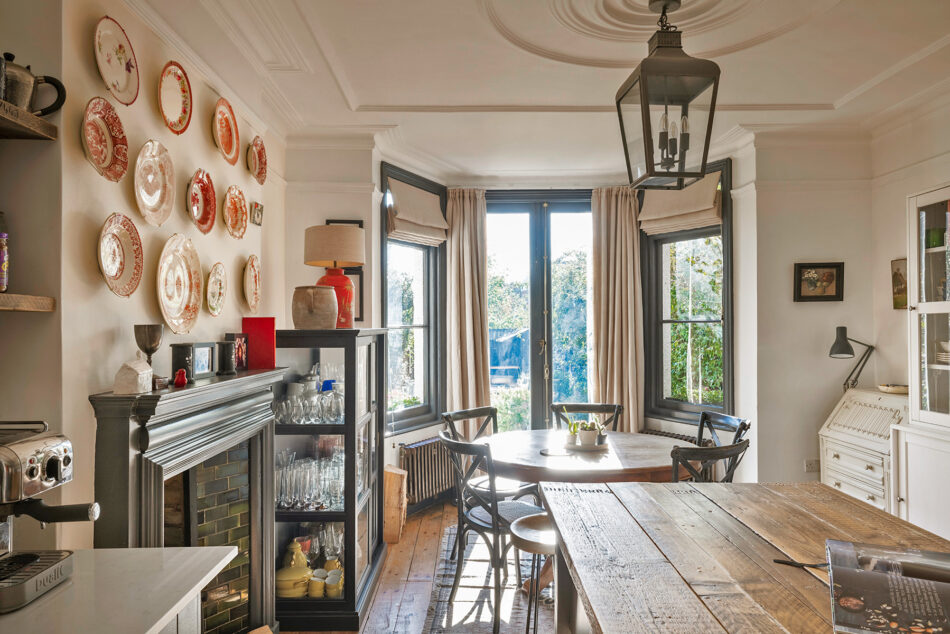 French doors lead out to the private south-westerly gardens, which enjoy sun throughout the course of the day

Pre-dating 1907, this beautifully renovated six-bedroom Edwardian home occupies a sought-after position on Friern Park in North Finchley. The subject of an extensive renovation and extension, the internal living spaces span 2,550 sqft across three storeys, with interiors characterised by generous proportions, high ceilings and original detailing, such as open fireplaces, decorative tiling and wooden floorboards. Private south-west facing gardens extend to the rear. There is easy access to central London, with Woodside Park underground station just a 10-minute walk away.

The house is set on Friern Park, a leafy residential street in North Finchley. Many homes on the road were built on fields purchased in 1852 by the Middlesex Freehold Land Association. The land was divided into plots, and a ballot was held—those who wanted to participate purchased shares in the Association. A winning ticket gave them the right to buy a plot of land in Middlesex at a reasonable price, hence the wealth of handsome Edwardian houses on the street today.

This house is typically Edwardian, the red-brick façade punctuated by two large bay windows. The wood has been stained black, and a red-brick arch accents the front door.

A line of mature hedging provides privacy and seclusion at the front of the house. The entry is via a front footpath with the original decorative tiling and through to the bright, welcoming entrance hall. Two beautifully appointed reception rooms lie on the easterly side at ground level. Here, solid oak floorboards run underfoot, large bay windows invite a soft dappled light, and open fireplaces with the original tile surrounds create a natural focal point.

Bespoke cabinetry defines the kitchen’s layout, with a freestanding central island finished with composite worktops. This creates plenty of space for cooking and food preparation; a butler sink is positioned to one side. A utility space and cloakroom are also positioned on the ground floor.

Ascending the original central staircase, three bedrooms unfold across the first floor. The main bedroom has a large Juliet balcony, an adjoining walk-in wardrobe and a large en suite bathroom with a bath and a walk-in rain shower. Two further bedrooms and a family bathroom are positioned on the southern wing.

On the second floor are three further carefully considered bedrooms, a shower room and a home workspace.

French doors lead out to the private south-westerly gardens, which enjoy the sun throughout the day. Lovingly tended over many years, the gardens are a quiet haven with herbaceous beds of perennial plants and a pizza oven.

A plethora of green spaces exist within the local area. Friary Park and Bethune Park are within walking distance of the house. Highgate Woods and Alexandra Palace are a 20-minute bike ride.

A wide selection of pubs, cafes and restaurants are also within easy walking distance: The Bohemia pub and brewery and Holybella, particular favourites amongst local residents. The highlights of Muswell Hill are also nearby and include an Everyman Cinema and Planet Organic, an organic greengrocer, a butcher/ baker and cafe, The Maid of Muswell pub and a great restaurant, Korto, which serves fantastic tapas and good wine. The Dollis Valley Greenwalk, a footpath connecting Moat Mount Nature Reserve in Mill Hill and Hampstead Heath is also easily reached on foot.

Finchley is popular with families owing to several good local schools: The house sits within catchment for a good selection of schools and nurseries, including The Wren Academy and Cupcakes Nursery.

Transport connections are excellent, with Woodside Park underground station a 10-minute walk and West Finchley around a 15-minute walk. Euston Station can be reached 30 minutes from Woodside Park and Kings Cross St Pancras in 40.

Please note that all areas, measurements and distances given in these particulars are approximate and rounded. The text, photographs and floor plans are for general guidance only. Inigo has not tested any services, appliances or specific fittings — prospective purchasers are advised to inspect the property themselves. All fixtures, fittings and furniture not specifically itemised within these particulars are deemed removable by the vendor.
Friern Park — London N12
Interested? Let’s talk