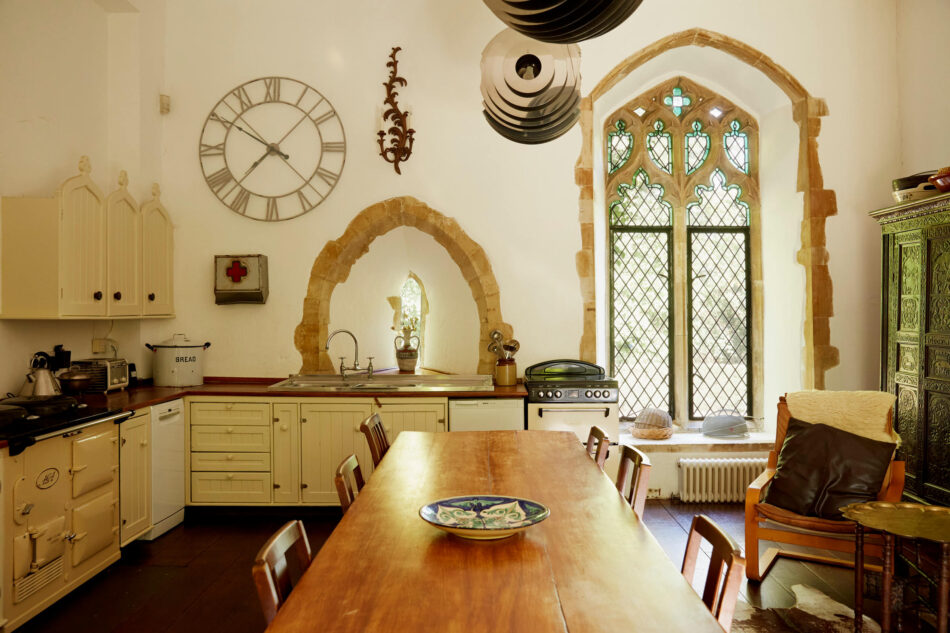 This Grade II*-listed 12th-century former church in Rishangles, Suffolk, was sensitively converted in the 1980s into a wonderful four-bedroom house. The renovation was completed by a local furniture maker who used local timber in a considered way to ensure the house retained its ecclesiastical grandeur, keeping the focus firmly on the original features, such as stained-glass windows, soaring ceilings and exposed wooden beams. Further thoughtful modifications by successive owners mean it is fully equipped for modern living. Nestled in an acre of garden with nearby woodland and fields, the house is secluded yet close to the thriving market towns of Eye and Debenham while readily accessed from London.

Set within the woods, the house is approached down a lane that weaves through ancient trees and opens out to the imposing church. This approach means the house slowly comes into view, gradually revealing the characteristic medieval elements, such as the rugged flint work, red brick and stained-glass tracery windows. A Gothic portal with an immense wooden front door defines the façade. For more information, please see the History section.

A Gothic portal, replete with a tri-partite tracery window, and an architrave adorned with flowers, leads directly into the church tower. A wooden ladder that was once used to ascend the church is set to the side. A portal surrounds the front door and still bears the marks made by those heading to the Crusades. This door leads to the former nave, now a spacious entrance hall defined by its whitewashed walls, wooden panelling and impressive staircase.

The central living space occupies the area that used to be the chancel. This is an impressive space with soaring ceiling heights, flooded with light drawn in from the enormous stained-glass windows. A complete overhaul of the church roof has seen it equipped with strip lighting and fittings for chandeliers. A large brick fireplace has a large wood burner in its hearth, warming the room in colder months. A balcony, in place of the original rood screen, currently functions as a study. Accessed via a narrow stone stairwell, formerly the rood stair, this is the perfect vantage point over the room.

Equally imposing proportions define the kitchen. Extensive cream cabinetry is topped by wooden worksurfaces that extend the width of the church, creating plenty of space for cooking; wall cabinets are finished with arched doors, referencing the building’s gothic origins. A 1940s Aga, converted to work with electricity, is the focal point of the room, and there is a further two-oven gas oven. A large fireplace with a rugged brickwork hearth and an Aga wood burner makes the kitchen a welcoming space to gather.

The main bedroom occupies the north nave of the church. This room is dominated by another full-length tracery window, this one with purple stained glass. The second bedroom has a sloped ceiling and exposed beams restored to gloss wood. Here, a sunken bath sits on a raised wooden platform and forms part of a suite with a WC and a sink; a third bedroom is nestled in the eaves. The fourth and final bedroom has underfloor heating. From here, there is access to the tower via a dramatic glass spiral stairway. Following an extensive restoration project approved by English Heritage, the tower now constitutes a library space, from where a staircase ascends to a terrace.

A large family bathroom on the first floor is clad in the same panelling consistent throughout the entire house.

Set within dense woodland, the house and its garden exude tranquillity. A spacious patio provides the perfect space for entertaining. Mature quince, apple, plum and pear trees grow heavy with fruit in the summer and autumn, while medlar, horse chestnut and holly display their changing hues throughout the seasons. The well-tended herb garden is planted with sage, mint, thyme, lavender, rosemary and bay. A pathway leads around the house’s perimeter, and wisteria, roses, and hydrangeas climb up the ancient walls of the church.

Church Lane is situated in Rishangles, a sleepy village between the two larger settlements of Eye and Debenham. Eye is a bustling market town with a regular farmer’s market. Shops include two butchers, a bakery and an array of fantastic antique stores. Debenham is well-known for its characterful pretty High Street and has an excellent grocer, butcher, florist and several thriving coffee shops, including the popular River Green Café and deli, as well as a local brewery. The Red Lion recently reopened as a restaurant and the Woolpack pub, an old-fashioned, licenced beer house, is also on the High Street. Debenham also has an ironmonger, a well-stocked shop, a post office, and a newsagent.

The Station and Watson and Walpole are both popular restaurants in nearby Framlingham. The Leaping Hare at Wyken is both a celebrated restaurant and vineyard. A celebrated Spanish delicatessen, Emmett’s, can be found nearby Peasenhall and an excellent fishmonger in Orford, Pinney’s of Orford. For south Indian cuisine, Chennai Dhosa in Ipswich offers further choice.

The arts are similarly well served in the area. Snape Maltings and Leiston Abbey host celebrated musical concerts that draw many international musicians.

There are also areas of outstanding natural beauty nearby, with nature reserves at Minsmere and Redgrave and Lopham Fenns. The stunning Suffolk coastline with vast tracts of reedbeds, heath and beach is around half an hour by car. Likewise, Sutton Hoo, one of the most important archaeological discoveries of the 20th century, is close (also on the banks of the River Deben, which gives Debenham its name).

Schools in the area are very good. Thordon Primary School is a mere three minutes’ drive from the house, while Debenham has the Sir Robert Hitcham Primary School and Nursery and an excellent secondary school, Debenham High School. Stradbroke High School is well regarded, as is Thomas Mills High School in Framlingham. Framlingham College offers co-ed independent education for children ages three to 18.

The nearest train station is in Stowmarket, a 25-minute drive, with services to London Liverpool Street in around 80 minutes. Diss and Ipswich, a 20- and 30-minute drive away respectively, provide frequent connections to London, as well as to Cambridge and Norwich.

The Domesday book of 1086 cites Rishangles as ‘Risangra’, meaning ‘brushwood slope’. The first reference to the church’s dedication is in 1240, to St Margaret of Antioch, the patron saint of women in childbirth and the dying.

Restoration of the structure was undertaken in the Victorian era and saw the refacing of the external walls, the addition of new buttresses and the replacement of various windows.