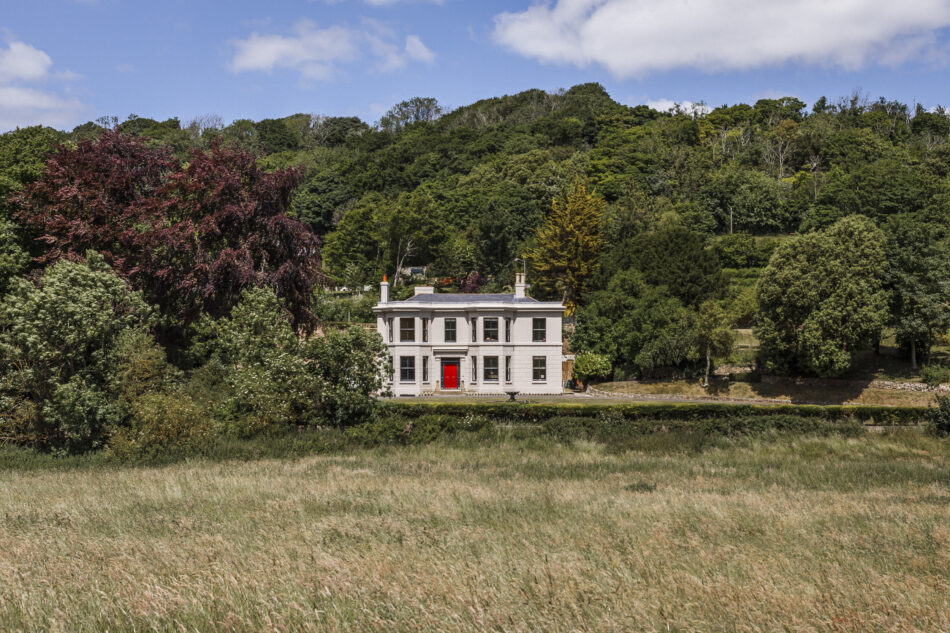 Nestled within the Kent Downs Area of Outstanding Natural Beauty, with expansive views from the front of the house over nearby parkland

This glorious nine-bedroom house – extending over 6,000 sq ft – is nestled within the Kent Downs Area of Outstanding Natural Beauty, with expansive views from the front of the house over nearby parkland. The house is completely rural despite lying between the nearby towns of Folkestone and Dover, as well as the county’s attractive coastline. Dating from the early 17th century, the house was extended in the Victorian era. With a rich and varied history, the house has layers of unique original features, which have been preserved and celebrated by the current owners in their own restoration. It is surrounded by a terraced garden and a beautiful, tall old wall, which delineates a sun terrace, as well as ample space for parking for multiple cars.

Chilverton Elms is within the parish of Hougham, located in the eponymous Elms Vale between the parish’s two hilltop villages, Church Hougham and West Hougham. The current house is based around an earlier house built in the 17th century by a rich Huguenot named Peter Napeau, who fled from France. Napeau died in 1658 and is buried in the 11th-century St. Laurence’s Church in Church Hougham. His large and luxurious house, known as The Elmes, would have sat within the boundaries of the manor’s lands, and his family continued to live there for several generations, probably building a new house on the land circa 1677.

The house underwent significant changes in the Georgian and Victorian periods. The principal rooms and the main façade of the current house are the remaining part of a significant mid-to-late Victorian addition. However, the back of the house, which may incorporate within it elements of Napeau’s original house, seems to date from the late-Georgian or early-Victorian period. The current owners have done much to restore the house during their ownership, replacing the whole of the roof and carrying out a specialist heritage restoration of the exterior, as well as other behind-the-scenes and cosmetic changes. For more information, please see the History section.

Entry is through double doors, which sit in the centre of a balanced, symmetrical façade, and into a wide hallway, with a black and white checkerboard-painted wooden floor. A music room is found to one side, and a formal sitting room to the other. Both rooms have incredible soaring ceilings, original sash windows and shutters, intricate decorative plasterwork framing the ceilings, and striking marble fireplace surrounds. They are both also south-facing, and are bathed in light throughout the day as a result. The floor in the music room is an attractive parquet. Beyond the formal sitting room is a useful study space, and a guest WC.

Towards the rear of the house is a generous dining area and, beyond, a kitchen. The kitchen is composed of shaker-style cabinetry, an Aga and panelling on the ceiling. A door opens from here onto a newly constructed decked sun terrace, which enjoys the evening sun and is perfect for dining outdoors due to the fact that it is wonderfully sheltered by the old wall.

Also on this floor is a useful utility space, a second WC and a set of stairs that descend into a basement which extends underneath the Victorian extension, with old flagstones lining the floor. This space is perfect for a games room and additional storage. Space for a bread oven in conjunction with the original meat hooks signify that this might have been the original kitchen.

A painted staircase leads to the first floor’s bedrooms. The principal bedroom is found at the front of the house, enjoying the same far-reaching views across rolling fields through its tall sash windows, its own dressing room, and en suite beyond. There is another generous bedroom at the front of the house, this time with a double aspect, and as a result, is flooded in light.

A family bathroom serves this floor and is found in the centre of the plan, with three further bedrooms positioned around it; one has a recently decorated, panelled en suite bathroom, which sits at the top of a later Victorian extension. The top floor is home to four further bedrooms, one of which is currently being used as another snug but could also be an office.

A path leads from the front door, past a working water feature, and up a winding path to the terraced lawns. The Kent soil – similar in composition to the Champagne region in France – provides a home for two grape vines. The whole garden are framed by old brick retaining walls, which give the feeling of a walled garden.

Another terrace might have been an old kitchen garden since some herbs still grow there. There are two apple trees, an old greenhouse and the whole garden could be kept laid to lawn, or could provide a wonderful place to grow food or more flowers. It is even possible to see Dover Castle from the end of the garden in winter when the leaves have fallen from the trees. Adjacent to the house is also a useful log store room.

The house is incredibly well-positioned, wonderfully rural yet close to Dover, a coastal town full of hidden gems which is about to enjoy a period of investment and further improvement. Tucked behind the bombed-out ruins of the Norman St James’ Church,  the 700-year-old White Horse pub – an alehouse since 1574 – serves delicious homemade food. Further up the valley is The Breakwater Brewery and Taproom, where award-winning beers are brewed using the Dour’s clear chalk-filtered water. There is also the brilliant Vinoteq wine bar with excellent basement jazz nights.

For the active, there is Dover Sea Sports Centre, which offers the opportunity for a wide range of activities from sea swimming to sailing, kayaking, rowing and more.

Dover is surrounded by some of England’s most awe-inspiring and famous countryside. For ramblers, The Kent Downs AONB has some of the best walking country in the South East, the most iconic of which is atop the breathtaking White Cliffs of Dover, offering views across the shipping lanes of the English Channel to the coast of France, where, on a clear day, the individual buildings in Calais can be seen with the naked eye.

There is a wide range of fantastic schooling locally, including the town’s two grammar schools (both with large intakes), the independent Dover College (set among the ruins of Dover Priory), a wide range of well-rated primary schools, and Northbourne Park prep school with its focus on languages and the outdoors.

Other popular towns, such as Folkestone and Deal, are also within easy reach. Folkestone is known for its rich art scene from the Triennial, the Folkestone Fringe, as well as a wealth of galleries and exhibition spaces, such as in the Creative Quarter and at the Quarterhouse.

There is also an incredible food scene there, with Michelin star holder Hide and Fox serving Modern British dishes with an emphasis on seasonal ingredients and Rocksalt and Little Rock preparing the freshest fish possible, caught from local day boats. The Folkestone Harbour Arm is home to a variety of independent shops and food kiosks, as well as live music and an outdoor cinema in the summer. Regular farmers’ markets are held in Sandgate Village Hall, as well as at Folkestone West station.

Deal is home to many brilliant eateries, such as The Rose Hotel, known for its excellent bar and restaurant, as is the Frog & Scot. Real Deal Roasters is a renowned coffee supplier and shop, Arno & Co, the preferred grocer and Merchant of Relish, the favoured deli. The Black Pig butchers and Jenkins & Sons fishmongers are also both noteworthy.

A date stone that appears to read ‘1677 RHE’, which may once have been on the front of the house, was recently discovered, embedded back-to-front in a retaining wall in the garden. The initials do not seem to correspond with any of the known owners of the house and may be those of a builder employed by one of Napeau’s descendants to carry out works to the house.

The house became the manor house for the parish in the 18th century. Otherwise though few records seem to survive of the owners of the house until the time the Evanson family bought the estate in the 1880s. The Evanson family owned it for a century, and their family tomb spanning multiple generations can still be seen in the churchyard in Church Hougham.

In the early twentieth century, the family may have run the house as a school. A photograph survives from this period captioned: ‘HRH The Duke of Cambridge and Staff, at Chilverton Elms, after a Review’. The photo suggests a potential relationship with the military during this time, perhaps around the First World War, when troops are known to have carried out parades at nearby Farthingloe.

After the Second World War, a large part of the Victorian addition was demolished, perhaps due to post-war economic hardship, and the house was split into two ‘wings’. In the 1980s, the Evansons finally decided to sell.

As with so many great houses, the land of the Manor of Hougham has been divided over many generations, but the house still faces onto a large part of the former estate, known to this day as The Park. The former estate farm, Elms Farm, is nearby and continues to manage much of the land in the valley. As a result, the feeling is still that of a great house sitting in the centre of its estate.