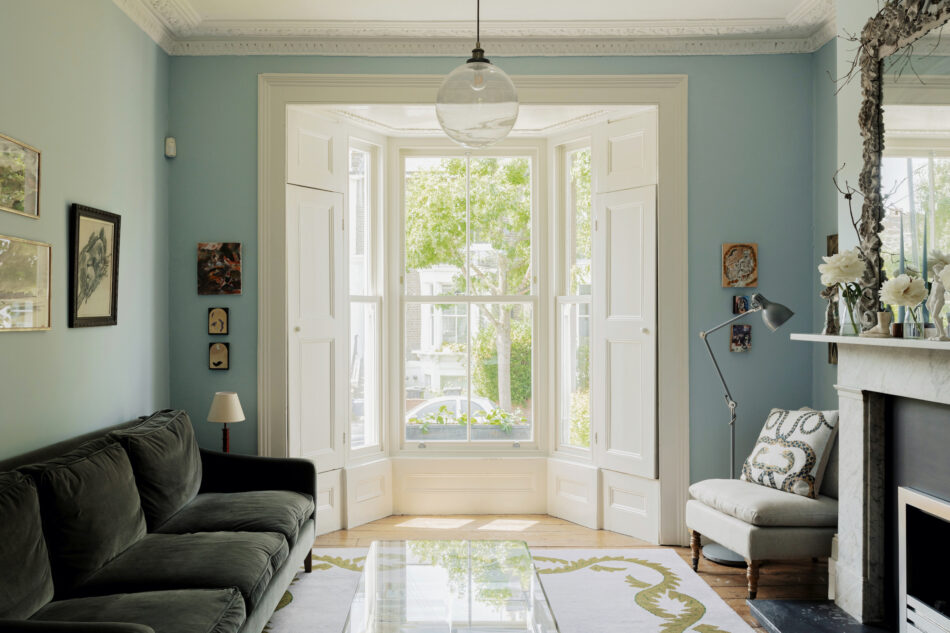 A colourful celebration of Victorian features with a considered contemporary twist

This wonderful two-bedroom maisonette sits on Edenbridge Road, a charming street lined with late Victorian houses. A stone’s throw from the green spaces of Well Street Common and Victoria Park, it is in the heart of the Victoria Park Conservation Area. Built in the closing decades of the 19th century, the maisonette retains many period features, including cornicing and original windows. Sensitively renovated under the current ownership, it has been updated for modern living with a considered colour and material palette; the result is bright, elegant and thoughtfully executed.

Edenbridge Road runs parallel to the open spaces of Well Street Common, in a sought-after corner of Victoria Park Village. The house sits in the middle of the tree-lined terrace, set back from the street, behind a low wall and iron railings with a façade of London Stock brick and white stucco dressings. Steps lead up to the entrance of the maisonette, the raised-ground floor.

The maisonette has its own front door, and entry is to a wide hallway, where intricate, fine classical plasterwork has been sensitively restored to reveal subtle layers of paintwork, creating a wonderful patina.

At the front of the house is the bipartite sitting and dining room, divided by wedding doors that can be open or closed, as required. Dual-aspect when the doors are open, the rooms are illuminated by a large bay window overlooking the street and a sash window looking out to the garden. Many original features have been retained, including the cornicing and roses that decorate the ceiling, the high skirting, original wooden floorboards and the shutters on the bay window. The reception is painted a calming sky blue and has a warming gas fire. The dining room is finished in a neutral, earthy, plaster pink. Wooden floorboards run throughout both rooms.

At the rear of the plan, a bespoke kitchen has been newly installed. Cabinetry, topped with Carrara marble worktops, is finished in wonderful charleston grey and houses appliances by Siemens and Fisher and Paykel. A large pantry cupboard cleverly conceals the clutter of the kitchen.

The main bedroom is at the front of the plan and is lit by two large sash windows. Bespoke fitted cupboards run along the left-hand side of the room, while open shelving and a pair of chests of drawers are built neatly into alcoves.

Adjacent is a second bedroom, currently a nursery, it could easily accommodate a double bed. It is finished in a Lamp Room Grey by Farrow & Ball with whitewashed floorboards. Space is maximised by bespoke cupboards built into the chimney alcoves, and it has fantastic views over Well Street Common.

The large family bathroom is on the half-landing, between the raised-ground and first floors. The relaxing and tranquil room is painted a warm powder pink, with hand-cut tiles by the Mosaic Factory on the bottom half of the walls. Lefroy Brooks hardware has been used throughout, and there is a Drummonds bath in the corner. A separate shower is enclosed by glazing and has the same hand-cut tiles. Built-in cabinetry is and made from reclaimed wood from Retrouvius and hides appliances behind a curtain.

On the top floor landing, a fitted ladder with a desk hidden behind leads to a large attic with Velux windows.

Well Street Common is a 20-second walk from the house. An extension of Victoria Park, it provides 213 acres of parkland and has an impressive selection of plane and chestnut trees.

Edenbridge Road is a quiet and peaceful street in the heart of Hackney village, a short walk from all the offerings of Lauriston road. The area is well known for its array of independent shops and restaurants, including the popular coffee shop Pophams, as well as restaurants Peg and Behind, along with the numerous other delis, butchers, bakers, fishmongers and wine merchants.

Victoria Park Village is one of east London’s most desirable neighbourhoods. There is a wonderful array of organic cafes, shops and delis, including Ginger Pig butchers, The Deli Downstairs, Jonathan Norris fishmongers, Bottle Apostle wine merchants and Gail’s bakery. In addition, there are numerous excellent pubs, including the Lauriston, the Empress and the Royal Inn on the Park. In the warmer months, the village comes alive, attracting residents from across east London to the park’s green open spaces and the vast array of picnic provisions.

Please note that all areas, measurements and distances given in these particulars are approximate and rounded. The text, photographs and floor plans are for general guidance only. Inigo has not tested any services, appliances or specific fittings — prospective purchasers are advised to inspect the property themselves. All fixtures, fittings and furniture not specifically itemised within these particulars are deemed removable by the vendor.
Edenbridge Road — London E9
Interested? Let’s talk