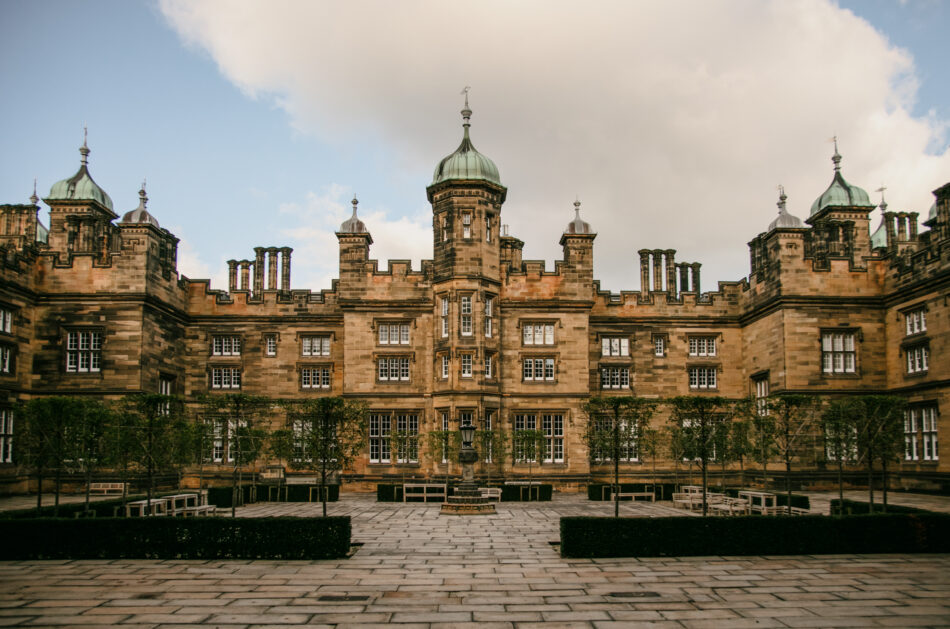 Occupying three floors of a historically significant Category A-listed building in Edinburgh, this wonderful two-bedroom apartment unfolds across 1,092 sq ft. Having started life as a school, Donaldson Drive underwent an extensive restoration and conversion into a residential building in 2020; this apartment was built in what was originally the ‘Boys Staircase’. Extensive landscaped gardens, a club room and a chapel room alongside private underground parking are all available for residents’ use. Nestled in 16 acres of parkland, the apartment and its surroundings have sweeping views across Edinburgh and the Pentland Hills. The apartment is very well connected, with both Haymarket and the West End a short walk away.

Recognised as one of the most important landmark buildings in the Edinburgh World Heritage Area, Donaldson’s School was founded in 1851. Arranged around a quadrangle, the building was designed by architect William Henry Playfair, who modelled it on an Elizabethan palace. Stone was sourced from the nearby Binny Quarry, and local craftsmen were tasked with creating intricate stonework on the façade. Octagonal turrets adorn all sides of the building, with feature windows and domed copper roofs (which have oxidised over time to give them their distinctive green colour).

Queen Victoria opened the building in a commemorative ceremony and is reputed to have said that the building was more impressive than many of her own palaces. Today, Donaldson’s is one of the most recognised buildings in the city, converted to exacting standards; the building has been preserved for future generations, with history respected and modernity embraced. For more information, please see the History section below.

Built in what was originally the ‘Boys Staircase’, adjacent to the ‘Boys Corridor’, entry to the apartment is via a hallway on the lower-ground floor. Stairs ascend to the wonderfully bright, double-height reception room and kitchen, around which the apartment is oriented. Here, light floods through high triple windows, which have been fitted with wooden plantation shutters. Solid oak flooring runs underfoot, and the interiors have been finished in neutral shades of white. A contemporary open kitchen finished in grey has Corian stone worktops.

Downstairs, on the lower-ground floor, is the large primary bedroom suite. With a sense of being tucked away, this room has plenty of bespoke built-in storage and an en suite bathroom with a shower, a vanity and a WC. It is lit by a large shuttered window and has voluminous ceiling heights. On this floor is a useful utility room and a separate WC.

The top floor of the apartment is home to a light-flooded mezzanine bedroom. Lit by dual-aspect windows overlooking the quadrangle, the room is complemented by original cornicing. A large bathroom sits adjacent, with a bath, an overhead shower, a vanity and a WC – the space has been finished with soothing grey porcelain tiles and a calming slate floor in a similar shade.

The main building is set within 16 acres of beautifully manicured parkland. With formal gardens, sweeping lawns and long visas, the greenspaces have been separated into several areas; an arboretum (inspired by the Victorian love of orchards and forests and home to several specimen trees), morning and afternoon terraces (surrounded by clipped orchards and fruit trees), a formal parterre, and the park, which is home to sweeping lawns and was historically known as ‘the field’.

Donaldson Drive is incredibly well-positioned within walking distance of the highlights of Edinburgh City Centre. George Street, Multrees Walk and Princes Street, a selection of the city’s best shopping streets, are all very close, while an array of cultural delights are a short walk. The Water of Leith is very close by, and just the other side of it are the Scottish Galleries of Modern Art (one and two). Edinburgh Castle, the Palace of Holyrood House, Calton Hill and the Scottish National Gallery are all nearby. The city’s four Michelin-starred restaurants are easily reached on foot, as are the popular eateries Timberyard, The Little Chartroom, Edinburgh Food Studio, and Scran and Scallie in neighbouring Stockbridge.

The area has a rich picking of independent schools and maintained, including St George’s School, Erksine Stewart’s Melville Schools, Edinburgh Academy and Fettes.

Donaldson Drive is perfectly connected with Haymarket, a seven-minute walk away, providing access to Glasgow Queen Street in 47 minutes, Manchester Piccadilly in 192 minutes and London Kings Cross in 264 minutes. Edinburgh Waverley is a 10-minute drive away and has further connections to the North and South. Edinburgh Airport is 25 minutes from Donaldson Drive, with local and international flight options.

Donaldson’s School was founded by its benefactor, Sir James Donaldson. A publishing magnate from Edinburgh, Donaldson bequeathed most of his estate to build a school for orphans, stipulating that it should accommodate 200 boys and 200 girls, with bursaries for poor children.

A nationwide competition ensued upon Donaldson’s death, and waves of architects submitted plans for the School. After five years, many applicants and several re-designs, renowned Edinburgh Architect William Henry Playfair was granted the commission to design the School. Widely acknowledged for Edinburgh’s distinctive architectural style, Playfair is responsible for a succession of notable public buildings in the city, including the Edinburgh National Gallery, Dugald Stewart Monument, City Observatory, Regents Terrace and several academic institutions.

Deaf children were encouraged to apply for the School, and by 1938, the School had merged with the Royal Institute for Deaf and Dumb, taking on exclusively deaf children.

After more than 150 years serving as both a school and charity, Donaldson’s finally closed its doors to enrolments as the Trust looked for a smaller, more practical building. The building was purchased in 2015 and underwent an extensive six-year restoration project, converting the site into residential accommodation.