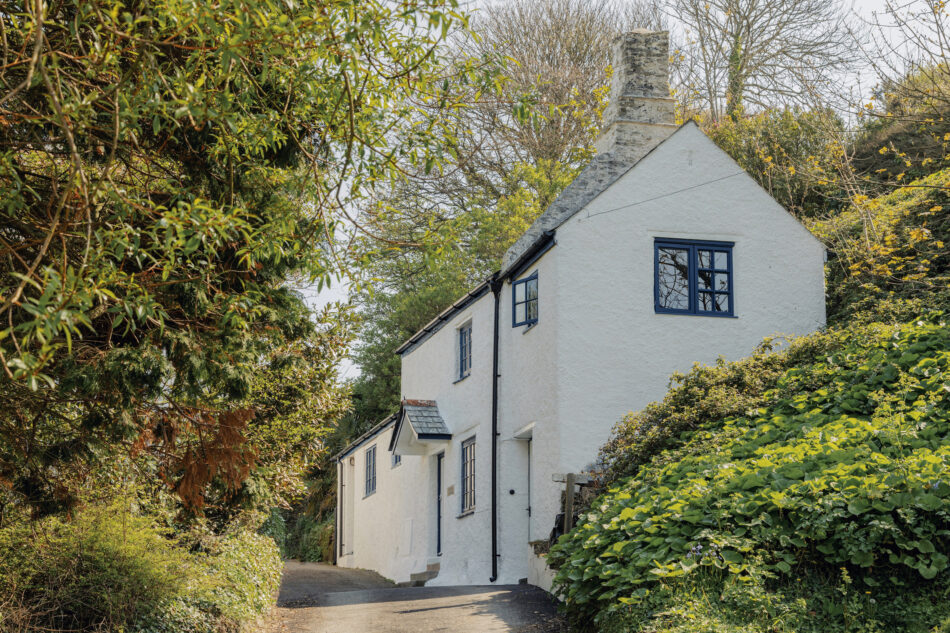 External walls have been limewashed a chalky white colour in the traditional vernacular manner, with wooden casement windows painted in Royal Navy punctuating the façade

This charming one-bedroom detached cottage is set in the ancient village of Ringmore on the South Devon coast, a short walk from some of the finest secluded beaches in the southwest of England. Originally built in the 16th century, the cottage is one of the oldest dwellings in the village and is set within the Ringmore Conservation Area and South Devon’s Area of Outstanding Natural Beauty. Spanning almost 600 sq ft internally, the home has plentiful vernacular character; lime plaster is used as a primary building material, and there is a beautifully exposed Devonian slate chimney stack. Contemporary interventions have been sensitively introduced to the house’s interior, while original features have been restored and revealed. Additionally, the home has a private courtyard garden.

Set within the parish of All Hallows, the great early-13th century church, the house is positioned at the lower end of the village. It is named after a previous late 19th-century inhabitant Mrs Dinah Skinner. Before this, the Prowse family had lived here for over 100 years. For most of the 20th century, the house had various uses, including as a storeroom and as overflow accommodation for the adjacent Journey’s End Inn (a famed Smugglers Haunt, which is now-excellent pub and restaurant). The cottage’s current residential incarnation was conceived in the 1990s when it was sensitively developed, extended and restored. For more information, please see the History section.

The cottage is built on an east-west axis, positioned on a gentle slope and set into the verdant hillside. Originally a modest ‘one-up, one-down’, the home has recently had two additions built at either end. A two-storey addition was added to the house to create the bathroom and below storeroom. A separate single-storey addition with an open pitch roof was added to accommodate a spacious kitchen.

Built on a foundation of Devon stone, walls are incredibly deep and built with layers of cob that have been limewashed a chalky white colour in the traditional vernacular manner. Punctuating the façade are the wooden casement windows, painted in ‘Royal Navy’ by Little Greene, a gentle nod to the nautical history of the house’s position by the coast. The chimney stack is built from Devonian slate and is beautifully exposed internally and externally, while the pitched roof crowns the cottage with traditional slate tiles.

Stone steps set beneath a pitched canopy porch lead to the centrally positioned plank door, featuring antique ironmongery, including historic decorative tee hinges. The door opens immediately to the sitting room and staircase, where limestone tiles run underfoot and a warming wood-burner is set in the open hearth of the exposed chimney stack. Unusually, the lintel is built with slate and set on a vertical axis, offering a wonderful focal point. Exposed beams supporting the ceiling and the walls are painted the same muted shade, ‘Rolling Fog’ by Little Greene.

The kitchen and dining room are set in the addition overlooking the garden, with a stable door offering a separate entrance. The roof is open to the pitch and supported by exposed timbers, creating a wonderful sense of volume. Quarry tiles run underfoot, with small square-set chocolate-coloured glazed tiles set into the kitchen worktops, beautifully complementing the floor’s design and materials. The kitchen cupboards offer plentiful storage, conveniently housing concealed appliances behind the bevelled oak panelled doors. Pretty open shelves complement the wall cupboards, all unified with an oak architrave. The walls are painted in the stone colour of ‘Masquerade’ by Little Greene and offset the deeper brown materials in the room wonderfully.

The bedroom is set on the entire first floor of the original house, with an open pitch roof, exposed timber beams and uniquely lime plastered walls lending great character to the room. The walls are bathed in the soft plaster-like shade of Castell Pink by Little Greene; exposed floorboards are whitewashed to allow for an airy space. A window looks out to the valley and village beyond. Storage is conveniently positioned in a cupboard above the stairwell, with a built-in bookcase set to the side. Possibly the most characterful room in the house, original architectural elements are most evident here, including a charming small hearth with an antique stove and small oak bressummer.

The shower room leads directly from the bedroom and has wonderful distant views of the sea at Ayrmer Cove through the casement window at the gable end, and through a second window, to the valley beyond. A spacious glass-screened shower is set into the width of the space; traditional sanitaryware is offset by chrome-plated brassware. Large-set limestone flags have been used as floor tiles, while walls are clad with beautiful deep blue tiles by Fired Earth.

The courtyard garden is set in a raised position at the east of the cottage, with rough-hewn local flagstones set atop a bed of compacted earth in the vernacular style. The garden features a wonderfully mature palm tree and is the perfect shaded spot for alfresco drinks on a warm summer evening.

Three different paths lead from the village to Ayrmer Cove and connect with the Southwest Coastal Path, including a permissive path through Ringmore Woods. Footpaths lead to Wyscombe Beach and Challaborough Bay. The golden sandy beaches of Bigbury on Sea can also be reached from Burgh Island, by the famous Sea Tractor, or if the tide times are favourable, by foot. A drink and sandwich at The Pilchard on the island are highly recommended.

Slightly further along the coast, South Milton Sands has a great beach shack for food all day and evening, while Bantham is also home to the Sloop Inn, perfect for a post-beach beverage.

Ringmore is a thriving village with a wonderful sense of community. All Hallows church is a focal point to the village, while The Journey’s End Inn is highly recommended for dining. Hollywell in nearby St Ann’s Chapel is incredibly an well-stocked grocery, and sells local meat, fish and general produce; it is also home to the local post office. Modbury is just five miles away and home to the nearest High Street and has a butcher, plentiful coffee shops and an art gallery. The Exeter Inn and The Modbury Arms are recommended for drinks.

For greater amenities, the charming market town of Kingsbridge is seven miles away, with many wonderful provisors, including Mangetout Deli, Catch of the Day fishmongers and Harbour House for salads and cakes. Further afield, and with the nearest train station to the cottage, the town of Totnes has excellent independent shops, cafes, and a wonderful market on Fridays and Saturdays. Additionally, Waitrose can deliver supplies from their branch in Saltash. Yealmpton is six miles away and has a butcher, fresh fruit and veg, wine, beer, cheeses, fresh bread and a Riverford organic farm shop; fresh fish can be ordered by special request in advance.

The culinary scene in South Devon is exceptional, with pubs and restaurants operating at full capacity during the summer months – booking is most definitely advised. Of specific note are The Fisherman’s Rest in Aveton Gifford, The Seahorse in Dartmouth, The Tower Inn in Slapton and The Riverford Field Kitchen near Slaverton.

Transport links are easily accessible, with Ringmore being 16 miles from the centres of both Totnes and Plymouth. Trains from Totnes to London Paddington take 2 hours 40 minutes, with a half-hour drive to the train station from Ringmore village.

The village of Ringmore is set in a remarkably bucolic and peaceful location within a beautiful green valley, with just 230 active recorded inhabitants. It has a history spanning to Anglo Saxon times and is recorded in the Domesday Book as ‘Reimore’.

Originally part of a Manor, and held on tithes, the houses in Ringmore were sold off to independent buyers in the late 19th century with the demise of the final Lord of the Manor.

The village was mostly home to agricultural workers over the centuries; the sandy bay at Challaborough was used to launch fishing boats to catch pilchards. Perhaps less salubriously, the village is also believed to have historically been a focal point for smuggling.