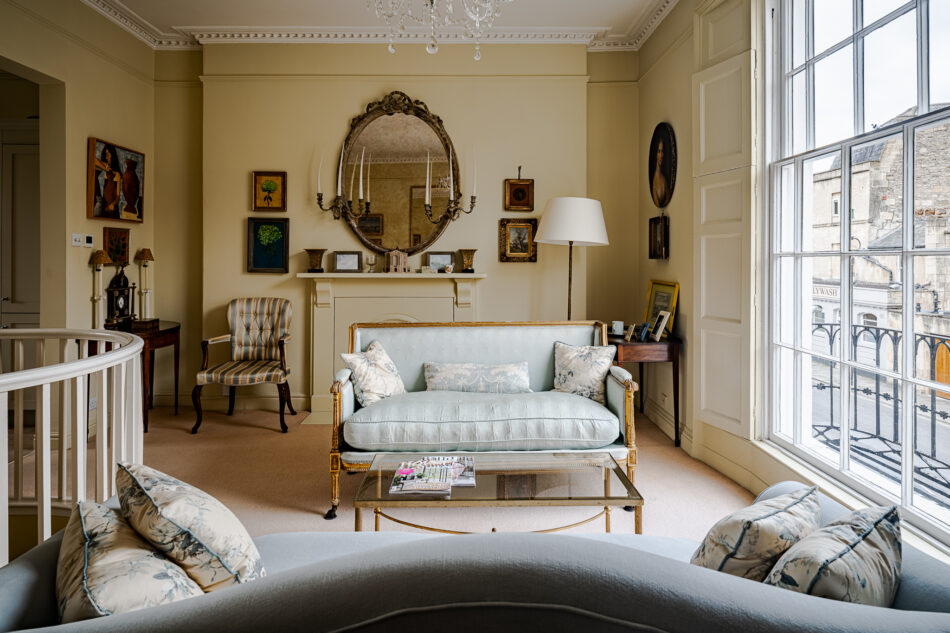 An exceptional apartment in the Pulteney Estate, which is regarded as one of the most impressive of all neoclassical urban set-pieces in England

This beautiful two-bedroom apartment unfolds across the ground and first floors of a handsome, Grade II-listed building on Daniel Street. Right in the heart of Bath, it was designed by John Pinch the Elder – the renowned architect responsible for many of Bath’s most beautiful buildings – in around 1810. The east-west aspect of the apartment means it receives beautiful afternoon and evening sun.

Daniel Street lies within the Pulteney Estate, which is regarded as one of the most impressive of all neoclassical urban set-pieces in England. In the adjacent street are Sydney Gardens, the only remaining 18th-century pleasure gardens in the country and a favourite of Jane Austen and her family, who once lived around the corner.

This is one of few apartments on the street to extend over two floors, and indeed, the two most architecturally important floors. It is also one of only three buildings in the street to have its original “25-light” sash windows on its first-floor elevation. These windows have 15 panes and 10 margin panes and extend from almost floor to ceiling, letting in fantastic amounts of sunlight.

Entrance is via a front door set back from the street, framed by a white-painted architrave. The building presents a handsome façade to Daniel Street, executed in the instantly recognisable honey-coloured stone for which Bath is so renowned.

The main living spaces unfold across the first floor, accessed via a minimal staircase with a simple wooden bannister that rises to the centre of the living area. This has walls painted in a muted shade of yellow, a colour that enhances the flow of light across the space. Wonderfully large windows allow copious amounts of sunshine in, illuminating the original ceiling cornicing, and the fireplace surround, which has been painted the same shade of yellow.

At the rear of the first-floor plan is the kitchen, open to the living area yet a distinct space in its own right, partially aided by the wooden floorboards that run underfoot in contrast to the carpeted living area. Grey-white wooden cabinetry runs along the right-hand wall, providing plenty of storage space and including open shelves for displaying crockery and other objects. A Corian work surface and splashback top the cabinetry on the other wall, which is painted a neutral shade of off-white. The room is framed by a large rear window that has beautiful, far-reaching views over the neighbouring garden. All of the windows in the apartment have their original wooden shutters.

The two bedrooms can be found on the ground floor, where there is a slightly darker colour palette of natural blues and greys. The bedrooms are both brilliantly bright, airy spaces, illuminated by light that streams in through large sash windows on both the front and rear elevations. There is wonderful open shelving, framed by a curving section at the top, in the front bedroom. The rear bedroom has lovely views over the gardens beyond. Both bedrooms also have an original built-in, four-door cupboard with shelving.

At one end of Daniel Street is the Victorian Henrietta Park, a lovely spot for a weekend stroll or picnic. Also nearby is access to the Georgian Kennet & Avon Canal, which runs through Sydney Gardens and offers some of the prettiest canal walks in England. The Victorian Bath Boating Station, where skiffs, punts and canoes can be hired, is close at hand for exploring the beautiful River Avon.

The glorious High Common is around 10 minutes away, while Royal Victoria Park provides a wonderful green expanse and is home to the revered Botanical Gardens. For further adventures in nature, the Cotswold Way lies directly to the north of Bath and myriad walks and hikes are available in the greater surrounding Somerset countryside.

Bath was recently included in Time Magazine’s edition: “The World’s Greatest Places of 2021” and is the only city in Britain to achieve Unesco World Heritage status, which continues to be vehemently protected. Uniquely situated in a hollow in the hills, the surrounding Somerset countryside makes an incredible backdrop for the city. Founded in the 1st century AD by the Romans, who famously used the natural hot springs as a thermal spa, it became an important centre for the wool industry in the Middle Ages. In the 18th century, under George III, it developed into an elegant city with neoclassical Palladian buildings.

Bath is well served by outstanding retailers and restaurants, with a particular focus on independent provisors. Colonna and Small’s, Corkage, Landrace Bakery and the weekly Farmer’s Market are of particular note. The city’s cultural distractions are plentiful, with brilliant theatres and galleries; The Holburne Museum, the Fashion Museum and The Edge arts centre all hold world-class exhibitions. The Grade II* listed Cleveland Pools – designed in 1815 by the same architect responsible for Daniel Street and believed to be the oldest public outdoor swimming pool in England – are within easy walking distance. The Bath Recreation Ground, the National Trust’s Skyline Walk and the Roman Baths are also nearby.

The area is renowned for the quality of its independent and state schooling, including St Stephens’ Primary School, King Edward’s and Prior Park College. Royal High, Royal High Junior School, Kingswood School and Kingswood Preparatory School are also nearby.

Transport links are excellent, with Bath Spa train station at the southern edge of the city centre – around a 15-minute walk from Daniel Street – providing a direct line to London Paddington in under 80 minutes. The M4 motorway lies to the north of the city and is quickly reachable by car.

Please note that all areas, measurements and distances given in these particulars are approximate and rounded. The text, photographs and floor plans are for general guidance only. Inigo has not tested any services, appliances or specific fittings — prospective purchasers are advised to inspect the property themselves. All fixtures, fittings and furniture not specifically itemised within these particulars are deemed removable by the vendor.
Daniel Street — Bath, Somerset
Interested? Let’s talk