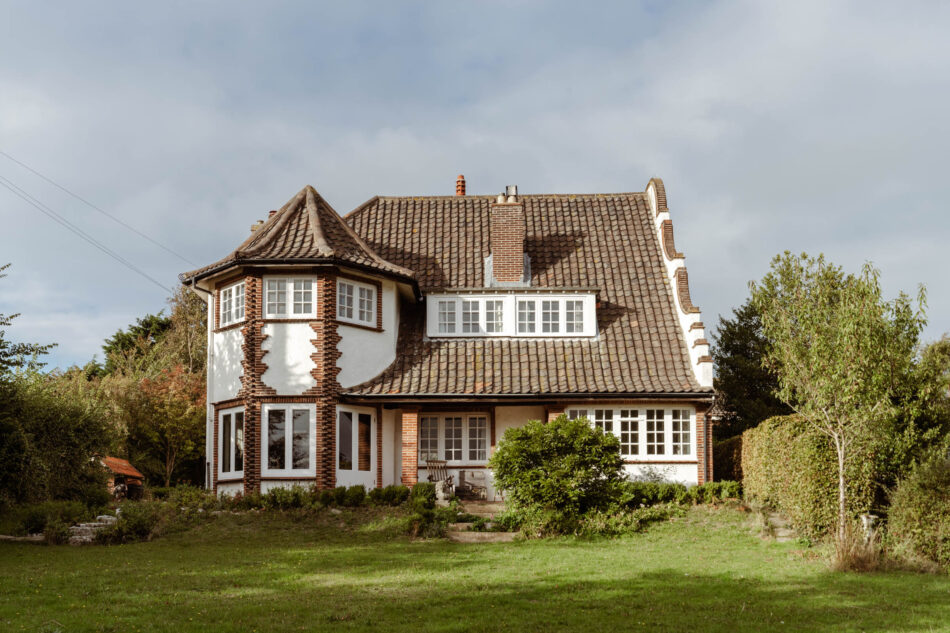 Crowned by a wonderfully steeply pitched roof, framed on one side by a sculptural Dutch gable

This exceptional eight-bedroom house is found in increasingly popular Sheringham, nestled on north Norfolk’s beautiful coastline. Built in 1920 by the renowned Arts & Crafts architect John Sydney Brocklesby, the house retains many original features typical of its architectural style, including its tiling, fireplaces and handsome exterior. Extending over 3,200 sq ft, the house unfolds over three floors with an annexe that could be used as part of the main house or rented out. Minutes from both the sea and Sheringham’s picturesque town centre, the house is on an unusually large plot, surrounded by a lovely garden.

The house has a fascinating history, built as the primary show home for Sheringham’s exclusive 1920s development, ‘St Austin’s Grove’. Constructed on land originally belonging to a local priory, the house was designed by the esteemed Arts and Crafts architect John Sydney Brocklesby (1879-1955).

This home was commissioned by a local businessman for his personal residence. Designed with entertaining guests in mind, the largest rooms in the house, including the dining room and expansive sitting rooms, face south over the garden.

There are many of the original features still inside the house; the Arts & Crafts movement stood for traditional craftsmanship and was notably anti-industrial. Examples of this more romantic decoration are in handmade glazed-tiled fireplace surrounds found throughout the house and the pine and oak beams. It is a light and elegant house and makes for a very exciting opportunity for its next owner. For more information, please see the History section.

There are many points of entry into the house. The main front door opens into a wide, voluminous hallway. To one side is a kitchen, which has been recently updated, complete with smart white cabinetry and a navy-blue Aga. The front of the house is home to a bright dining room with a protruding large square bay window drawing light into the room. Original floorboards add a rustic touch here and throughout most of the house, and a pretty fireplace sits to one side with wood and glazed tile surround.

The sitting room is on the same side of the house. Here, another large bay of tall windows and a pair of glazed French doors frame views over the garden and surrounding rooftops. Two further beautiful original brick fireplaces sit on either side of the room. A shared family bathroom lies in the middle of the ground floor.

A wooden staircase ascends upstairs to five double bedrooms. A bright, airy double bedroom sits above the sitting room, with the same curved wall of windows and wooden floorboards as the room below. There is also another shared bathroom on this floor. Two more bedrooms sit on the top floor, each with the same tiled fireplaces found in the rest of the house. There are some superb views from the rear bedrooms towards Beeston Common and Cromer Ridge.

The one-bedroom annexe can be accessed through the house or one of its two front doors. Unfolding over two floors, it is complete with a galley kitchen and an open-plan dining and living area and could easily be rented out or used as an office/studio.

A generous garden surrounds the house, mostly laid to lawn with stone steps down into a lower terrace. At the foot of the garden, the current owner has installed some vegetable patches and an array of established fruit trees, including apples, pears, sweet almond and plum. To one side of the house is a patio garden with ample space for dining outdoors. Surrounded by mature trees and hedges, the garden is brilliantly private. There is also a private courtyard to one side of the house, a brick garage with a workshop and private off-street parking.

Sheringham is a picturesque coastal town surrounded by woods and heathland with quaint back streets. The town has retained its old fishermen’s quarter, where brightly coloured crab boats are moored on the beach below the promenade.

The town is home to good pubs, restaurants, shops and the popular Sheringham Little Theatre, alongside its cafe, The Hub. Each year, Sheringham is witness to a week of Viking-themed events in February, as well as a Crab and Lobster Festival, shared with Cromer, in May, and a spectacular carnival in August.

The Norfolk coastal path leads from the town to Beeston Bump, with incredible views over the North Sea, Sheringham and nearby West Runton. There are many pretty villages and towns nearby, including Holt, an attractive rural Georgian town with plenty of facilities, including a market, a clothes retailer called Old Town, an excellent fishmonger and a good game butcher. The Black Apollo coffee shop also roasts its own coffee.

The North Norfolk coast is renowned as one of the most beautiful areas of the UK, with incredible sandy beaches, such as Holkham, and large areas of protected marshland. It is notable for its number of excellent places to eat out, such as Wiveton Hall Café and No. 1 Cromer. A little further afield is the popular Gunton Arms, a traditional pub with rooms in one of the area’s fine historic parks.

From March to October, there are several historic homes to visit, including Sandringham and National Trust properties at Blickling & Felbrigg. The Holkham Estate, with its stunning beach, wildlife reserve and magnificent house and grounds, is within easy reach by car.

Sheringham runs services to London via Norwich. Norwich itself is approximately an hour and 55 minutes from London Liverpool Street by train.

This house was designed by architect J. S. Brocklesby, who was particularly active in the early 20th century, focusing on designing churches and suburban residential houses. He was a Fellow of the Royal Institute of British Architects and designed many houses in Merton, London, which Pevsner mentioned in his 1983 book on London and the South.

This house is perched on a hill and, as such, has become a landmark in the area. It is crowned by a wonderfully steeply pitched roof, framed on one side by a sculptural Dutch gable. This sits above white rendered walls, interspersed with decorative quoining. The house takes inspiration from Dutch architecture, perhaps a reflection of the history of this part of East Anglia, which was settled by the Danes in approximately 750AD.

Sheringham is also close to the Grade-II listed Weybourne Mill. Initially constructed in the mid-19th century, it was restored and extended by J. S. Brocklesby in the 1920s. A handsome building, it has a Norfolk boat-shaped cap and five redbrick storeys, which at one stage had four double shuttered sails, and a stage around its girth on the second floor.