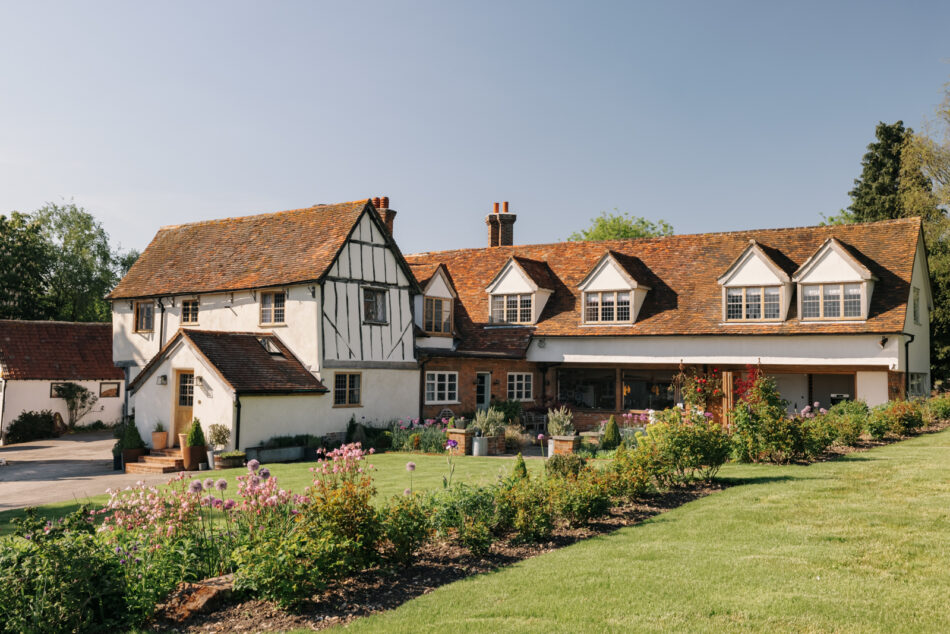 The original section of this incredible five-bedroom, Grade II*-listed farmhouse was built circa 1500. Cromer Farm now extends over 4,100 sq ft and is framed on two sides by a beautiful stable block. With 18.5 acres of land including a riding arena (which is larger than Olympic size), a sun terrace and a lovely garden complete with vegetable patches, the house is surrounded by greenery and has wonderful views.

Cromer Farm would originally have been an open hall house when it was built in the 1500s, with a central chimney and two cross-wings. It was extended in the late 16th or early 17th century, when a floor was also likely added in the hall, and again in the 20th century. A wealth of original features remain and have been carefully uncovered by the current owners, from Medieval wall paintings in the sitting room to a fireplace that dates back to 1639, which is complete with incredible witches’ marks (historically believed to protect dwellings). There are numerous other notable details, such as the crow-stepped sides of the central chimney, which are a fine example of Tudor brickwork, and the hexagonal chimney stack above.

The current owners have undertaken a vast amount of work, sympathetically modernising the timber-framed house whilst conserving its historic fabric and structure. Nestled on the fringe of the bucolic hamlet of Cromer – meaning ‘lake frequented by crows’ – the house enjoys expansive views over the nearby countryside. In recent years, the house has been used as a stud farm.

Entry is through a front porch that leads into a boot room. There is a generous utility room directly in front, with a terracotta-tiled floor and walls clad in white and yellow-painted panelling, which contains a secondary oven and a butler sink. To one side is a laundry room, with a brick floor and bespoke fitted cupboards by British Standard that run along one wall. There is also a guest WC, decorated with colourful wallpaper by Cole & Son that has been set against a reclaimed Spanish tiled floor from Bert & May, which dates from around 1900.

A hallway leads to the original part of the house, via a snug, to the living room beyond. Old wooden beams, lime plaster, hand-crafted oak windows and leaded lights feature here – and, indeed, are celebrated throughout the house. There is a 17th-century brick fireplace that provides a warming focal point to the space; its lintel has a number of marks, also known as ‘Marian’ marks, which were commonly inscribed on doorways and fireplaces from 1550-1750 in order to ward off evil. Opposite is a segment of the Medieval wall painting which has been sensitively revealed by the current owners.

The original hall now contains an expansive dining room, home to an incredible brick inglenook with a curved lintel. Contemporary parquet runs underfoot, leading to the kitchen beyond, and a wall of windows opens onto the south-facing sun terrace. The current owners have converted the basement and currently use it as an office.

Stairs ascend to the first floor, leading to another snug/library with original wooden floors and fitted bookshelves lining one wall. There are four bedrooms; these share two bathrooms, both of which feature luxurious marble tiles by Claybrook Studio and fittings by Aston Matthews. The main bedroom is found at the far end of the plan and is fitted with a wall of bespoke cabinetry that leads to an en suite, marble-tiled shower room.

Cromer Farm lies amidst formal gardens with beautifully planted borders, surrounded by paddocks extending just under six acres. There are an additional 12.5 acres to the south – currently used for grazing – which could be retained by the client.

A substantial block of stables in an ‘L’ shape is found to the north of the house. There is also a forge, a piggery and a detached Grade II-listed granary. These numerous outbuildings could be converted into auxiliary accommodation or studios/workshops, subject to planning.

Cromer Farm is in a brilliant position, situated just one mile from nearby Walkern Village which is home to several pubs, such as The White Lion, as well as a local convenience store. The Jolly Waggoner in Ardeley and The Rising Sun in Halls Green are also within walking distance of the house. About 15 minutes from the farm is Pearce’s Farmshop, which offers a vast array of fruit and vegetables, a butcher and a café. The house is also within easy reach of the neighbouring towns of Baldock, Letchworth and Stevenage.

Beautiful walks can be found on the miles of public footpaths around Cromer Farm, including those around Ardeley; there is also a Roman Road that winds through the fields to Baldock. There are plenty of good schools in the area including a local primary school in Ardelely, Heathmount Prep School in Hertford and St Christopher’s in Letchworth.

Stevenage mainline station is 4.6 miles away and offers numerous fast trains to London King’s Cross/St Pancras in just 20 minutes and to London Bridge in 36 minutes. Access to the A1(M) is approximately 15 minutes by car and Stansted Airport is 19.8 miles away.

Please note that all areas, measurements and distances given in these particulars are approximate and rounded. The text, photographs and floor plans are for general guidance only. Inigo has not tested any services, appliances or specific fittings — prospective purchasers are advised to inspect the property themselves. All fixtures, fittings and furniture not specifically itemised within these particulars are deemed removable by the vendor.
Cromer Farm — Cromer, Hertfordshire
Interested? Let’s talk