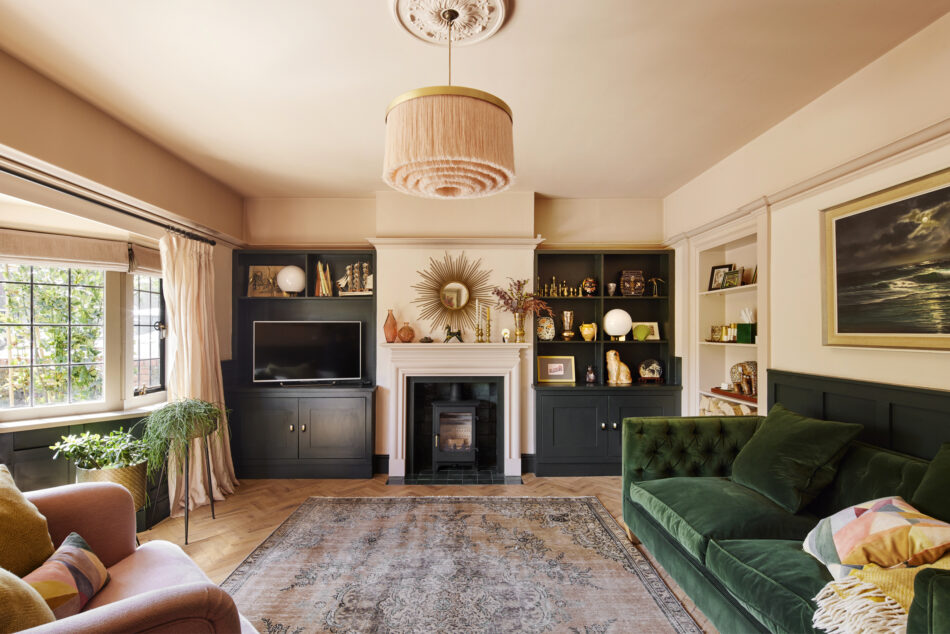 A fantastic example of the Arts and Crafts, comprehensibly restored and renovated to an exacting standard.

This wonderful six-bedroom detached house in Margate extends over 2,760 sq ft and is a superb example of the Arts and Crafts movement. As with many Arts and Crafts buildings, the façade draws stylistically on Gothic architecture and the buildings of low countries while the interiors celebrate colour and style. Extensively yet sympathetically renovated by the current owners, much of Cornwall Garden’s original features remain intact, while the house has been updated to better suit contemporary living. The house is also under 500 metres from the sea, namely the Walpole Bay Tidal Pool.

Built in 1910, the house represents the later phase of development in Cliftonville, which connected the seafront Eastern Esplanade with the market high street of Northdown Road. The grand exterior elevation is set back from the road behind iron railings and large laurel hedging. Red brick, large timbers and roughcast stucco blend harmoniously to create a rhythmic, inviting and approachable house, typical of the movement’s sensibility. The mixture of architectural styles seen in the rustic timber at ground level, contrasting with a Queen Anne inspired oriel window and finely detailed classical dentils on the weatherboards at the gable, fine details representative of the very best of Arts and Crafts. For more information, see the History section.

Entrance to the house is through a recessed and sheltered front door; this leads to a vestibule with geometric tiling underfoot. Beyond, a large hallway has large solid oak parquet flooring, which extends throughout the front section of the house. To the right of the hall is a WC, decorated with jolly hand-cut, pink tiling and lit by two reeded glass windows. A pair of sliding pocket doors, also glazed with reeded glass, leads from the hall to the kitchen.

The rear of the house has been completely remodelled to a high specification and now encompasses the original footprint of the garage. French limestone tiles run underfoot throughout with underfloor heating. The large kitchen/dining area is a wonderfully bright space with large Crittall doors that lead out to the garden. Two skylights floods the room with light, and a large frameless window in the dining area looks out into the garden and blurs the boundary between inside and out. Bespoke seating, finished in a boucle fabric, and a tiled dining table are built into a nook with a vaulted ceiling.

Cabinetry in the kitchen is bespoke and finished in an off black. The island, in sharp contrast, is finished in a vibrant burnt orange, recessed handles marry the contemporary and tradtional elements seamlessly. A Belfast sink and raw brass hardware nod to the Edwardian heritage of the building while disguising modern conveniences such as a waste disposal and boiling water tap. A Bora hob with a downdraft extractor is the kitchen’s focal point. Two built-in ovens are located behind, along with a double-width Fisher and Paykel fridge. On the left is a bespoke daybed, with storage below and a bookcase surrounding it. A pantry with a full-size wine fridge lies next to the kitchen, with a utility room set adjacently.

A sliding glazed door leads to a room where there is dramatic, seemingly gravity-defying corner glazing. Currently used as a studio, this space could easily serve as a formal dining room or additional reception room.

Panelling in the drawing room has been reinstated, and the original plate rail has been restored. The room is painted a delicate blush hue, contrasting with deep forest panelling and bespoke matching bookshelves. A wood burner is the heart and hearth of the room, standing on hand-cut, deep-green glazed tiles. East-facing, the space is flooded with light throughout the day due to the bay extending the width of the room.

Pure wool carpet with burnt orange edging runs up the large L-shaped staircase with a glazed half-landing on the first floor. Here, four double bedrooms and a large family bathroom have the original floorboards and wonderful Edwardian fireplaces. The bedrooms are painted in warm, comforting hues and benefit from unusually high ceilings with original coving, the original metal framed windows have been restored throughout the house.

The large family bathroom has blush walls with contrasting, geometric tiling. A large, free-standing bath is the focus of the space, and a separate overhead shower with a Crittall screen lies to the side. The room benefits from underfloor heating, keeping toes toasty in the winter months.

Ascending to the second floor, there are two further bedrooms, one en suite. The front bedroom is a whimsical space and has an oculus window in the gable. The window, coupled with the semi-exposed rafters, create the feeling that the room has leapt from the pages of a fairy-tale and would make for a wonderful children’s playroom or bedroom. The second bedroom is a more straightforward affair, painted in cornflower yellow. An en suite bathroom has a contemporary finish with subtle mid-century detailing and terrazzo tiling.

The large private garden is enclosed by slat timber fencing. Laid to lawn, it has deep borders. Laurel trees at the rear provide balance while providing shade and privacy. A large seating area with a pergola is the perfect spot for summer dining. The garden has water and power supply; a summerhouse and shed lie to the rear.

At the front of the house, a bike store is large enough for kayaks and has a tap and power supply.

Known for its creative community, Margate is home to the Turner Contemporary, synonymous with the town and visually unmistakable. Designed by architect David Chipperfield, this is a brilliant contemporary art space with far-reaching views over the sea, named after landscape painter J. M. W. Turner, who went to school in Margate and returned throughout his life.

Margate is also famous for Dreamland, a vintage theme park with rides, musical acts and a drive-in cinema. There are numerous restaurants, including Angela’s, a sustainable seafood bistro, and Hantverk & Found. It is also home to independent shops such as Werkhaus, Ruskin and the cosy Margate Bookshop. Walpole Bay Tidal Pool is at the end of the road and is a perfect spot for a dip. Dory’s is a fantastic seafood bar nearby priding itself on locality and works closely with Kentish fishermen and independent growers to create its menus.

The nearby coastal towns of Broadstairs and Ramsgate are also well known for their array of pubs, restaurants and independent shops, as are Herne Bay and Whitstable, which are slightly further afield.

The house has excellent links to London, with trains from Margate to London St Pancras in under an hour and a half or London Victoria in one hour and 45 minutes. There are trains to Canterbury in half an hour, which is also a short drive away.

Margate has a vital role in the history of the seaside holiday. It can be claimed to have been a pioneer of the concept. The 1750s saw the first use of bathing machines, the first Georgian square built in a seaside town, the first development beyond the historic footprint of a coastal town and the development specifically to serve holidaymakers.

The influx of tourism gathering pace throughout the 18th century transformed the small working fishing town into a haven for society, attracting nobility for the ‘season’ in the same fashion as Bath. The benefits of the sea air and bathing led to Margate becoming a desirable location to convalesce; The Royal Sea Bathing Hospital was opened in 1791.

The town’s proximity to London meant that Margate had been at the vanguard of seaside discovery for many living in the city. The dawn of the railway in the first half of the 19th century meant that coastal towns further afield became an option for those more well-heeled, and Margate for the first time faced competition.

However, the pioneering spirit remained. In 1846 trains started coming to Margate, which meant it could offer the lower-middle-class the first viable holiday destination. This brought the concept of a holiday to the masses and drove forward reforms to working standards, such as The Bank Holiday Act of 1871.

The area of Cliftonville, where Cornwall Gardens is located, represented Margate’s eastward expansion in the 19th century. The area was built as a haven from what had then become the bustling and boisterous town centre. Cliftonville boasted its own beaches and offered a more sedate pace of holiday.

The beaches around Cliftonville remain very popular in part thanks to the Grade II-listed Walpole Bay Tidal Pool constructed in 1937 during the Physical Fitness Campaign, which saw the large-scale building of Lidos and sports facilities.