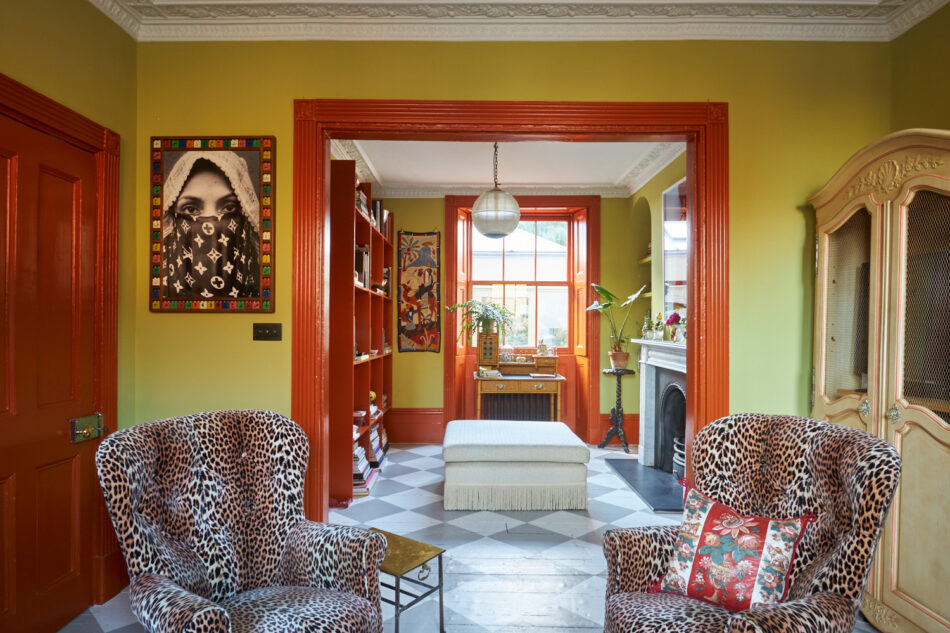 This incredible Grade II-listed three-bedroom house sits on a handsome Georgian terrace in Limehouse. Set back from the road, the house is constructed with London stock brick and has a balanced, classical façade with large sash windows. Inside, the current owners have collaborated with interior designer Benedict Foley to create a series of colourful and characterful spaces that celebrate the original features and Georgian proportions.

The area of Limehouse has a long and varied history, named after the limekilns that operated in the area from the mid-14th century, which converted chalk from Kent into quicklime for the construction of the city’s buildings. From the late 16th century, the area was home to shipbuilding, and as a result, many wealthy merchants built their houses nearby, especially from the early 18th century onwards. These houses were served by the famous St Anne’s Church, designed by Nicholas Hawksmoor and built in 1730. For more information, please see the History section below.

Stone paved gardens lie in front of the terrace and each house has a raised front door at the top of a short run of steps. In this particular house, the front door opens to a generous hallway with a Georgian staircase at the end. To the right is the living room, a double room with two working fireplaces with attractive marble surrounds. To the front of the house are wooden sash windows and shutters, painted a brilliant Heat by Little Greene. The ceiling is crowned by intricate cornicing, while decorative mouldings frame each door. Original floorboards, painted a playful white and grey chequerboard, run throughout the ground level.

The ground floor corridor leads to the back of the building and into a wonderful garden room. Glazed at the front and rear, with a large skylight above, the room is bathed in light throughout the day. On one side are a sink and a workbench, which doubles as a bar area.

A yellow-painted staircase with a leopard print carpet descends into an open-plan kitchen and dining room. The kitchen area comprises bespoke white cabinetry set against dark granite worktops over a stone floor. Two ovens sit in the original fireplaces. To the rear of the kitchen is a useful utility room.

The first floor is home to the principal bedroom, painted a fantastic combination of Light Peachblossom, Ashes of Roses and French Grey by Little Greene. There are lovely period features in this room, including decorative cornicing, shutters and fire surround. On this floor, there is also another smaller bedroom, which would also make a brilliant study. Here, the owners and Benedict have used an inventive colour scheme, using three main bold and complementary paint colours, set against the owners’ bright and patterned curtain. Original cupboards flank the fireplace, painted a rich Vardo by Farrow & Ball.

The top floor is home to a family bathroom – accessed from the hallway – and another generous bedroom with an en suite shower room. All the fireplaces throughout the house are working.

Wide planted borders frame the garden. An area perfect for outdoor dining is positioned to the rear, next to a useful shed. It is a beautifully green space, with a vibrant mixture of flowers, shrubs and mature trees.

The house is a short walk from many green spaces, with both Stepney Green Park and Stepney City Farm and café nearby. Mile End Park, Victoria Park and, more locally, St Dunstan’s Church, dating from the 12th century, are also close.

Limehouse has many good eateries, such as Yurt Café, famed Punjabi restaurant Tayyabs, the much-loved bakery Rinkoffs and several excellent coffee shops, including Aldgate Coffee House. The eclectic George Tavern on Jubilee Street is recommended for drinks and occasional music events, while the Whitechapel Gallery provides a cultural distraction. Ian McKellen’s famous pub, The Grapes, is a short walk from the house, as is The Old Ship on York Square.

With its shops and restaurants, Canary Wharf is on the same DLR line or is a 20-minute walk from the house. Spitalfields and Shoreditch offer further dining, entertainment and shopping, with restaurants including Ottolenghi, Cecconi’s and St. John Bread & Wine. Independent cinemas, and the Everyman, are both close by.

The house is brilliantly positioned between Canary Wharf and the City. The nearest station is Limehouse (DLR), with trains to Shadwell (Overground) and Bank (Northern, Central and Waterloo & City lines) in seven minutes and under. Nearby Whitechapel station (District, Hammersmith & City lines and the new Elizabeth Line) now provides access to central London in ten minutes and Heathrow Airport in 30 minutes.

The Limehouse Cut, London’s oldest canal, is a short walk from the house. Constructed in 1770, it provided a link between the River Lea with the Thames. This house was built not long after for one of the merchants whose boats would have sailed into the docks.

Arguably the most interesting resident of the house was Henry Vane, a master rigger who lived in the area for many years and moved into Commercial Road in 1881. He described himself as a “partner in a firm of ship-chandlers in Limehouse”, where he employed people to pick oakum (a preparation of tarred fibre used to seal gaps, traditionally used in shipbuilding).

A 1901 census showed that another couple had moved into the house; George and Catherine Olley. George was a metal roller, and they lived in the house with their nine children, ages five to 19.