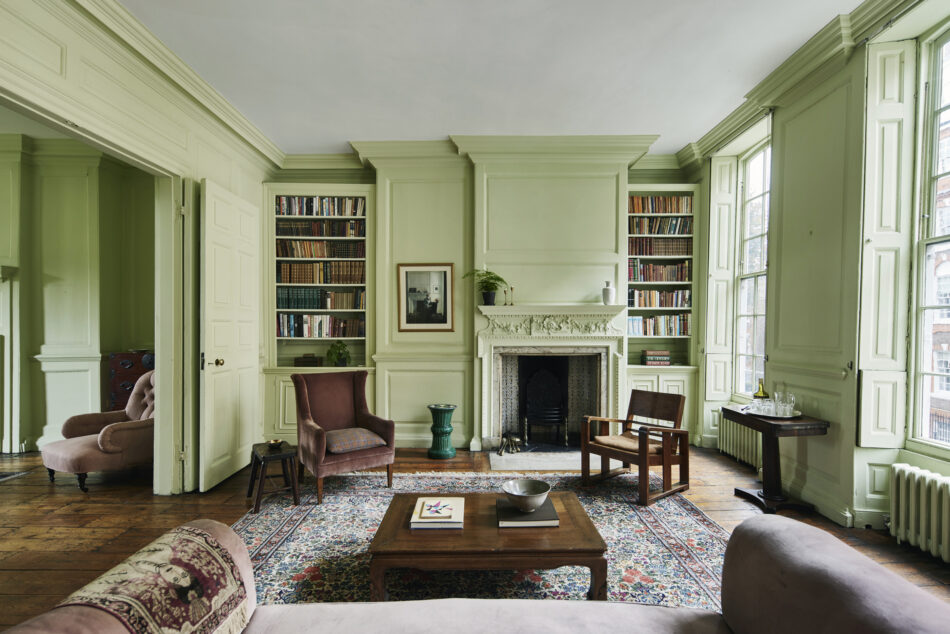 With an illustrious history, the house has several past inhabitants from noted cultural, artistic and bohemian circles

This remarkable Grade II*-listed early Georgian house lies on Church Row, in the heart of Hampstead village, within its conservation area. It was built around 1720 in the Queen Anne style and is a beautiful example of a fine early 18th-century townhouse. Set over six characterful levels, it has four bedrooms and a versatile plan measuring almost 3,800 sq ft internally. Additionally, there is a private south-facing walled garden to the rear, leading discretely to a separate garage. Incredibly, the house has retained all of its original architectural features, which are now waiting to be revealed and celebrated. There is great potential to improve the home further, and as such, it will require some updating.

Hampstead was granted to the Benedictine monks of Westminster Abbey by charter in AD 986, and it is believed that a church was placed on Church Row not long after. The beautiful Grade I-listed St John at Hampstead still stands on this spot in the centre of the street. Church Row’s local importance is well documented; Pevsner Architectural Guides describes it as ‘the best street in Hampstead’. For more information, please see the History section.

Set behind original cast-iron railings with urn finials, the house is made of brown brick with red brick dressings. The façade is punctuated with large box sash windows and crowned with a slated mansard roof. The doorcase is thought to be a late Georgian addition, comprised of a fluted surround and a round-arched doorway with pilaster jambs; a radial patterned fanlight sits above the six-panel entrance door.

The door opens immediately to the wide private entrance hall, which features the first glimpse of the sense of history, beauty and elegance that permeates the entire home. Raised and fielded panelling incorporates a dado rail and box cornice above, and a fluted pilaster archway leads to the broader staircase hall. Here, a grand staircase has wide treads and hand-turned barley twist balusters. The outstanding architectural features include further panelling and box cornicing on most floors, with beautiful joinery, fire surrounds, box sash windows with shutters, and pitch pine floorboards.

The ground floor is currently configured with a spacious dining room to the front of the plan, with the kitchen opening directly from here. Both rooms are fully panelled and feature beautiful fireplaces, inset with faience Delft-style tiles. The dining room has a lovely low light, almost Dutch in quality. The next-door kitchen is remarkably bright and features panelled cabinetry complementing the Georgian panelling. There is a WC at the plan’s rear and separate garden access.

The first floor is home to the bipartite drawing room. Here, the two areas are easily separated by original folding doors in a handsome architrave. Light floods the room from north and south, with a trio of full-height sash windows to the front. This floor has exceptional ceiling heights and an incredible feeling of space. Panelling features ovolo mouldings with beautiful fireplaces in both areas. The adjoined rear ‘closet’ space is set in an unusual, canted bay and makes for a charming separate reading area overlooking the garden.

The second floor is entirely given over to the principal bedroom suite. Sleeping quarters are set to the rear and open to a spacious dressing room; next door is the en suite bathroom. Ovolo-moulded panelling continues in the floor’s three rooms, with a beautiful fireplace in the bedroom. On the third floor are two further bedrooms, with horizontal boarding to dado height and a bathroom. The back bedroom enjoys brilliant views of central London through an unusual heraldic glass casement window set into the canted bay. The uppermost floor is a garret of sorts and forms the fourth compartmented bedroom, enjoying the very best views in the entire house.

Two further spacious rooms are set below the stairs on the lower-ground floor. Both have quarry tiles running underfoot and large open hearths. A bathroom and separate laundry area are set to the rear. The front room opens to the exterior lightwell, running the width of the house; it also has independent access from the street. Two deep vaults run under the pavement, making for excellent storage space or wine cellars.

A private walkway is concealed behind a secure rear gate in the garden, leading to the garage on Perrin’s Walk.

The glorious south-facing walled garden is a quiet oasis in the heart of bustle of Hampstead Village. Exceptionally peaceful, the York stone terrace is a welcome sunny spot for outdoor seating, complemented by wisteria climbing the walls. A lawn surrounded by mature shrubs and an old mulberry tree leads to a secondary stone terrace positioned under trees to enjoy the shade on hot summer days.

The house is just a few minutes’ walk from the delights that make Hampstead one of the most sought-after locations in London. Hampstead High Street offers a plethora of boutiques, cafes and eateries, including Jin Kichi, Oddono’s gelateria, Ginger & White, Gail’s and the famous Hampstead Crêperie. There are several charming pubs nearby, including The Horseshoe, The Flask and The Holly Bush, while the open expanse of Hampstead Heath is just minutes away. Some of London’s best independent schools can be reached on foot.

Hampstead underground station (Northern Line) is a one-minute walk from the house.

The artist William Rothenstein lived here with his family from 1899. Lord Alfred ‘Bosie’ Douglas resided here from 1907, at that time most well-known for having been Oscar Wilde’s sometime companion.

In the 1950s, writer, author and broadcaster Ludovic Kennedy and his wife, the famed ballet dancer and actress Moira Shearer took up residence. This continued the bohemian sensibility that defined the area, which was well documented earlier the same century by artist Rothenstein in his personal diaries.