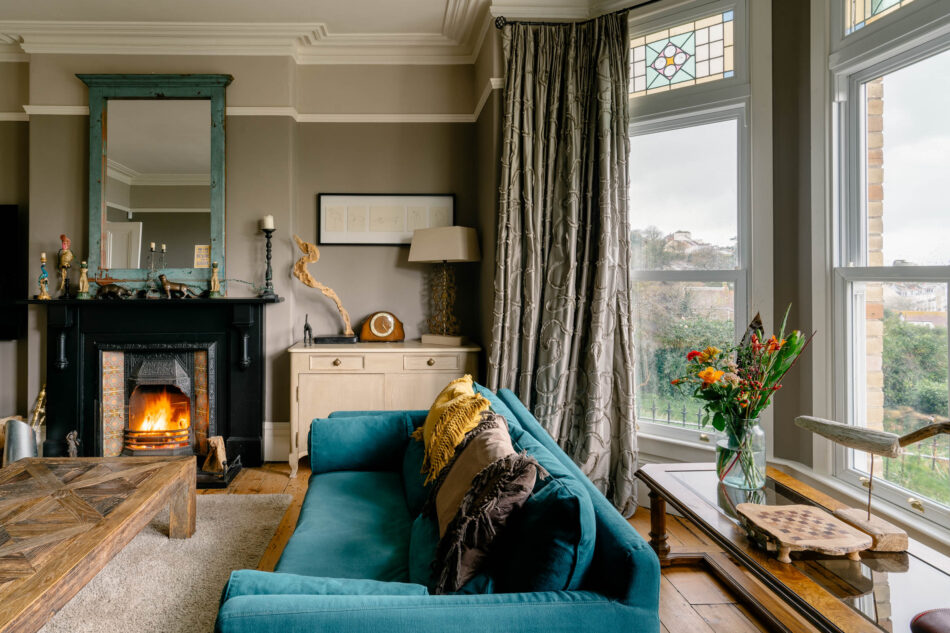 Period details such as original fireplaces and stained glass merge with thoughtful design updates such as exposed wood paneling in a Provençale manner.

Set in a wonderful position, this beautiful five-bedroom house in Ilfracombe, Devon, has commanding views over the Bristol channel. Recently restored by the current owners, the interiors celebrate Victorian grandeur, retaining original features, including fireplaces and stained glass. These period details have been thoughtfully combined with design updates, such as exposed wooden panelling and new cast iron radiators, to create a calm and considered house, perfect for modern living. The house is in the peaceful environs of Ilfracombe, a short walk from the Victorian tunnel beaches and the refreshing coastal walks, and it has a lovely North-facing terrace with far-reaching views across the ever-changing sea.

Ilfracombe is nestled into the North Devon coastline, surrounded by rugged cliffs and sandy beaches. This house is set back from the coast, in a neighbourhood known as Chambercombe, on the end of a terrace of houses built in the 1800s. One of the more sought-after roads in the town, Chambercombe terrace was built by Robert Heddon Lewis, who had an eye for elegance and loved this house so much that he lived in it. For more information, please see the History section.

The front door, with its original stained glass panelling, hints at the sense of history preserved throughout the house. Entry is to a large hall with soaring ceilings and an impressive sweeping staircase. Intricate, Victorian mosaic tiling grounds the room.

The main living room is to the right of the hallway, dominated by a large sash window overlooking the coast. The light that pours in through this window complements the deliberately calm colour scheme, which keeps the attention on the period details, such as the moulding and the tiled fireplace.

At the rear of the plan are the kitchen and dining room, which is open plan but divided by a vast limestone fireplace, reclaimed from an antique market in the Isle Sur La Sorgue in Provence. The space is lit by a full-length sash window. The adjoining modern kitchen has flush units by Bulthaup. Ample built-in storage has been added around the walls, and a central island houses appliances by Miele and a Quooker hot tap. A useful utility room at the rear of the house has Velux windows in the roof, allowing light to stream in.

The grand staircase, carpeted with a Roger Oates runner, leads from the entrance hall to the first floor. Here, the main bedroom has the same exceptional sea views, complemented by blush pink walls, creating a sense of serenity; built-in wardrobes add storage. The second bedroom has an original fireplace and characterful double sash windows while another good-sized bedroom also has good natural light. A further two bedrooms are situated on the second floor: one with loft storage and the other with unrivalled views across the coastline.

Bathrooms are dispersed throughout the house. The main family bathroom is clad in Victorian tiles and has a roll-top bath. Another has a Kaldewei shower and underfloor heating. A third references the Provencal elements of the kitchen with exposed grain wood panelling painted in Elephants Breath by  Farrow & Ball. The top floor has a shower room smartly decked out in navy blue tiles.

Due to its setting at the end of a row, the house has a wraparound garden where the surrounds of Ilfracombe can be admired from a spectacular vantage point. From the street, a series of stone steps wind up through the patioed park and rose beds. To the left, a patio has been established for outdoor dining and captures the best of the sunset over the Bristol Channel. Surrounding the house, a walled garden has been established using reclaimed stones, and extensive flowerbeds have been planted with a mélange of perennial and annual plants. Another dining terrace captures the midday light on sunny days, making it the perfect spot to take lunch outside.

Ilfracombe is one of the liveliest towns on the North Devon coast, thanks to its harbour with a range of attractions from Damian Hirst’s imposing sculpture of Verity to the mignon Chapel of Saint Nicholas. It is also the departure point for boat rides to Lundy Island, famous for its dramatic scenery and dazzling array of wildlife.

There are also endless options of coastal walks along the South West Coastal Path from Ilfracombe. A particularly rewarding hike commences in Lee and passes the vertiginous Morte Point before reaching the extensive sands of Woolacombe Beach, which is increasingly gaining a reputation as a surfer’s paradise.

A host of restaurants can be found in the surrounding area. For the freshest seafood that the North Devon Coast has to offer, S & P Fish Shop cannot be beaten for its daily catch of oysters or generous crab sandwiches. For a taste of Devon’s renowned ciders, head to the characterful The Thatched Inn just down the road from the house or to hidden The Grampus in Lee.

There are several good public and state schools in the vicinity. In Ilfracombe itself, there is the Ilfracombe Church of England Junior School and the Ilfracombe Academy that is a secondary school specialising in the arts, while slightly further afield, there is the respected West Buckland School, which encompasses both preparatory and secondary public education. Ilfracombe and the rest of the North Devon coast are best reached by the A361, which connects to Bristol by the M5 at a two-hour drive. Exeter can be reached by car in just over an hour.

The town is perhaps best known for its Victorian roots, becoming popular when the taste for seaside towns grew in England. However, there is a lot more history to Ilfracombe than its seaside baths and tidal pools.

Next to the house is the Iron Age fort of Hillsborough, formerly known as Hele’s Barrow, the second largest fort in North Devon. Its elevated position made it well-suited as a strategic lookout post. By the medieval period, the land was used for livestock grazing.

Ilfracombe’s position on the Bristol Channel meant the town became an essential stopping point on the trade route between Kinsale and Tenby and, later, a safe port from which 13th-century sieges were launched. The lighthouse, known as St Nicholas’s Chapel, constructed in 1361, is the oldest working lighthouse in the United Kingdom.

In the 1820s, a set of four tunnels were hand-carved by Welsh miners to permit access to the beaches by horse-drawn carriage as well as by foot. Previously access was gained by climbing the cliffs, rounding the point by boat, swimming or at the lowest tides clambering around the rocks of the point. These tunnels led to a pair of tidal pools, which in accordance with Victorians morals, were used for segregated male and female bathing. Whereas women were constrained to a strict dress code covering up the whole body, men generally swam naked. The tunnels are still viewable and are signposted as Tunnels Beaches