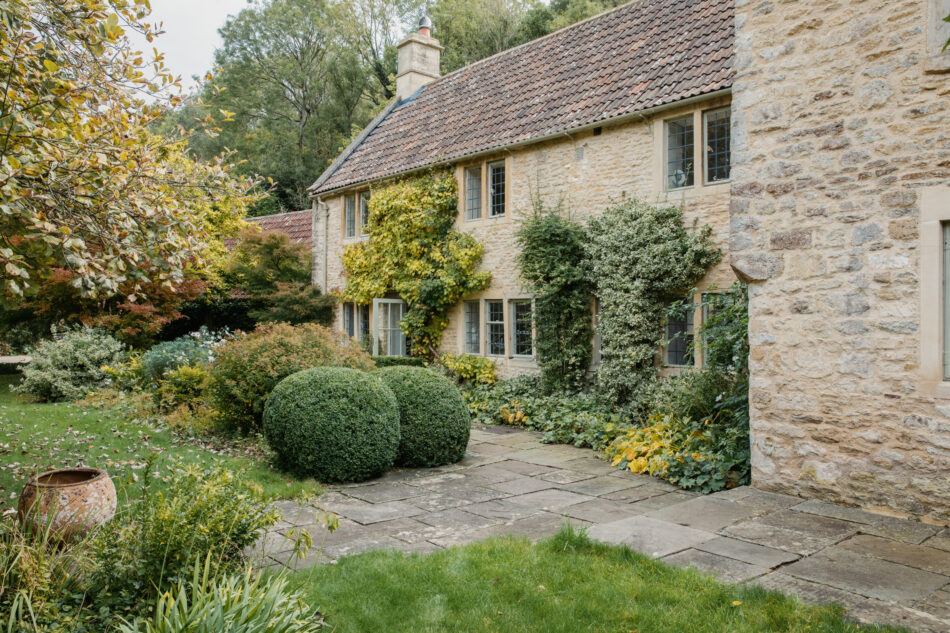 This exceptionally charming Grade II-listed four-bedroom stone cottage is enviably positioned on the edge of the pretty village of West Kington in North Wiltshire. Enveloped by almost three acres of gardens, a babbling brook passes the immediate perimeter of the cottage. Internal accommodation encompasses generous living spaces, with open inglenook fireplaces, cast-iron radiators and stone mullioned windows with leaded casement lights and shutters throughout. There are also three characterful ancillary buildings in the grounds, including a spacious studio house with secondary independent accommodation. Brilliantly positioned to enjoy the best of Wiltshire and the Cotswolds, the local villages of Castle Combe, Acton Turville and Marshfield have wonderful immediate amenities, while towns including Tetbury, Chipping Sodbury, Corsham, Malmesbury and Bradford on Avon are easily reachable by car.

The village of West Kington is nestled in the parish of Nettleton and lies in a steeply wooded valley off the Broadmead Brook. There is a remarkable sense of seclusion, and the cottage is exceptionally peaceful, positioned in a bucolic setting within a shallow vale and surrounded by nature at all aspects.

The house’s gable ends are positioned on an east-west axis so that the sun moves over the house as the day unfolds; the magical gardens offer wonderful differing vistas year round. Most of the structure is mid 15th century and it is made from rubble stone with stone mullion windows, leaded casement lights and Bridgwater tile roofs. The plan comprises three ranges, most probably an amalgamation of a series of smaller original cottages, that are believed to have been connected in their current form in the early 19th century. The ancillary buildings are thoughtfully built in a similar design, with steeply pitched Bridgwater tile roofs and elevations of local stone; the buildings all relate to one another architecturally, creating a sense of harmony within the grounds.

Discreetly hidden off Wood Lane, the long driveway winds through a wild meadow plane and leads to gates that open to a spacious pea gravel courtyard with space for several cars; the brook runs along the side of the gardens. A series of buildings form a hamlet of sorts, with white wisteria winding around the stone elevations of the cottage and climbing roses around the studio house.

The entrance to the cottage is positioned centrally, but the current owners generally prefer to use the kitchen entrance closest to the courtyard. The kitchen and dining room form a wonderfully light and convivial space, spanning almost 40 ft in length, with open hearths at either end. Rafters have been left exposed and are white-washed, and window seats are built into the deep stone walls, with the leaded casement windows looking out to both verdant aspects. The kitchen is by local Wiltshire-based company Neptune and features a large central freestanding unit with a double butler sink; cupboards are of a simple panelled design with brass ironmongery, and Silestone rests atop. A large double fridge freezer unit is housed in one open cabinet, and a dishwasher and refuse facilities are cleverly concealed behind cupboard doors. The dining area and the kitchen have open stone hearths,  a wood burner set in the former, and a warming four-door cream Aga in the latter.

The main entrance to the house forms a small lobby and currently functions as a service entrance and boot room, with a WC on one side and a spacious scullery and utility room on the other.

The sitting room is positioned in the centre of the plan, with further whitewashed exposed beams and a handsome open inglenook fireplace with a stone surround and a working fire set within. A leaded glass door opens to the exterior terrace to the rear, and an internal door opens to the bipartite drawing room at the western range of the cottage, with a large wood burner set in the open hearth and a separate study area at the end of the room.

There are two staircases in the cottage. The oldest is a slim box staircase that winds around the kitchen’s hearth in a traditional manner, while the current main set of stairs is positioned in the centre of the plan. The kitchen staircase opens to a landing with original oak floorboards and leads to two bedrooms; a white-washed timber partition wall and plank door separate these rooms and provides a brilliant vernacular architectural feature. Both these bedrooms share a spacious bathroom with a freestanding cast-iron rolltop bath.

The primary central staircase leads to two further bedrooms, one en suite, and a further bathroom. The original oak floorboards continue throughout this floor. The principal bedroom has an open-pitch roof with exposed and untreated timber joists. It also has a separate and spacious en suite bathroom, where the roof is also open-pitched, and a trio of windows look out to the gardens beyond; a dramatic double-ended slipper bath with claw feet is positioned by a fourth window at the gable end.

Exterior buildings and ancillary accommodation include the main studio house, which currently forms secondary independent living quarters to the main house. A capacious open-pitch double-height room with exposed beams comprises the main living space, with a kitchenette and separate shower room set to one side and a wood burner positioned centrally. Light floods the space through multiple window lights set into the roof’s pitch, and there is a spacious mezzanine sleeping area. The river studio is a charming, smaller, single-storey stone building with French windows opening immediately to the brook. This accommodation makes for an excellent studio or office, with a wood burner, electricity, Wifi, and a water supply.

The gardens are beautifully landscaped with a mixture of semi-formal stone terraces, lawns, a walled garden, a kitchen garden, plentiful trees, shrubs, and flowers. A steep grassy bank rises to the rear of the house, reaching up to Wood Lane in the far distance. At the front of the house, beyond the brook, are further trees and open fields. Mature specimens fill the gardens and include several varieties of apple, pear and fig trees, countless soft fruits, hydrangeas, cherry blossom and roses. Wildlife also surrounds the gardens, with birdsong carrying wonderfully through the vale in the morning and owls gently hooting in the evening.

White wisteria winds around the rear of the house to the south, offering a particularly lovely springtime vista, while the Broadmead Brook runs along the garden’s whole northern perimeter, offering a wonderful waterside idyll; there is an opportunity to set up a hammock between the trees if desired.

The orangery is positioned at the entrance to the grounds. It has a steeply pitched glass-paned roof and has been wonderfully arranged internally to form an additional sitting room away from the main house. It has stone floors underfoot and a wood burner positioned at the gable end. Mature grape vines also thrive in this space, and there is room for potting if required. Attached to the north of this building is a workshop and exterior utility room, as well as a separate wood store which is spacious enough to be used as a garage if required. Additionally, there is a pretty stone shed with a pitched roof beside the brook.

Brook Cottage is exceptionally well positioned to enjoy the best of the Wiltshire and Cotswolds countryside while also benefiting from the plentiful amenities and restaurants in the nearby historic villages and market towns. Additionally, the delights of Bath are just 20 minutes’ drive away. Highly regarded local restaurants and pubs include Sign of the Angel in Lacock, The Brasserie at Lucknam Park hotel and spa, and The Methuen Arms in Corsham. Farms shops are dotted around the area, as are independent provisors in the surrounding villages. Still, branches of Waitrose are conveniently located in both Bath and Chippenham and deliver to West Kington.

Situated in the southern part of the Cotswolds National Landscape AONB, the cottage is brilliantly positioned for the countless walks in the area, with many extending all the way to Chipping Campden in North Gloucestershire.

Transport links are excellent, with junction 18 on the M4 just four miles’ drive away; Bristol Airport is just one hour away, Heathrow Airport 90 minutes and central London is two hours by car. London Paddington can be reached by train via Chippenham station in 90 minutes door-to-door.

Please note that all areas, measurements and distances given in these particulars are approximate and rounded. The text, photographs and floor plans are for general guidance only. Inigo has not tested any services, appliances or specific fittings — prospective purchasers are advised to inspect the property themselves. All fixtures, fittings and furniture not specifically itemised within these particulars are deemed removable by the vendor.
Brook Cottage — West Kington, Wiltshire
Interested? Let’s talk