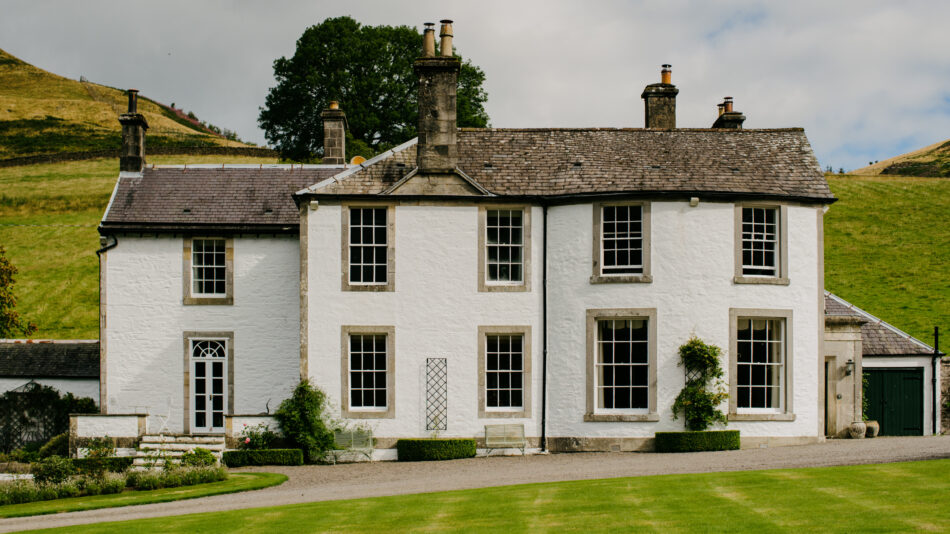 Nestled in the rolling hills of the Scottish Borders, this wonderful house was built as Westerkirk Parish Manse in 1783

Set in the pastoral Scottish borders, this Grade B-listed traditional manse is ensconced in rolling hills adjacent to the meandering River Esk. Built in the 18th century, the house was formerly the vicarage for the pretty Westerkirk church nearby. Internal accommodation extends to approximately 4,700 sq ft across three storeys; it includes five bedrooms with two further attic rooms. Outside, extensive and mainly south-facing grounds abound with mature borders creating a high degree of privacy with exceptional views of the surrounding countryside.

Located in the tiny hamlet of Bentpath, the house was built as Westerkirk Parish Manse in 1783. Renovations and extensions were made in both the 19th and 20th centuries, including additions by R B Burnet, a local Langholm architect, circa 1910. An extensive renovation was completed ten years ago, including an overhaul to the electrics and plumbing.

The house is approached via a stone bridge over the River Esk. Skirting the old church, the lane opens to a sweeping drive leading to the house and the surrounding gardens and hills. The whitewashed and rendered façade has ashlar stone margins, and the curved eastern bay façade comprises 12-pane sash windows. The house was carefully conceived and positioned facing due south, allowing it to take in the maximum light. The northern face is protected by a gently rising hill, sheltering it from the wind and weather. For more information, please see the History section.

Entering the house from the eastern side (adjoining the later garage) through a porch vestibule with a convenient WC, the space opens onto a generous hall with curving architrave and panelled column detailing. The bright and airy library is inviting, with a substantial Tonwerk Stove filling the space with warmth. Wych elm timber floorboards, felled and seasoned locally from a nearby Dumfriesshire estate, run underfoot, and a neutral palette accentuates the airy proportions. The dramatic drawing room, opposite the library, has a curvilinear exterior wall that gives the space a sense of grandeur. With large windows, original shutters overlooking the grounds, and a period fireplace, the room is a beautiful space for entertaining.

The large dining room is accented by similarly large sash windows overlooking the gardens; a centrally-placed fireplace stylistically anchors the room. A large kitchen to the west of the plan has an electric Aga and ample space for a kitchen table, providing an informal and cosy living space. French doors from the kitchen open onto an ideally situated west-facing terrace perfect for watching the sunsets over the hills. To the rear of the kitchen, a good-sized boot room and laundry room ensure that the muddier side of country living is easily managed. A cosy snug completes the ground floor and is currently used as a family room. A cellar is accessed from the snug via original stone steps and provides excellent wine storage.

A grand staircase with striking ironwork balusters ascends to the first floor. Arranged around a wide central corridor, the primary bedroom with en suite bathroom enjoys the same curved bay wall as the drawing room below, allowing plenty of light and framing beautiful views. A large second bedroom to the front of the plan enjoys similar views as does the third bedroom to the west of the plan. There are two further bedrooms to the rear of the plan with the family bathroom and a smaller second bathroom. The fifth bedroom can be closed off to create an entirely separate guest suite. The attic area has been beautifully reimagined as two large rooms suitable as airy bedrooms or office space. Filled with light from four skylights, the substantial original roof beams with shaped braces frame the space with rustic beauty.

An expansive garden surrounds the house stretching to nearly 1.25 acres. Enclosed by an ashlar-coped rubble-built wall and mature hedge, a vegetable garden and established orchard lie to the west of the house, accented with a greenhouse and summer house. An arched yew hedgerow is framed by a mature border full of echinops, crocosmia, roses and hostas. A manicured lawn stretches out in front of the house with the drive meandering through it. Views of the pretty 19th-century Westerkirk church and a stunning copper beech tree frame the southern end of the plot. Rising to the north of the house, rolling Scottish hills are alternatively clothed in yellow gorse or purple heather throughout the year.

The undeniable appeal of the house is its rural position. Nevertheless, the little hamlet of Bentpath is not far from the charming town of Langholm, which has good shops and services, a golf course, a cottage hospital and the Buccleuch Centre, which is a modern theatre and arts venue. Referred to nostalgically by its past nickname of “Muckle Toon”, it was once a bustling textile town. Famous for the annual Common Riding, which happens every year in July to commemorate a traditional marking of borders. The event involves epic horse-riding, athletics, dancing, a giant thistle and much pageantry.

The largest Buddhist temple in western Europe, Same Lling, lies just up the road from the house in Eskdalemuir and offers a number of courses and retreats, as well as being a fascinating cultural centre.

The region boasts some of the most impressive countryside in Scotland, and a wide range of country pursuits are available. The River Esk, one of Scotland’s great salmon rivers, flows through Langholm, and permits are available for game fishing. The area also provides excellent walking opportunities with waymarked routes through the surrounding hills.

The area offers miles of unspoilt countryside to explore whilst offering easy access to the Scottish Borders, Cumbria, Glasgow and Edinburgh. Carlisle railway station is a 40-minute drive with fast direct trains to London (3 hours 20 minutes). The station at Lockerbie is just over 30 minutes away, with regular train services to Glasgow and Edinburgh of 55 minutes.

The church at Bentpath is part of the ancient Westerkirk parish, which was granted to Melrose Abbey by John de Graham, Lord of Westerkirk, in 1321. Both parsonage and vicarage revenues were attached to the Abbey, which continued until the Reformation. The present parish church of Westerkirk was built in 1889 on the earlier 18th-century site, which had replaced the medieval structures. The chapel of Westerkirk is mentioned as early as 1391. Westerkirk Parish Library nearby is today one of the oldest lending libraries in Scotland still lending books.

The surrounding area is famous as the birthplace of Thomas Telford in 1757, with Telford’s father buried in Westerkirk. Hugh McDiarmid, perhaps Scotland’s greatest modern poet, was born in nearby Langholm and is commemorated by the nearby McDiarmid Trail leading to its Memorial. A further claim to fame for Langholm is that the Langholm Town Band is reputedly the oldest brass band in Scotland.