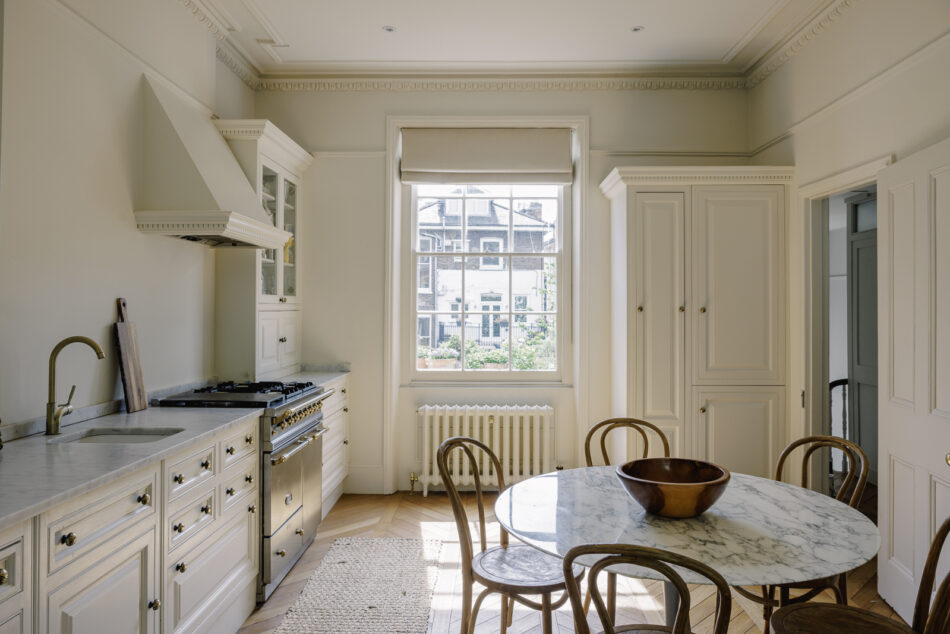 One of the only listed buildings in Belsize Park, with carefully restored original details and beautiful leafy views

This three-bedroom home on Belsize Lane occupies the top three floors of one of eight handsome, Grade II-listed houses. It has a south-facing roof terrace and has been lovingly restored by the current owner to create a refined and light-filled home that celebrates its incredible proportions.

The mid-19th century house is one of the few listed buildings in Belsize Park. It has a lovely white-stuccoed exterior and an entrance characterised by an ornate raised doorway, flanked by decorative pilaster jambs that carry sculptural cornices, and a door complete with overlights and two glazed panels. On the raised first floor are two large sash windows, linked by a romantic continuous cast-iron balcony.

The current owner has done much to restore the apartment to its former glory; from rewiring, replumbing and adding extra sound insulation, to laying a Fougère oak parquet floor sourced from a traditional manufacturer in Escurolles, in deepest rural France, and installing a Clive Christian kitchen with marble worktops.

Stone steps flanked by cast-iron railings ascend to the raised ground floor communal entrance. A large glazed door opens into the apartment’s wide, private hallway, where there is space for hanging coats and storing shoes. A staircase ascends past a large sash window, which is framed by a floor-to-ceiling bookcase and looks onto leafy views of nearby gardens and the backs of houses.

An open-plan kitchen, dining and living room with wonderfully high ceilings lies on the piano nobile of the building. Towards the back of the apartment is the Clive Christian kitchen, which enjoys views over the neighbouring gardens and has an open shelf that is perfect for displaying potted plants. Richly coloured parquet runs underfoot, while walls painted in three shades of ‘Sand’ by Paint & Paper Library create a sense of serenity. There is bespoke cabinetry, a butler sink and a wonderful Lacanche stove, plus double doors that open into a voluminous living room.

This room is bathed in light through two floor-to-ceiling sash windows to one side, with ceilings crowned by original decorative cornicing, smart panelled walls and parquet flooring. A distinguished fireplace with a marble surround provides a focal point on one side of the room; installed by the current owner, it comprises a late Georgian/early Regency cast-iron grate with delicate floral decoration of Anthemion, Honeysuckle and Palmette in the Greek Revival manner. Foundry marks show that it was made by the Carron Company of Falkirk, and likely produced on the cusp of the 19th century. There is also a guest WC on this floor, discreetly tucked behind panelling under the stairs.

Two double bedrooms and a large shared bathroom lie on the second floor. The bedrooms are painted in calming, muted colours, while the bathroom is lined with parquet floor tiles. There is a freestanding bath, a separate walk-in shower and Lefroy Brooks taps. There is a third double bedroom on the top floor, with a long window that frames expansive views over London, as well as a luxurious cast-iron bath atop marble tiles with underfloor heating. There is also a separate en suite shower room.

French doors open onto the south-facing roof terrace, which is a real sun trap and enjoys copious amounts of late afternoon sunshine. With space for a table and chairs, it is the perfect spot for a morning coffee, or lunches in the summer.

There are plenty of larger green spaces nearby including Primrose Hill and Regent’s Park, which are a short walk from the apartment.

Belsize Lane is in a fantastic position, just a short walk from the shops, delis, restaurants and pubs of Belsize Village and Swiss Cottage. Hampstead Theatre, two cinemas including an Everyman, a gym and a spa are all within walking distance, as is the Waitrose on Finchley Road. To the north, Hampstead Village and the vast open spaces of Hampstead Heath are easily accessible. Many of London’s best independent schools are within walking distance of the house including The Hall, St Antony’s, South Hampstead High School, St Christopher’s, Trevor Roberts and Sarum Hall.

Please note that all areas, measurements and distances given in these particulars are approximate and rounded. The text, photographs and floor plans are for general guidance only. Inigo has not tested any services, appliances or specific fittings — prospective purchasers are advised to inspect the property themselves. All fixtures, fittings and furniture not specifically itemised within these particulars are deemed removable by the vendor.
Belsize Lane — London NW3
Interested? Let’s talk