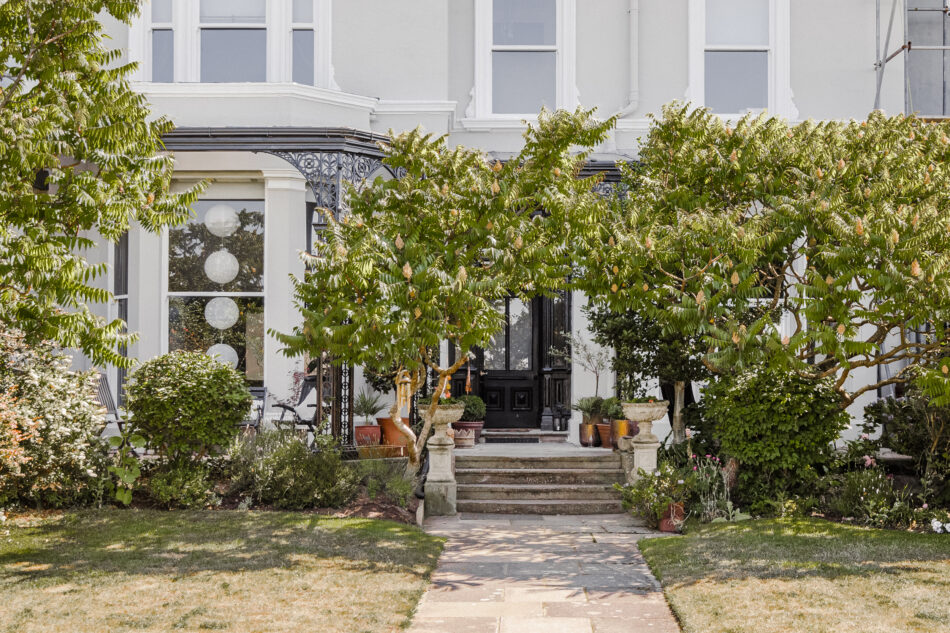 One of the most desirable addresses in the north of England

Occupying an unrivalled position on Beach Lawn in Liverpool, this grand eight-bedroom Grade II-listed Victorian house is wonderfully elegant. Forming part of a terrace that adjoins the Crosby Coastal Park, it has commanding views over the estuary and across towards the Wirral and the Welsh mountains beyond. The house has been refurbished, carefully preserving original features while introducing an atmospheric colour scheme that complements the dark marble accents throughout. Natural light pours in through full-length windows that draw the eye to the exceptional surroundings. The house is surrounded by mature and verdant gardens.

Beach Lawn looks directly onto Crosby Beach and over to the River Mersey. The land, which this row of 15 houses now occupies, was formerly owned by the Ismay family, who were proprietors of the White Star Line shipping company of Titanic infamy. The rest of the terrace of houses were predominantly owned by Liverpool’s merchants, who apparently used to watch their ships floating up the Mersey.

The area between Beach Lawn and the River Mersey is a designated Coastal Park, which means the house has extensive views of the rugged landscape. This particular house is part of a five-house terrace that was constructed in the mid-to-late 19th century. In a nod to Victorian eclecticism, the façade is characterised by Italianate features, including stucco detailing, wrought-iron verandas and pilastered bay windows.

Entrance to the house is through the imposing square-headed black doorway into a spacious tripartite hall. Radiating off the space are the living areas, comprising two formal sitting rooms at the front of the house, which share views over the front garden; at the rear is another living space, as well as the expansive open-plan kitchen and dining room. Each room has been painted a rich colour, from purples to dark blues. In the drawing room, there is original intricate cornicing, as well as an imposing marble fireplace with a warming gas stove. Large full-length triple sash windows, framed by dark-painted panelling, ensure the room is filled with natural light.

The kitchen has beautiful parquet floors and is composed of contemporary black cabinetry set against stainless steel worktops. The range cooker is found in an arched alcove, clad in black tiles. An adjoining utility room provides additional storage space and room for white goods. The spacious dining room has pitch pine floors.

A wrought-iron staircase leads to the first floor with a generous landing, where white surrounds are accented by bold black doorframes. These lead to four bedrooms, one of which is painted a moody ‘Off Black’ by Farrow & Ball, that offsets the gold tiling in the fireplace. A further four bedrooms are situated on the second floor, offering ample space and privacy for guests. To the front lies a large office and a further bedroom, both with white-shuttered casement windows that frame picture-perfect views of the Coastal Park.

Numerous bathrooms are dispersed throughout the house with a range of facilities, from freestanding baths to rainfall showers and guest WCs. The style of the bathrooms is consistent with the rest of the house’s interior, with a décor of black-and-white tiling, black marble and chrome finishes.

On the lower-ground floor is a further sequence of rooms that can serve a multitude of purposes. In their current guise, one is used as a workshop, another as a gym, while a fully equipped kitchen and bathroom meaning that the floor can function as an independent entity.

The garage offers space for multiple cars and storage.

Extensive gardens surround the house at the front and rear. The approach to the house from Beach Lawn is via a paved path that cuts decisively through the lawn towards a patio with a wrought-iron veranda that supports, decked with jasmine and passion flower. The elevated patio has fantastic views and plenty of space for garden furniture.

There is access to the rear garden from both the ground and lower-ground floors. An extensive lawn is flanked by mature shrubbery that provides ample shade on summer days. At the end of the garden, a characterful gate leads to the mews garage.

Beach Lawn is one of the most desirable addresses in the north of England. It is a no-through road overlooking the beautifully maintained Crosby Coastal Park and the breathtaking coastline of Crosby Beach beyond. In the distance, the mountains of Snowdonia can be seen. There are numerous coastal walking trails on the doorstep. A short distance to the north, further dramatic coastline can be found at the National Trust Reserve Formby Beach, known for its sand dunes and its population of rare native red squirrels.

The charming villages of Freshfield and Formby are 20-minutes away and offer a wide array of conveniences, including a Waitrose, numerous independent coffee shops, restaurants and pubs. The area lies at the centre of England’s Golf Coast, home to three Royal courses, including Royal Birkdale, which is a 25-minute drive from the house.

Schooling is exceptional in the area and includes Merchant Taylor’s Boys and Girls schools, which are 5 minutes by car.

Waterloo is the closest station, less than five minutes’ walk. The station runs direct trains to Liverpool Central (about 15 minutes) every 15 minutes. Connections to Liverpool Lime Street are a two-minute journey. From here, trains run frequently to Manchester in under 40 minutes and London Euston in under two-hours and 25 minutes. Alternatively, Liverpool city centre is easily accessible by car in under 20 minutes. Liverpool John Lennon Airport can be accessed directly from Waterloo train station (approx. 40 minutes), or alternatively, it is a 35-minute drive.

Please note that all areas, measurements and distances given in these particulars are approximate and rounded. The text, photographs and floor plans are for general guidance only. Inigo has not tested any services, appliances or specific fittings — prospective purchasers are advised to inspect the property themselves. All fixtures, fittings and furniture not specifically itemised within these particulars are deemed removable by the vendor.
Beach Lawn II — Liverpool, Merseyside
Interested? Let’s talk